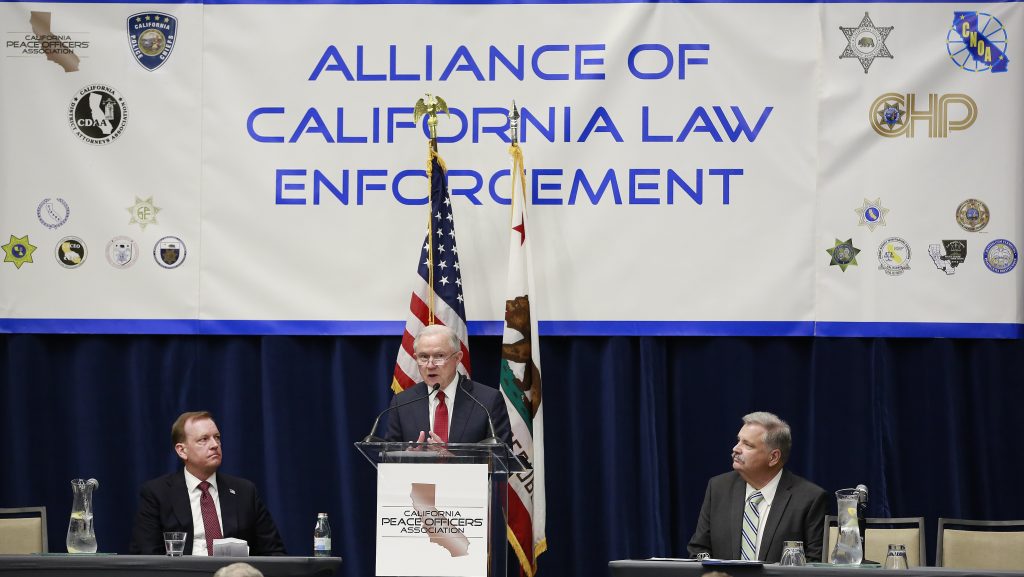 California Gov. Jerry Brown denounced U.S. Attorney General Jeff Sessions for coming to the state to speak about a lawsuit targeting policies that limit cooperation with federal immigration authorities, saying Wednesday it was unprecedented for him to “act more like Fox News than a law enforcement officer.”

“What Jeff Sessions said is simply not true and I call upon him to apologize to the people of California for bringing the mendacity of Washington to California,” Gov. Brown told reporters.

“How dare you?” he said of Schaaf at a California Peace Officers Association meeting in Sacramento. “How dare you needlessly endanger the lives of law enforcement just to promote your radical open borders agenda?”

The Justice Department, in a federal lawsuit filed Tuesday in Sacramento, is challenging three California laws that bar police from asking people about their citizenship status or participating in federal immigration enforcement activities.

“It wasn’t something I chose to do, but I can’t sit by idly while the lawful authority of federal officers are being blocked by legislative acts and politicians,” Sessions said, straying from his prepared remarks.

More than a dozen attendees in a room of about 200 people gave the attorney general a standing ovation.

The lawsuit is the latest salvo in an escalating feud between the Trump administration and California, which has resisted the president on issues from taxes to marijuana policy and defiantly refuses to help federal agents detain and deport immigrants. U.S. Immigration and Customs Enforcement has said it will increase its presence in California, and Sessions wants to cut off funding to jurisdictions that won’t cooperate.

“I say: Bring it on,” said California Senate President Pro Tem Kevin de Leon, a Los Angeles Democrat who wrote the so-called sanctuary state bill. Democratic Assembly Speaker Anthony Rendon was among those suggesting that Sessions shouldn’t come at all.

The lawsuit was filed as the Justice Department also reviews Schaaf’s decision to warn of an immigration sweep in advance, which ICE said allowed hundreds of immigrants to elude detention. Schaaf said Tuesday that the city would “continue to inform all residents about their constitutional rights.”

The California laws were passed in response to Pres. Trump’s promises to sharply ramp up the deportation of people living in the U.S. illegally.

One prohibits employers from letting immigration agents enter worksites or view employee files without a subpoena or warrant, an effort to prevent workplace raids. Another stops local governments from contracting with for-profit companies and ICE to hold immigrants. Justice Department officials said that violates the Constitution’s supremacy clause, which renders invalid state laws that conflict with federal ones.

The Supreme Court reinforced the federal government’s primacy in enforcing immigration law when it blocked much of Arizona’s tough 2010 immigration law on similar grounds. The high court found several key provisions undermined federal immigration law, though it upheld a provision requiring officers, while enforcing other laws, to question the immigration status of people suspected of being in the country illegally.

In this case, California “has chosen to purposefully contradict the will and responsibility of Congress to protect our homeland,” Homeland Security Secretary Kirstjen Nielsen said in a statement.

Dozens of demonstrators chanted “stand up, fight back” and “no justice, no peace” outside the hotel where the meeting was held and some blocked traffic on a major thoroughfare. A heavy police presence was on hand.

Demonstrator Henry Gordon of Sacramento said he hopes Sessions gets the message that Californians will resist efforts to separate families and deport immigrants.

Attorney General of California Xavier Becerra, who is up for election in November, said sanctuary policies increase public safety by promoting trust between immigrant communities and law enforcement, while allowing police resources to be used to fight other crimes.

“We’re in the business of public safety, not deportation,” he said.