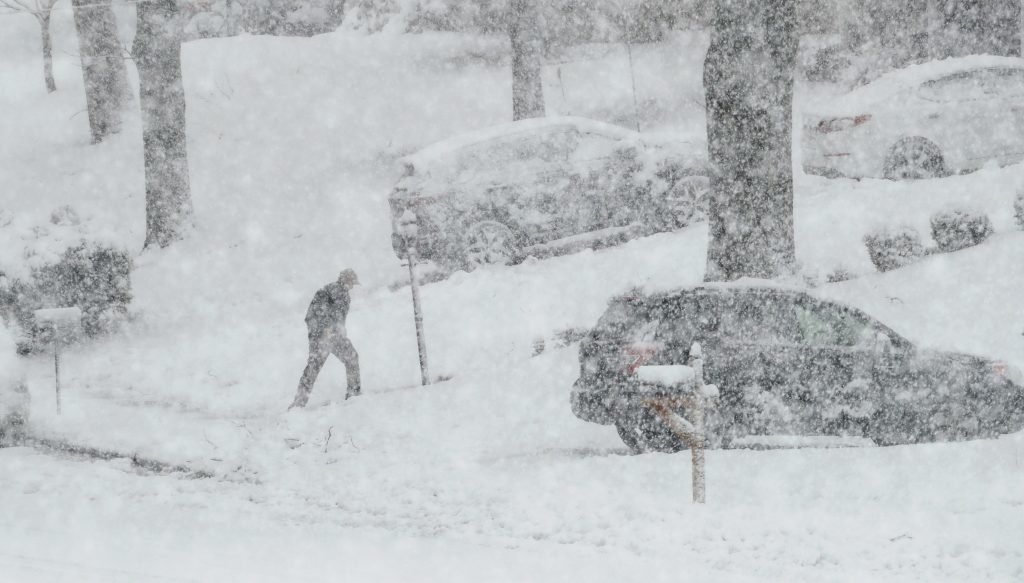 The second big, blustery storm to hit the Northeast in less than a week brought wet, heavy snow Wednesday to a corner of the country where tens of thousands of people were still waiting for the power to come back on from the previous bout.

The nor’easter closed schools, businesses and government offices, grounded thousands of flights and raised fears of another round of fallen trees and electrical outages as it made its way up the East Coast.

It also produced “thundersnow,” with flashes of lightning and booming thunder from the Philadelphia area to New York City.

“I don’t think I’m ready for this to happen again,” Caprice Dantzler, 32, said as she walked through Philadelphia’s snowy, rainy Rittenhouse Square. She said many trees that had crashed into cars and homes and blocked streets during the last storm had yet to be removed.

A mix of snow and light rain fell before daybreak in many areas, then began turning to all snow, making driving treacherous.

The National Weather Service issued a winter storm warning into Thursday morning from the Philadelphia area through most of New England. Forecasters said areas west of the Interstate 95 corridor could easily get more than a foot of snow, with some places in northwestern New Jersey expected to receive up to 2 feet.

More than 2,000 flights across the region — 1,700 in the New York metro area alone — were canceled, a number expected to climb as conditions deteriorate.

The morning commute went smoothly in most areas, as the storm had not yet kicked into high gear. But motorists were urged to avoid travel so crews could treat and clear roads. Pennsylvania and New York banned big rigs from some major highways.

“I’m not looking forward to another round of this, but it is what it is,” Chris Martin said as he prepared to leave his Toms River, New Jersey, home and head to work at an information technology firm in Philadelphia. “All in all, it hasn’t been a terrible winter.”

Martin had already arranged to stay in Philadelphia overnight.

“If Mother Nature wants to give us one last blast of winter, that’s up to her,” he said.

Heavy, wet snow and gusting winds could take down trees already weakened by last Friday’s storm and snap power lines, to the distress of customers who have gone days without power.

Utility workers took advantage of milder temperatures and sunshine Tuesday in their scramble to restore electricity around the Northeast. More than 90,000 homes and businesses remained without power Wednesday, mostly in Pennsylvania, New Jersey and New York.

Ten people were taken to hospitals with symptoms of carbon monoxide poisoning after running a generator inside a home in North White Plains, New York, police said. All were expected to survive.

Some areas were bracing for as much as two to three inches of snow an hour. Gusts of up to 60 mph were forecast on Cape Cod, 45 mph at the Jersey shore and 30 mph around suburban Philadelphia.

As of midafternoon, some places in Pennsylvania, New Jersey and the New York City area had over six inches of snow.

Depending on the storm’s track, the I-95 corridor — which runs through the Northeast’s major urban areas — could see heavy rain, heavy snow or a mix of the two.

Transportation departments in Philadelphia and Boston loaded up salt trucks and treated roads a day ahead.

Amtrak canceled some train service, and commuter trains in Philadelphia were put on a weekend schedule.

School districts and municipal operations around Pennsylvania and Connecticut closed. The governors of New Jersey and Pennsylvania declared states of emergency.

Officials warned homeowners of the danger of heart attacks from shoveling heavy snow.

One slight consolation: The storm was not expected to bring coastal flooding like the one last week. Some New England and New Jersey shoreline communities were still dealing with the effects of that storm.