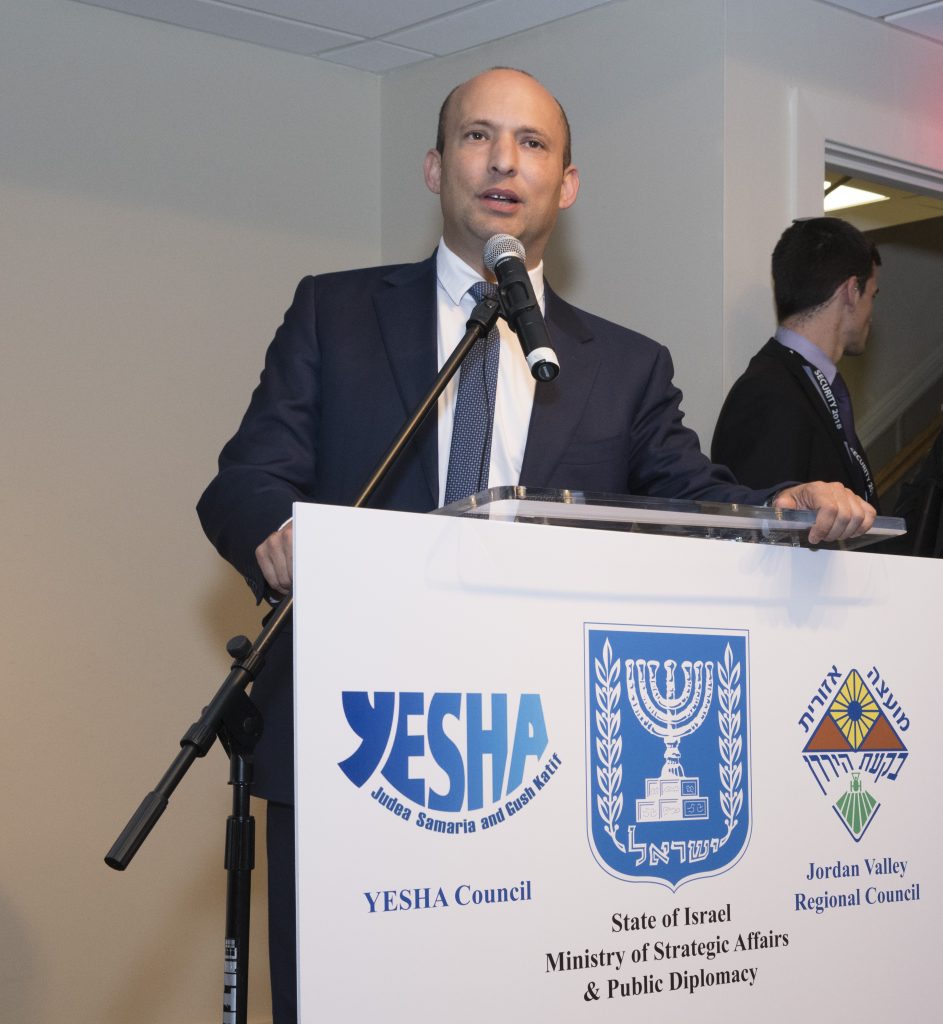 Right-wing Israeli politicians, leaders of Jewish communities in Yehudah and Shomron (Yesha), and activists held an independent event several blocks from the AIPAC conference center Monday, featuring products from the fields and vineyards of Yesha and impassioned speeches calling for the defense of the region’s legitimacy as part of Israel, and against a two-state solution to the Israeli-Palestinian conflict.

The event was sponsored by Israel’s Ministry of Strategic Affairs and Public Diplomacy, under the leadership of Minister Gilad Erdan; the Yesha Council; and the Jordan Valley Regional Council.

“The time has come to embrace the 600,000 Jews in Judea and Samaria,” declared Yishai Fleisher, spokesman for the community of Chevron and a radio personality. “The time has come for alternatives to the two-state solution.” Fleisher said that the old paradigm of “land for peace has failed,” and that we must explore other options to “figure out best way for other people to live among us in peace and security.”

“Some people fail to understand,” said MK Yuval Steinitz, Minister of National Infrastructure, Energy and Water Resources, “that when they call to boycott the settlements, they also mean ‘settlements’ like Be’er Sheva, Ashdod, Tel Aviv and Haifa.”

“Israel cannot survive without Yesha,” said Steinitz, who argued that it would be impossible to defend cities like Tel Aviv and Yerushalayim if Yesha were “in the hands of our enemies.”

That, said the minister, is a “geographic and strategic reality.”

Moreover, “if BDS would succeed, it would just be the beginning; then we’d see it is not just about Yesha.”

To those who say they support Israel but oppose settlements, Dani Dayan, Consul General of Israel in New York and former Chairman of the Yesha Council, said, “You can hold your positions, and others can hold theirs. But refraining from visiting, refraining from talking, buying, embracing, knowing each other – that is bigotry.

“That is why we say clearly, and first and foremost to our Jewish brothers and sisters in Israel and the United States of America: A failure to visit, a failure to know, [and a failure] to buy from Judea and Samaria is support for BDS.”

Erdan, addressing the participants by video, said that the BDS movement is simply an “anti-Semitic hate campaign” whose “real goal [is] the destruction of Israel as a Jewish state.”

Education and Diaspora Affairs Minister Naftali Bennett, an outspoken opponent of the two-state solution, said that “the world does not respect a nation that’s willing to give up its homeland. The world respects a nation that respects itself.”

“I don’t want to govern them. They should continue having their entity, autonomy – it’s not the only unique structure in the world.”

To those who say “give it a try” to a Palestinian state, Bennett’s response is, “Go fix Gaza … then we’ll talk.”

Bennett says that Israel must pass the Sovereignty Plan, to apply Israeli law to Yesha.

Oded Revivi, the Yesha Council’s Chief Foreign Envoy, highlighted how the products produced in Yesha, including many presented at the event, were made by both Arab and Jewish workers, working side by side in harmony. The BDS movement threatens not only Jewish jobs, but Arab jobs as well, in addition to threatening to harm truly harmonious intercommunal relationships, said Revivi.

“These are living examples of islands of peace, where Jews and Arabs are standing one alongside the other, doing whatever jobs they do in order to manufacture items of peace,” said Revivi. “And the byproduct of their working together is friendly, warm relationships, understanding, the building of bridges and true caring of one for another.”

“If we open more industrial areas, have more Jews working alongside Arabs, we will spread the word that peace is actually existing in our region.”

This year’s version of Yesha’s independent event featured an overflow crowd of several hundred at a social hall near the AIPAC location, a significant increase in turnout in this, the event’s third year.

The Yesha Council has never been invited to present its perspective at AIPAC. Though the Council members and event coordinators and speakers all attended AIPAC events, they also hold this event to highlight their position in support of Yesha communities as a way of combating delegitimization of Israel, and against a two-state solution.

“We believe the AIPAC leadership understands that many of its rank and file support the positions of the Yesha Council,” Elie Pieprz, Director of International Affairs for Yesha Council, told Hamodia. “And perhaps that is why AIPAC, leery of an enthusiastic response from the audience, hasn’t invited Yesha Council members to present at the Conference.”