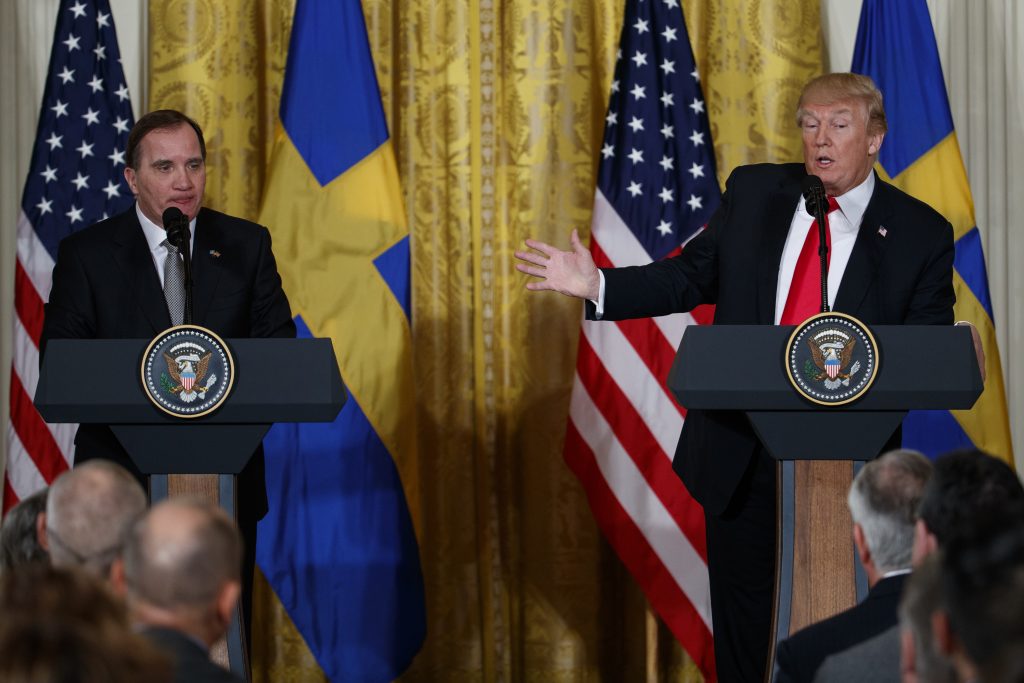 President Donald Trump said Tuesday that he’s not worried that Moscow will meddle in the upcoming midterm elections because the U.S. will take steps to prevent it. “Whatever they do, we’ll counteract it very strongly,” the president said.

Pres. Trump acknowledged that Russia interfered in the presidential election, but said it had no impact on the U.S. vote tally. “Certainly, there was meddling and probably there was meddling from other countries and maybe other individuals,” he said at a news conference with Swedish Prime Minister Stefan Löfven at the White House.

Pres. Trump said his administration is conducting a deep study and will have strong suggestions on protecting the midterms and beyond.

“You have to be very vigilant,” Pres. Trump said. “And one of the things we’re learning it is always good — it’s old-fashioned — but it’s always good to have a paper backup system of voting. It’s called paper. Not highly complex computers. Paper. A lot of states are going to a paper backup.”

Also Tuesday, the nation’s top intelligence official said the Trump administration was getting ready to slap new sanctions on Russians over Moscow’s meddling in the presidential election.

The Trump administration was harshly criticized for not imposing new sanctions in January when a list of 114 Russian politicians and 96 oligarchs was released to comply with a law Congress passed to punish Moscow for interfering in the 2016 U.S. election.

Questioned about why no new sanctions have been issued, National Intelligence Director Dan Coats said they were forthcoming. Treasury Secretary Steven Mnuchin “is going to be announcing those within a week,” Coats told members of the Senate Armed Services Committee where he testified about worldwide threats.

Coats said sanctions are expected against at least some of the 13 Russians accused in an indictment of an elaborate plot to disrupt the election. The indictment issued by the U.S. special counsel charged them with running a huge but hidden social media trolling campaign aimed in part at helping Pres. Trump win.

The federal indictment represents the most detailed allegations to date of illegal Russian meddling during the campaign that sent Pres. Trump to the White House. The criminal charges are also the first against Russians believed to have secretly worked to influence the outcome. Russian President Vladimir Putin said they didn’t work on behalf of his government.

Coats suggested that sanctions also could be imposed on additional individuals as well.

Last week, Lt. Gen. Paul Nakasone, the next head of U.S. Cyber Command and the National Security Agency, told the Senate committee that nations including China and Russia that launch cyberattacks against the U.S. don’t fear retribution and see no reason to change their behavior.

The committee voted during Tuesday’s hearing to confirm Nakasone to his new position.

As they did with Nakasone, frustrated committee members peppered Coats with questions about what the U.S. was doing to punish nations that infiltrate government networks, steal data from contractors or try to influence American elections.

Coats agreed that the U.S. must do more to deter attacks. He said the Trump administration’s national security team was discussing a range of threats facing the U.S. But he said: “There has not been yet a formulation yet of a lead agency that would work with Congress on legislative action and putting a policy in place.”

“When are we going to expect an actual cyber plan from this administration?” Heinrich asked.

Sen. Richard Blumenthal, D-Conn., asked Coats whether Pres. Trump had ever given him orders to retaliate against Russia. Coats said there were things the administration is doing, but they could only be discussed in a classified session.