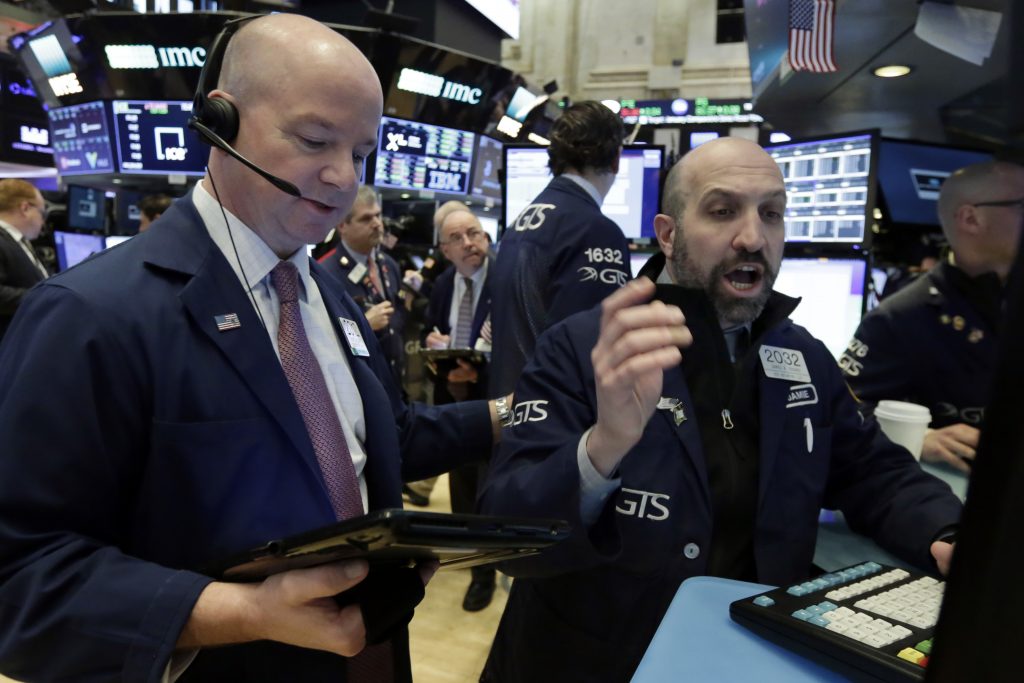 U.S. stocks continue to wobble, and major indexes are mixed at midday Tuesday as household goods makers and health-care companies fall while technology companies rise. Investors continue to look for hints about how the Trump administration’s recently-announced tariffs will affect international trade. Asian stock indexes jumped after the North Korean government said it was open to talks with the U.S. about ending its nuclear program.

Most of the stocks on the New York Stock Exchange traded higher.

TRADE WINDS: Stocks fell 3.7 percent during a three-day losing streak last week after President Donald Trump announced plans for steep tariffs on steel and aluminum. At the same time, other countries and the European Union announced plans to put tariffs on some U.S.-made goods, and investors feared that was the start of a conflict that would restrict trade and company profits.

Over the last few days, the market has bounced back and forth as investors hoped that a full-blown global trade war won’t break out. House Speaker Paul Ryan spoke up against the proposed tariffs Tuesday and called for a “more surgical approach” that might cause less of a backlash. After initially suggesting there wouldn’t be any exceptions to the tariffs, Trump said he could grant exemptions to Canada and Mexico if they come to terms on a new trade deal.

KOREAN TALKS? Asian markets climbed after North Korea said it is willing to start talks with the U.S. on denuclearization. It also said it would stop nuclear and missile tests during those discussions. The Kospi in Seoul jumped 1.5 percent while Tokyo’s Nikkei 225 rose 1.8 percent. Hong Kong’s Hang Seng index climbed 2.1 percent.

BONDS: Bond prices turned higher. The yield on the 10-year Treasury note slipped to 2.86 percent from 2.88 percent. That affected banks, as lower interest rates mean they can’t make as much money from lending. Wells Fargo lost 59 cents, or 1 percent, to $57 while Capital One gave up 83 cents to $97.07.

OFF TARGET: Target lost $2.64, or 3.5 percent, to $72.51 after it reported that costs associated with overhauling its stores and investing in its website affected its earnings and its forecasts for the current year.

BOARD BATTLE: Qualcomm fell and Broadcom rose after Bloomberg News reported that Broadcom is on track to get more leverage in its effort to buy Qualcomm, which wants Broadcom to make a richer offer. Bloomberg reported that so far, directors backed by Broadcom are on pace to win six seats on Qualcomm’s board. Qualcomm’s current board opposes Broadcom’s $117 billion bid for the company and says the price is too low, while a board supported by Broadcom would likely accept the offer instead.

FAMILY FEUD: Nordstrom declined 19 cents to $51.71 after the department store rejected an offer from the Nordstrom family to take it private. It said the price of $50 a share was too low, and it was beneath the stocks’ closing price on Monday. The family group includes co-presidents Blake, Peter and Erik Nordstrom. They and other family members own 30 percent of Nordstrom’s stock.

JAMMED UP: J.M. Smucker lost $1.98, or 1.5 percent, to $128.04 after the Federal Trade Commission moved to block its purchase of the Wesson oil brand. It said the purchase could create a monopoly in the canola and vegetable oil markets because Smucker already owns the Crisco brand. Wesson’s owner, Conagra, rose 1 cent to $37.80, and the companies said they will review the complaint and consider their options.