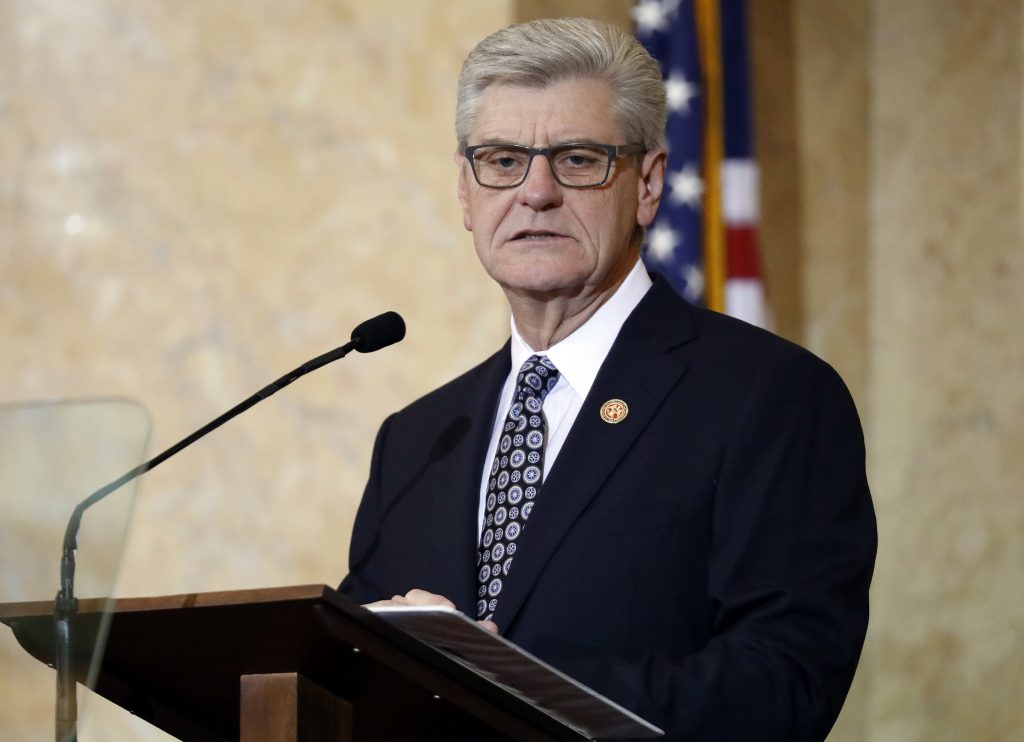 Mississippi’s Republican governor took himself out of the mix Tuesday for the U.S. Senate seat being vacated by Thad Cochran, saying he’ll find another strong contender to keep the seat firmly in GOP hands for decades, as Cochran did.

“There’s something nefarious about the idea of a governor appointing himself. Washington’s not where I want to be just now,” Gov. Phil Bryant told reporters.

Cochran, 80, announced Monday that he is stepping down because of poor health. Bryant said he will choose a temporary successor for Cochran after the senator’s April 1 resignation.

A special election will be held in November to fill the rest of Cochran’s term, which ends in January 2021.

With Republicans trying to hold onto their slim Senate majority, pressure is building on Bryant to appoint someone who can keep the GOP’s historical lock on the seat. Some senators have said President Donald Trump and Senate Majority Leader Mitch McConnell of Kentucky encouraged Bryant to move himself to the Senate. Bryant, however, said he wants to finish his second and final term as governor, which ends in January 2020.

Democrats achieved a rare victory in the solid Republican South in December, when Doug Jones defeated the GOP’s Roy Moore in a special election in Alabama.

Bryant said he will choose someone who will run in the special election, which could attract multiple candidates across party lines.

Cochran and fellow Republican Lott were both elected to the U.S. House in 1972. Cochran won a Senate seat in 1978 and Lott won one in 1988, becoming the Senate’s Republican leader before resigning abruptly in late 2007.

With Cochran’s departure, Mississippi has two U.S. Senate seats on the ballot this year. Republican Sen. Roger Wicker is already up for re-election in the deeply conservative state.

Republicans are worried that one or both of Mississippi’s Senate seats could be in jeopardy unless a top replacement is named for Cochran. Cochran’s chief of staff, Brad White, said the appointment Bryant makes “will be remembered for decades to come.”

“The control of the U.S. Senate may ride on it,” White said.

Bryant has not released names of people he will consider appointing, though there has been widespread speculation that he might appoint Lt. Gov. Tate Reeves or Secretary of State Delbert Hosemann, both Republicans. The special election will be same day as the regular election for the seat Wicker now holds.

The head of the Democratic Senatorial Campaign Committee, Sen. Chris Van Hollen of Maryland, said his party will have “good candidates” in both Senate races in Mississippi. Six Democrats, including two state lawmakers, qualified to run in the Wicker seat.

“This is a year where anything can happen,” Van Hollen said. “We’ve seen that.”

Democrat Mike Espy, President Bill Clinton’s first agriculture secretary, says he has a “strong intention” to run for the seat Cochran is leaving. In 1986 he became the first African-American in modern times to win a congressional seat in Mississippi.

Cochran’s departure set off a scramble within a state Republican Party already struggling to manage a disaffected conservative faction. Chris McDaniel, the outspoken, tea party-backed state senator who came close to defeating Cochran in a bitter 2014 Republican primary, qualified last week to challenge Wicker, but said he might jump to the special election if the Cochran seat is open. McDaniel said Monday it is “premature” to say what he will do.

Republicans in Washington are hoping to prevent a rough and costly primary season as they struggle to defend their 51-49 hold on the Senate. Some Republicans have doubts about McDaniel’s ability to win a general election. And after Republicans’ loss in Alabama, party leaders are eager to block any risky candidates.

In 2014, Cochran struggled to win a Republican primary over McDaniel, who received financial support from libertarian-leaning groups that criticized Cochran as a big spender. That race grabbed national attention after a McDaniel supporter entered a nursing home without permission and photographed Cochran’s wife, Rose, who was bedridden with dementia. Images of her appeared briefly online. McDaniel said he had no connection to the incident. Rose Cochran died in December 2014, and the senator married one of his longtime staff members, Kay Webber, in May 2015.