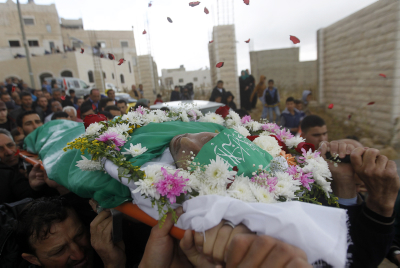 A law that gives police the power to decide if the bodies of dead terrorists should be returned to their families was approved by the Knesset Interior Committee for its second and third reading. The law would allow police to make that decision based on their estimation of whether or not the funeral of a terrorist would turn into an anti-Israel riot.

The law was presented by Likud MK Anat Berko, with the approval of Public Security Minister Gilad Erdan. “The law will allow local police officials to set the conditions for a funeral, and thus prevent disturbances, incitement, and encouragement of terrorism. In addition, the law will provide the necessary legal options for the decision on when and whether to return terrorists’ bodies to their families, as recent High Court decisions have demanded,” Berko said.

Police will be able to impose a long list of requirements on families seeking to hold funerals for terrorists, including limiting the number of participants, verifying the identity of participants, demanding that individuals be banned from participating, determining the route of a funeral as well as its time, limiting the items that those attending can bring, and in some cases even dictating where the funeral will take place.

The problem of incitement and rioting at terrorists’ funerals is an old one, and reached its height last summer, when the three murderers of Israeli police officers Ha’il Satawi and Kamil Shanan were given a loud, tumultuous funeral in Umm el-Faham in August, replete with Hamas and Palestinian flags, and anti-Israel slogans, graffiti, and speeches inciting Arabs to commit more acts of terror. Northern Islamic Movement head Raed Salah, one of the speakers at the funeral, was arrested on charges of incitement, and among the instances of incitement was a speech he gave at that funeral.

Erdan had attempted to hold onto the bodies of those terrorists. When he began serving as Public Security Minister he sought to get the Cabinet to vote on holding back terrorists’ bodies, but in the case of the Umm el-Faham terrorists, the High Court ordered the bodies released. Erdan then instructed police to impose restrictions on funerals, at least among Israeli Arabs who were holding funerals for terrorists, requiring them to hold quiet, low-profile funerals.

Knesset Interior Committee head MK Yoav Kisch said that “terrorists’ funerals are an occasion for incitement, and this is not acceptable. This is more than just a social media post – this is an event that foments mass hate, which leads to more terror attacks. We can prevent these things from happening by enabling police to determine how, when, and if a funeral will take place.”