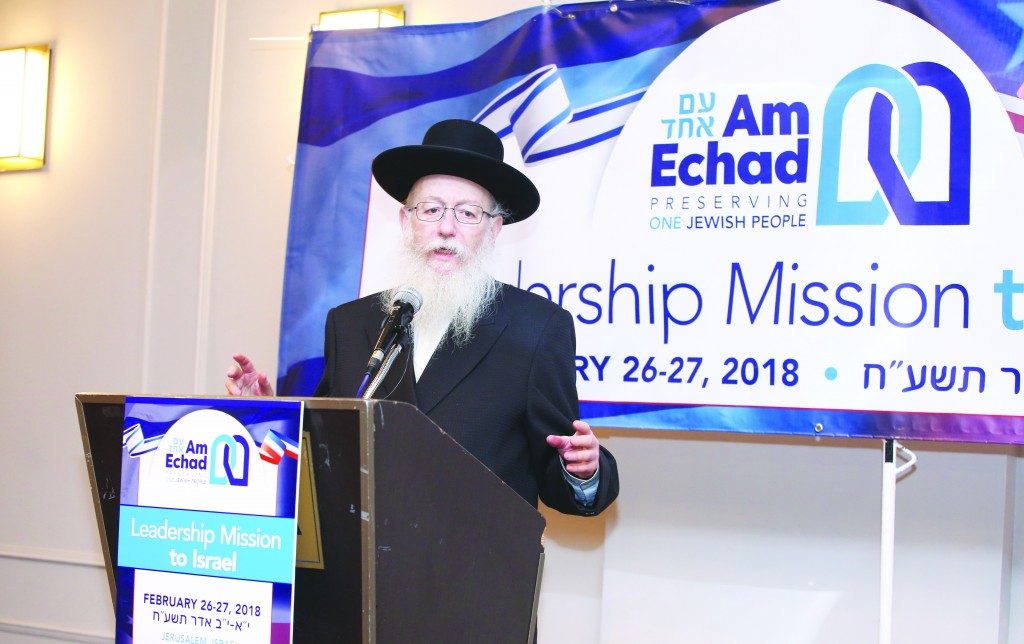 For far too long, when it came to crucial issues including the sanctity of the Kosel, the only American voices heard in the corridors of power within the Israeli government were those of the Reform and Conservative movements, while American Torah Jewry was nowhere to be found.

Last week, two decades after Rabbi Moshe Sherer, z”l, led, with great mesirus nefesh, a mission with an identical name, seeking to accomplish nearly the same goals, more than three dozen leading askanim who represent a broad spectrum of Torah Jews traveled to Eretz Yisrael on a historic Am Echad mission, with the specific goal of seeking a seat at the table.

The trip, organized by Agudath Israel of America and chaired by its Board of Trustees Chairman Shlomo Werdiger and Dr. Irving Lebovics, president of Agudath Israel of California, was by all accounts a very productive one.

“Our goal was to make it clear that if the Israeli government wants to hear from American Jewry, they need to hear from us as well. We represent an important constituency in America that cares and is deeply involved in Israel,” Dr. Lebovics told Hamodia upon his return.

He pointed out that it is uncertain precisely whom the leadership of the Reform and Conservative movements, who have placed unrelenting pressure on the Israeli government, really represent. According to all indications, the members of their own temples, who generally have excellent relations with Orthodox individuals they have gotten to know, have little interest in battling religious Jews some 6,000 miles away.

What is certain, however, is that they do not represent the rapidly growing community of observant Jews in the United States.

Mission participants were struck by the nearly unanimous reactions they encountered from the elected officials they met with. One by one, these Israeli officials expressed resentment at efforts by the Reform and Conservative movements to intervene in internal Israeli affairs when they themselves have only a tiny following within the country and face such enormous challenges at home. Between widespread intermarriage, assimilation and apathy, their own numbers are dwindling, and the average age of their members is older, not younger.

“Why are they trying to meddle in Israel, when they are in such trouble in the United States,” even the more secular ministers and Knesset members wanted to know.

Yet, at the same time, the influence and power of the well-connected Reform and Conservative leadership cannot and should not be underestimated. Which is precisely why such a trip was not only crucial, but long overdue.

It is imperative to recognize that — as was stressed by Dr. Lebovics and other participants — this trip must be viewed as a first step, albeit a vital one, in an ongoing, multi-faceted effort. Demanding a seat at the table is useless if we will fail to fill that seat through concrete action and continuing dialogue.

As was emphasized by the mission’s members, on a yearly basis, American Orthodox Jewry pours astronomical sums of money into the Israeli economy.

It is American Orthodox Jewry that regularly travels to Israel, for Yamim Tovim, for Lag BaOmer, and for occasions throughout the year. It is they who send their children — thousands of young men and women — to learn in Israeli yeshivos and seminaries, and in many cases go on to support their young couples who choose to spend their first years of marriage in Eretz Yisrael.

Yet the very fact that such a mission was so necessary is a sad indicator of a very troublesome reality.

There are a great number of reasons why the outrageous demands of the Reform and Conservative movements should not be taken seriously in the first place. For one thing, it is absurd for a movement that has openly rejected any belief in the coming of Moshiach and the rebuilding of the Beis Hamikdash to lay claim to the Kosel, a site that they rarely visit. It is the height of hypocrisy for a movement that opposes Jewish prayer on Har HaBayis — not because of any halachic considerations (a concept they have long ago discarded) but out of “deference to the rights and sensibilities” of Muslims — to take the exact opposite approach when it comes to respecting the feelings and traditions of Torah Jews who have been davening daily at the Kosel since the destruction of the Beis Hamikdash, whenever they had access to it.

However, as convincing as these and numerous other reasons may be, ultimately, as far as the Israeli government is concerned, what really matters is political calculations, international pressure, connections and influence.

That is why it is so urgent for American Torah Jews to have a seat at the table — and to make sure to fill that seat.