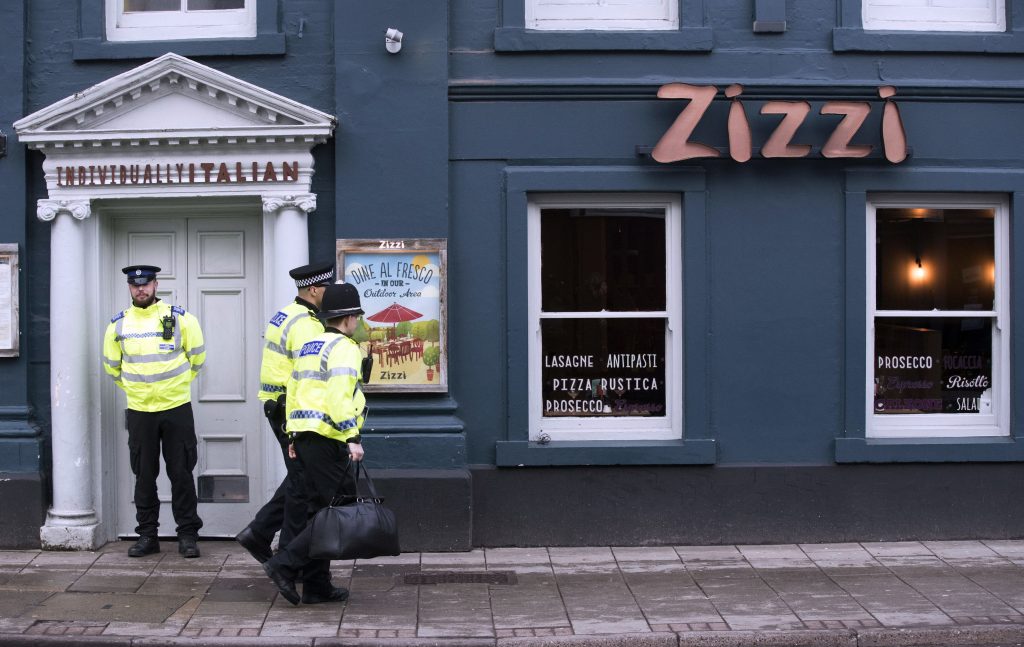 Britain will respond “appropriately and robustly” if Russia’s involvement is established in the case of an ex-Russian spy who became critically ill after coming into contact with an “unknown substance” in southern England, the U.K. foreign secretary said Tuesday.

Boris Johnson told lawmakers in the House of Commons that he wasn’t “pointing fingers” as to who might be responsible for the collapse of Sergei Skripal, who was found slumped on a bench together with his daughter Yulia on Sunday. But he stressed that if state involvement was proven, Britain would take action.

“I say to governments around the world that no attempt to take innocent life on U.K. soil will go either unsanctioned or unpunished,” he said.

Johnson said the crisis could affect British participation at the soccer World Cup in Russia this summer. He said that if Russian involvement is proved, “it will be very difficult to imagine that U.K. representation at that event will go ahead in the normal way.”

The Foreign Office clarified that the comment referred to dignitaries and officials, not the England team, which is scheduled to compete at the tournament.

British counterterror specialists took over the investigation from local authorities as they sought to unravel the mystery of why Skripal and his daughter collapsed in Salisbury, 90 miles (145 kilometers) southwest of London. Though authorities were trying to keep an open mind, the incident drew parallels to the death of former Russian agent Alexander Litvinenko, who was poisoned with radioactive polonium in 2006 in London.

“I think we have to remember that Russian exiles are not immortal. They do all die and there can be a tendency for some conspiracy theories,” Metropolitan Police assistant commissioner Mark Rowley told the BBC. “But likewise, we have to be alive to the fact of state threats as illustrated by the Litvinenko case.”

Skripal, 66, was convicted in Russia on charges of spying for Britain and sentenced in 2006 to 13 years in prison. He was freed in 2010 as part of a spy swap, which followed the exposure of a ring of Russian sleeper agents in the U.S.

The Kremlin said Russia hasn’t been approached by British authorities to help in the investigation. But Dimitry Peskov, President Vladimir Putin’s spokesman, said Tuesday at a daily conference call with media in Russia that “Moscow is always ready to cooperate.”

Both Skripal and his daughter are in critical condition in intensive care. A small number of emergency services personnel were assessed immediately after the incident, and police said Tuesday that all but one had been discharged.

The discovery led to a dramatic decontamination effort. Crews in billowing yellow moon suits worked into the night spraying down the street, and the Salisbury hospital’s emergency room was closed. A pub and a restaurant remain “secured,” but police didn’t say how long the cordons would be in place.

A security camera image of a man and woman walking through an alleyway connecting the Zizzi restaurant and the bench where Skripal and his daughter were found is believed to be of interest to police.

“Police had a good look at the footage and were interested in these two people. It was the only image they took away,” said Cain Prince, 28, the manager of a nearby gym. “They wanted a list of everyone in the gym between 3 p.m. and 4 p.m. as well.”

Public records list Skripal as having an address in Salisbury.

Skripal served with Russia’s military intelligence, often known by its Russian-language acronym GRU, and retired in 1999. He then worked at the Foreign Ministry until 2003 and later became involved in business.

After his 2004 arrest in Moscow, he confessed to having been recruited by British intelligence in 1995 and said he provided information about GRU agents in Europe, receiving more than $100,000 in return.

At the time of Skripal’s trial, the Russian media quoted the FSB domestic security agency as saying that the damage from his activities could be compared to harm inflicted by Oleg Penkovsky, a GRU colonel who spied for the U.S. and Britain. Penkovsky was executed in 1963.

The circumstances surrounding Sunday’s incident were still murky, and police urged the public not to speculate. But few could avoid invoking the name of Litvinenko — the former Russian agent who died after drinking polonium-210-laced tea in a swanky London hotel in 2006.

His illness was initially treated as unexplained. Evidence eventually emerged indicating he had been deliberately poisoned with the radioactive material.

A British judge wrote in a 2016 report that Litvinenko’s death was an assassination carried out by Russia’s security services — with the likely approval of Putin. The Russian government has denied any responsibility.

Despite the swirling discussions, little is clear. Mark Galeotti, the head of the Center for European Security at the Institute of International Relations in Prague, urged caution, noting that it wasn’t yet clear what happened. He pointed out that in the past, Russia hasn’t tried to eliminate swapped spies “as this would spoil their chances of getting future exchanges” with the West.

“The mythology that Moscow always gets back at those who betray them is just that, a mythology — not every exiled spy or Kremlin enemy has been killed,” he said. “It is more likely that Skripal was still a spy or he was working for a private intelligence firm or they (Kremlin) thought he was.”