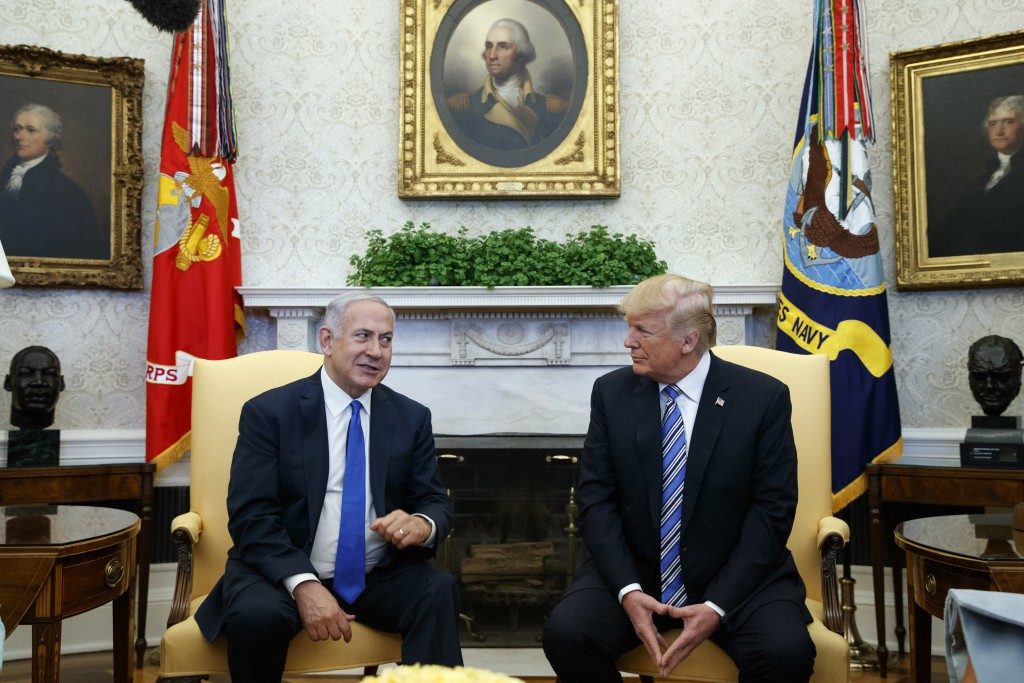 He stood this week in the reception room at the White House and examined the figures that have stood there silently for so many years. Paintings of former United States presidents hang on the wall.

He passed easily from one to the next: “This is Abraham Lincoln, this is Benjamin Franklin, this is George Washington.”

Binyamin Netanyahu feels at home there. It is not his first visit, and he hopes it will not be the last.

Then, a moment before entering his meeting with President Donald Trump, he pointed to a small statue standing shamefacedly to one side: “This is a genius whom I particularly like,” said PM Netanyahu to the cameras. “He didn’t get to be president; this is the first Secretary of the Treasury of the U.S.A., Alexander Hamilton. He built the American economy, he built the foundations of the American government, and the great disaster was that he died in a stupid duel.”

It was after the 1804 elections for the position of governor of New York state, elections that were — literally — bloody, in which Hamilton’s candidate beat Vice President Aaron Burr. After an exchange of insults, the two arranged to meet for a duel in New Jersey. The Secretary of the Treasury was beaten and died the next day. A stupid and unnecessary death.

But what Netanyahu chose not to speak about in front of the cameras is the war that he is now fighting to prove his innocence. He who brought the achievements of the American economy to Israel, he who sees Hamilton as a role model and a source of inspiration, now finds himself in a comparable duel with a hostile media, a state prosecution and police force that despise him and a judicial system that loathes him.

Netanyahu is an excellent economist, and the policies of the American treasury are interwoven in his speeches. One of the models he brought to Israel is “the fat man and the thin man.” This is an economic outlook according to which a thin man who weighs 100 pounds carries on his back a heavier man, who weighs 120 pounds. The fat man is the public sector, which has expanded to 55 percent of the economy, and the thin man is the private, productive sector that is supposed to carry the public sector on its back.

PM Netanyahu’s plan was to deal with the ratio of the weight between the fat man and the thin man: to put the fat man on a strict diet and at the same time to strengthen the thin man — the business sector, by reducing taxes, and so on.

In 2003, when he was Minister of Finance, he introduced stringent cuts, and the chareidim with large families were the first to feel the strict diet; nevertheless, there is no one today who does not admit that Netanyahu was responsible for the recovery of Israel’s economy, and brought welcome results.

But that is not what Netanyahu dreamed of when he wanted to enjoy the delights of power. He did not imagine for a moment that he would be suspected of criminality or corruption — he who arrived with a brilliant record spangled with American stars, and whom the people saw as the right man. Too many incidents have been connected to his name recently, and the feeling is that attempts are being made to close in on him from all directions.

Perhaps his opponents feel betrayed by the man who dared to win an election against Shimon Peres after Yitzhak Rabin’s murder, or perhaps it is simply the long time this man has been in office, or perhaps it is that, in contrast to his predecessors, he has a poor relationship with the media.

Maybe, just maybe, the sin of hubris has affected him; he has become arrogant after years of rule and, unnoticed, a small present from here or a large benefit from there have made their way into the house on Balfour Street. Maybe it is not as great a misdemeanor as it is presented to be but morality has been corrupted.

Today, PM Netanyahu is fighting the duel of his life, and it is uncertain if he will survive it. On the one hand, the people elect him time after time, and on the other hand, there are other ways of removing him. It seems that Hamilton was not entirely correct: He said at the Poughkeepsie Convention of 1788: “Here, sir, the people govern.”‏

In Israel, the people do not govern. Maybe the state prosecution.