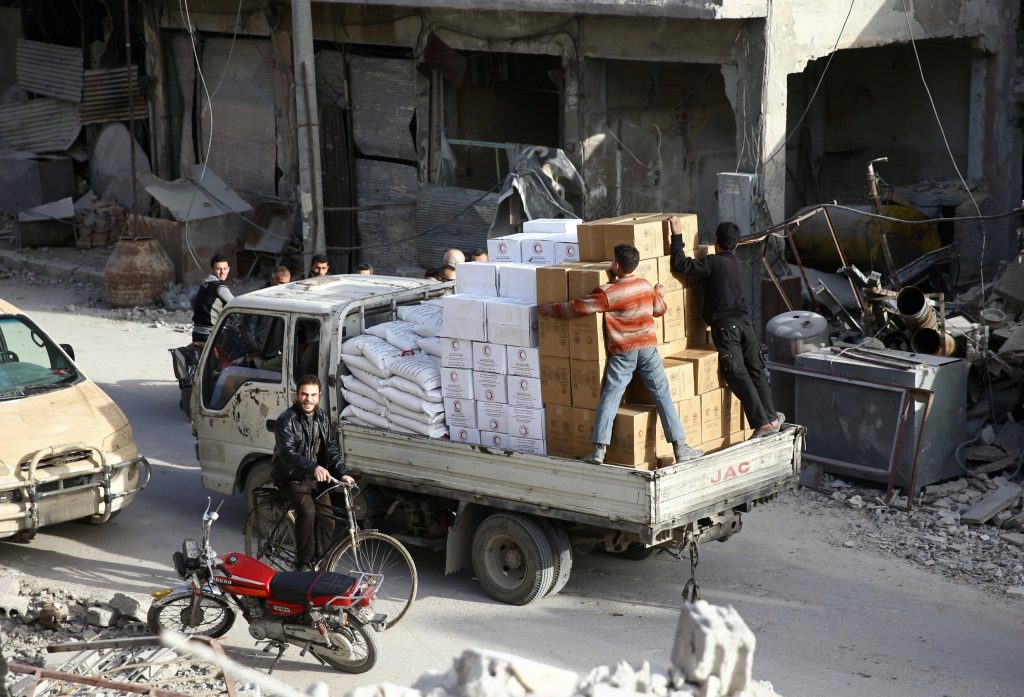 A U.N. convoy carrying desperately needed food and medicine to besieged civilians entered the war-ravaged eastern suburbs of Damascus on Monday, but aid agencies said Syrian authorities blocked the delivery of some of the health supplies, including trauma and surgical kits and insulin.

The shipment was the first to enter eastern Ghouta since Russia instituted what it called daily “humanitarian pauses” in the fighting a week ago. It also was the first time in weeks that any aid has been allowed in amid a crippling siege and a government assault that has killed hundreds of people in the past month.

Despite the truce, at least 50 civilians were killed Monday in airstrikes and shelling, according to the Britain-based Syrian Observatory for Human Rights monitoring group. The activist-run Ghouta Media Center said 24 people were killed in Hammouriyeh and another 10 in Harasta, both towns in eastern Ghouta.

The U.N.’s humanitarian office said the 46-truck convoy of health and nutrition supplies, along with food for 27,500 people, entered Douma — the largest town in eastern Ghouta — around midday.

But it said the Syrian government did not allow 70 percent of the health supplies to be loaded and would not allow them to be replaced by other items.

The World Health Organization said that during an obligatory routine inspection by Syrian national authorities, many of the supplies in the WHO shipment were rejected, including all trauma, surgical, dialysis and insulin supplies.

Marwa Awad, a spokeswoman for the World Food Program in Damascus who accompanied the convoy, also said many of the life-saving health supplies were not allowed to be loaded.

“Consequently, three of the 46 trucks being sent to Douma today are close to empty,” she told The Associated Press. “We hope to be able to take them inside on the next convoy Thursday.”

The government routinely removes lifesaving medical supplies from aid convoys, in a pattern of denying such aid to civilians living in opposition areas. U.N. officials have complained for years about such actions by the Syrian government.

Many civilians in Douma are desperate for food and medicine, and had hoped for relief as the convoy began entering the area, one of the last rebel strongholds near the capital.

Eastern Ghouta, home to about 400,000 people, has been under a crippling siege and daily bombardment for months. More than 700 civilians have been killed in the last two weeks alone.

Douma-based media activist Ahmad Khansour said there is “tremendous reproach” against the U.N. and the international community in eastern Ghouta.

“It’s not possible that the (Syrian) regime is allowed to besiege a city for six years, and then we wait for them to approve an aid delivery,” he said.

Khansour said the aid covers 7 percent of the people in need.

“Can you imagine such a number? It means if we divide it evenly, each family gets two kilograms (about 4.5 pounds). It’s enough for one day. It’s unbelievable how shameful this is of the U.N.,” he added.

The U.N.’s Resident and Humanitarian Coordinator in Syria, Ali al-Za’tari, said the aid was delivered to civilian groups and local councils, in coordination with the Syrian Arab Red Crescent. Military groups did not receive any supplies, he said.

The only other U.N. aid delivery to eastern Ghouta this year was on Feb. 14, when a convoy of supplies for 7,200 people reached Nashabiyah, a smaller town.

The daily humanitarian pauses would continue, allowing any civilians wanting to leave the region to do so, Assad said.

“There is no contradiction between the truce and the military operation,” Assad said in comments broadcast on Syrian TV.

The daily pause was ordered last week by Russia, a key Assad ally. It has been implemented with daily violations for the past week, and no civilians have left the encircled region.

Russia has accused rebel groups of preventing civilians from leaving, while residents say they fear permanent displacement or retribution by Syrian authorities.

The Assad government, meanwhile, said it achieved “significant” progress in its ongoing military operation in eastern Ghouta, seizing about 36 percent of the total area held by different armed groups.

Syria’s Central Military Media said troops continued advancing from the east and were only 3 kilometers (1.8 miles) from meeting up with troops coming from the west, which would cut eastern Ghouta into two parts.

Monday’s announcement came a day after troops recaptured Nashabiyah and a number of villages and farms in eastern Ghouta in the largest advances since the government’s wide-scale operation began last month. Besides the 50 reported civilian deaths, there also has been a wave of internal displacement of people fleeing the front lines.

In Geneva, the U.N.’s top human rights body called for investigators to conduct an urgent and targeted probe of the violence in eastern Ghouta.

The Human Rights Council adopted a resolution proposed by Britain instructing its Commission of Inquiry on Syria, created 6 1/2 years ago, to conduct a “comprehensive and independent inquiry” and report back in June.

The measure also threw the council’s support behind the U.N. cease-fire across Syria to allow humanitarian aid in and to evacuate the sick and wounded.