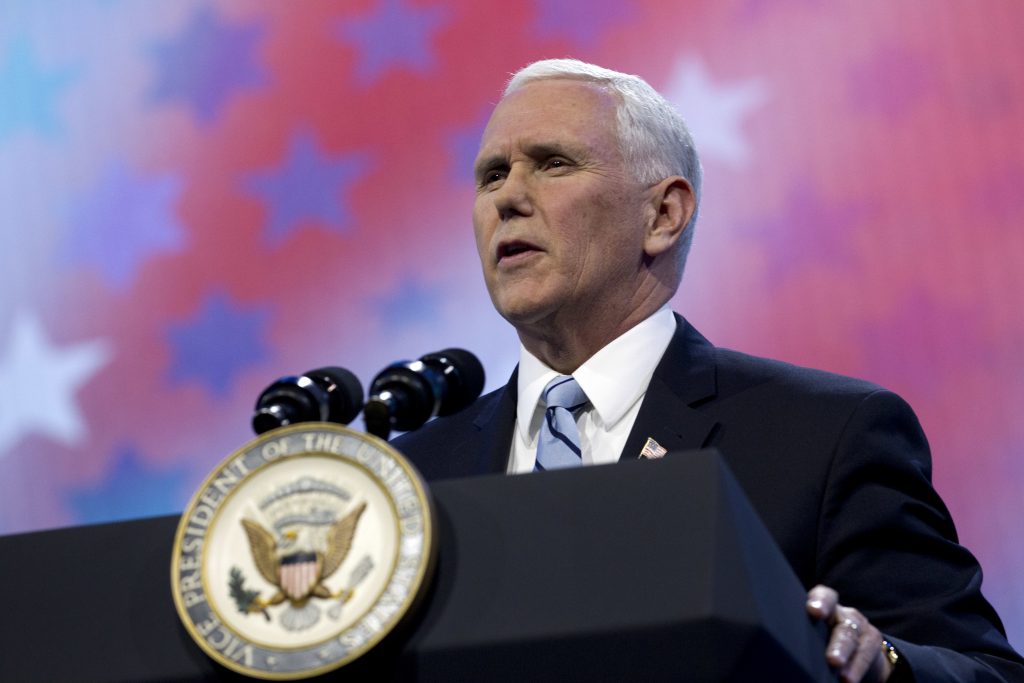 Support from Israel in the highest echelons of the U.S. government was on display Monday night, as administration officials took to the AIPAC stage to declare unwavering support for the Jewish state.

Vice President Mike Pence extended greetings from President Trump, whom he called “the most pro-Israel president in American history,” to loud applause from the crowd numbering 18,000 at the Walter E. Washington Convention Center.

Vice-President Pence discussed the pro-Israel comments and stances that President Trump – who met with Israeli Prime Minister Binyamin Netanyahu at the White House earlier Monday — has made and taken during his first year in office, whether fighting terror worldwide, “stand[ing] up to the leading state sponsor of terror” by “no longer certify[ing] the disastrous Iran nuclear deal,” and by “stand[ing] up for the State of Israel and against anti-Semitism on the world stage.” Mr. Pence also extolled the work of Mr. Trump’s U.N. Ambassador, Nikki Haley, and, regarding the hottest issue related to Israel, said, “While every president, for the past two decades, promised to recognize the capital of Israel, President Trump did more than promise: He delivered.”

“As the president said, ‘We finally acknowledged the obvious.’ ”

Just as President Harry Truman made history by recognizing the State of Israel, said Pence, “President Trump will make history again when thanks to the strong efforts of Ambassador [David] Friedman, in May of this year, we will open the American Embassy in Jerusalem.”

By committing to move the embassy, said Pence, “the United States has chosen fact over fiction – and fact is the only true foundation for a just and lasting peace.”

Mr. Pence insisted that the Trump administration “remains fully committed to achieve a lasting peace between Israelis and Palestinians,” and noted that the president has said that he would accept a two-state solution if that were the outcome of Israeli-Palestinian peace negotiations.

Mr. Pence said that Mr. Friedman and presidential advisors Jared Kushner and Jason Greenblatt, “are hard at work crafting our administration’s vision for peace. And while any peace will undoubtedly require compromise, know this: The United States of America will never compromise the safety and security of the Jewish State of Israel.”

Turning to the issue of perhaps Israel’s — and Sunni Islam’s — gravest existential threat, Iran, which has led Israel to seek closer alliances with Sunni Arab states, “The winds of change are blowing across the Middle East,” said the vice president.

“Longstanding enemies are becoming partners, old foes are finding new ground for cooperation and the descendants of Isaac and Ishmael are coming together in common cause to meet, as the president said, history’s great test, and conquer extremism and vanquish the forces of terrorism. And we will meet that task togethe.

“Radical Islamic terrorism knows no borders, targeting America, Israel, nations across the Middle East and the wider world. It respects no creed, stealing the lives of Jews, Christians and, especially, Muslims. And radical Islamic terrorism understands no reality other than brute force. And together with our allies, we’ll continue to bring the full force of our might to confront and defeat this enemy in our time.”

Mr. Pence also warned that “as the enemy retreats … we must be vigilant to prevent others from taking its place.”

“We will not allow the defeat of ISIS to become a victory for Iran,” said the vice president, a country that “hopes to recreate the ancient Persian Empire under the modern dictatorship of the Ayatollahs.”

While President Trump has waived sanctions against Iran earlier this year, “to give our lawmakers and our allies time to act,” said Mr. Pence, “make no mistake about it: This is their last chance.

In her own remarks, Ambassador Haley, an outspoken friend of Israel at the hostile United Nations, recalled her meeting with President Trump after his electoral victory in 2016.

Mrs. Haley said that she believes that Mr. Trump decided to nominate her for the position when she told him, “You know I won’t be a wallflower or a talking head. I have to be able to say what I think.”

“Without any hesitation,” said Mrs. Haley, the President-elect said, “Nikki that’s exactly why I want you to do this.”

“President Trump has been true to his words, and I think I have too,” said the ambassador, as the crowd gave her one of the many extended, thunderous, standing ovations she’d receive during her speech.

Mrs. Haley, who grew up in the only Indian-American family in her small South Carolina community, said that at times she and her family suffered from bullying, and that one of the principles she took with her to the U.N. was that “I have absolutely no patience for bullying.”

“At the U.N. and throughout the U.N. agencies, Israel [gets] bullied,” said Mrs. Haley. “It gets bullied because the countries that don’t like Israel are used to being able to get away with it. Well, just like when I was that little girl in South Carolina, that just doesn’t sit well with me.”

Every month at the U.N. Security Council, there is a session devoted to Middle Eastern issues. Ambassador Haley was appalled to discover that sessions were almost entirely devoted to Israel-bashing.

“There are probably 10 major problems facing the Middle East,” from a deadly civil war in Syria to Hamas, Islamic State, and the famine in Yemen,  “and Israel doesn’t have anything to do with any of them,” said the Ambassador.

“Just about every month since then in the Middle East session, I have spoken about something other than Israel. I can’t say that we’ve solved the problem, but I can say that several other countries have followed our lead. What used to be a monthly Israel-bashing session, now at least has more balance, but we’re never going to put up with bullying.”

When the Trump administration is accused of favoritism toward Israel, Mrs. Haley pleads guilty as charged.

“There’s nothing wrong with showing favoritism toward an ally. That’s what being an ally is all about!

“But this is really not about favoritism. In all that we’re doing, whether it’s the embassy decision or UNESCO, or what we’re doing with UNRWA – don’t even get me started on that one – our approach on Israel is tied together by one major idea. The idea that runs through all of it is the simple concept that Israel must be treated like any other normal country.

“And you know what? That demand is actually a demand for peace. The U.N.’s bias against Israel has long undermined peace by encouraging an illusion that Israel will just simply go away. Israel’s not going away. When the world recognizes that, then peace becomes possible.

“It becomes possible because all sides will be dealing with realities, not fantasies, and when we deal with realities, then reasonable negotiated compromises can prevail over absolutist demands.