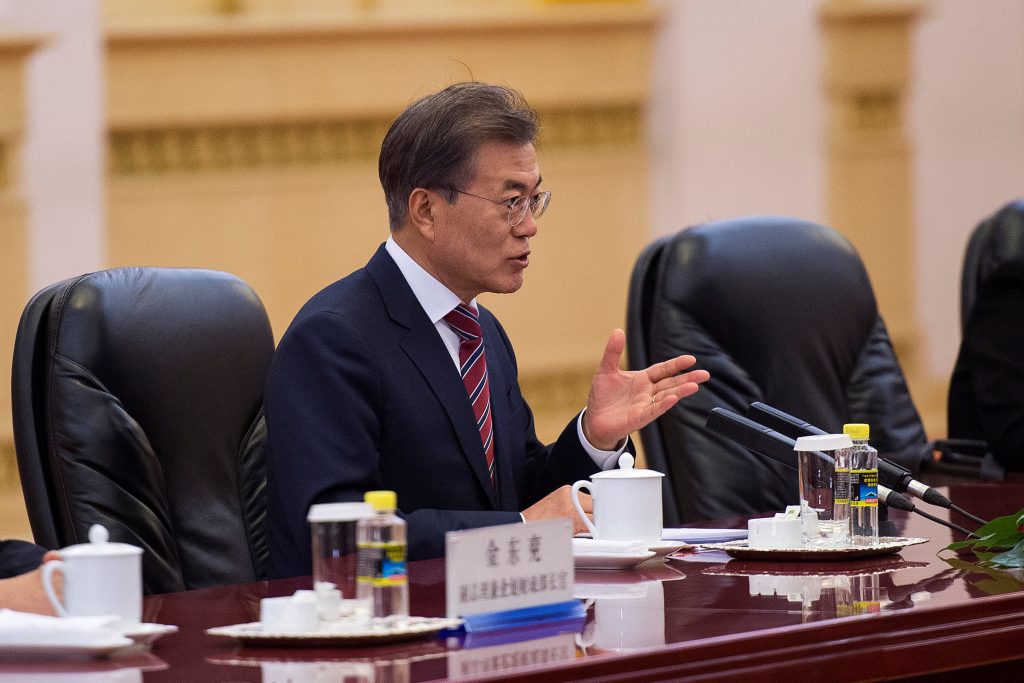 South Korea will dispatch a delegation led by senior security officials for a two-day visit to North Korea starting Monday, the presidential Blue House announced Sunday, as President Donald Trump hinted that he is ready to talk to Pyongyang.

For its part, North Korea said it was not begging to talk with Washington and denounced upcoming U.S.-South Korean joint military exercises, warning that it would take countermeasures against the United States if they went ahead.

The drills will take place next month, a South Korean presidential security adviser said, according to the Yonhap news agency. They had been delayed until after the Winter Olympics in South Korea.

South Korea’s presidential Blue House said in a statement that National Security Office (NSO) head Chung Eui-yong and National Intelligence Service (NIS) chief Suh Hoon, a veteran of past negotiations with the North, will be among the 10-member South Korean delegation visiting Pyongyang.

The visit was part of an effort to lower tensions on the Korean peninsula as well as possibly arrange talks between North Korea and the United States, it said.

After the visit to North Korea the envoys will travel to the United States to brief officials, and Seoul said it would also coordinate closely with officials in Japan and China.

During a joke-filled monologue at a dinner with journalists in Washington on Saturday, Trump suggested that the United States will be meeting with North Korea but has told Pyongyang it must first “denuke.”

“We will be meeting and we’ll see if anything positive happens,” he added.

It was unclear if Trump was joking or if formal U.S.-North Korea talks were imminent.

Last month, U.S. Vice President Mike Pence was scheduled to meet with North Korean officials, including leader Kim Jong Un’s sister, while in South Korea for the Olympics but the North Koreans canceled at the last minute, U.S. officials said in February.

North Korea reiterated on Saturday that it was willing to talk to the United States but said it would never sit with any precondition.

A North Korean Foreign Ministry spokesman was quoted by KCNA as saying “we will neither beg for dialogue nor evade the military option claimed by the U.S.”

The Winter Olympics in Pyeongchang last month gave a boost to the recent engagement between the two Koreas after more than a year of sharply rising tensions over the North’s missile program and its sixth and largest nuclear test in defiance of United Nations sanctions.

During a phone call on Thursday, Moon told Trump of his plan to send a special envoy to North Korea in response to an invitation from leader Kim Jong Un.

In sending an envoy to Pyongyang, Moon said he would be seeking to reciprocate Kim Jong Un’s decision to send a senior delegation, including his sister, Kim Yo Jong, to the Olympics, marking the first visit by a member of the North’s ruling bloodline since the 1950-53 Korean War.

The White House has said any talks with North Korea must lead to an end of its nuclear program, and on Feb. 23, the United States said it was imposing its largest package of sanctions to pressure North Korea to give up its nuclear and missile programs.

At the time, Trump also warned of a “phase two” that could be “very, very unfortunate for the world” if the steps did not work.