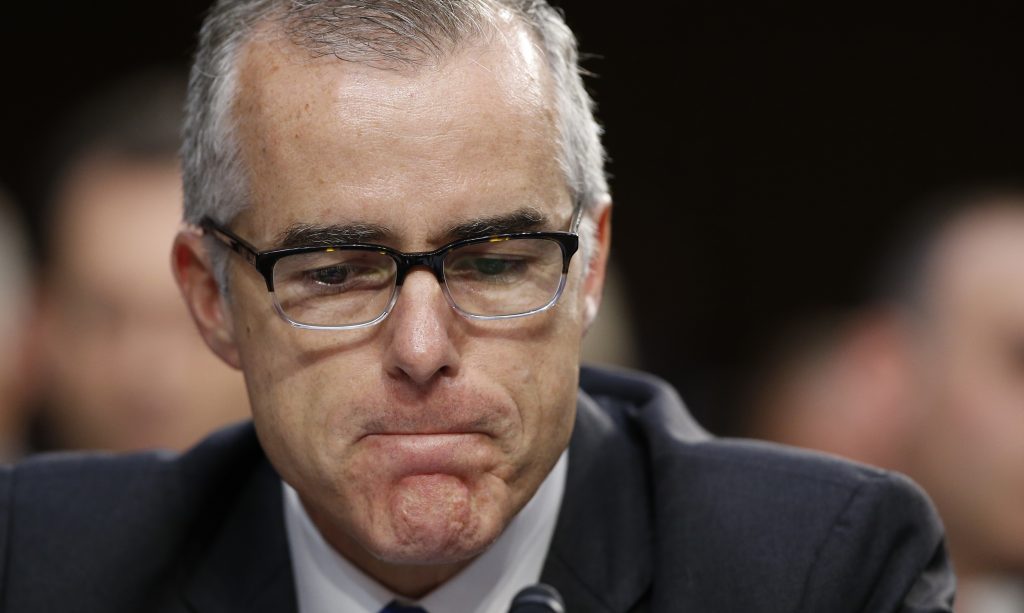 The Justice Department inspector general is preparing a damaging report on former FBI deputy director Andrew McCabe, alleging he was responsible for approving an improper media disclosure, two people familiar with the matter said. One of the people said McCabe will also be accused of misleading investigators about his actions.

The report is a part of Inspector General Michael Horowitz’s broad review of the FBI and Justice Department’s handling of the investigation into Hillary Clinton’s use of a private email server while she was secretary of state.

During that work, inspector general’s investigators found that McCabe had authorized the disclosure of information to the Wall Street Journal for an October 2016 story that examined feuding inside the FBI and Justice Department around the handling of a separate investigation into Clinton’s family foundation, two people familiar with the case said.

Those probing the matter believe that McCabe, who stepped down in January, misled them when they initially inquired about the subject, though one person familiar with the forthcoming report said McCabe disputes that he intentionally misled investigators.

It is unclear how McCabe is said to have misled investigators. The inspector general’s findings on the media disclosure were first reported by the New York Times.

Horowitz’s report is almost certain to be used by President Donald Trump, who has railed against leaks and made McCabe a particular target of his ire in recent months. McCabe, 49, briefly served as acting FBI director after President Trump fired James Comey from the job, and much like the man he succeeded, McCabe soon became a lightning rod in the political battles over the FBI, Clinton and special counsel Robert Mueller III’s investigation into whether the Trump campaign coordinated with Russia to influence the 2016 election.

The 2016 Wall Street Journal report came just as the FBI had reopened the Clinton email investigation on the eve of the presidential election, a matter that was separate from the Clinton Foundation case but had parallels in the way it was fraught with politics.

The Journal’s story was notable for the level of detail it contained about internal law enforcement debates, and its revelation of specific information about an ongoing criminal case was considered by the inspector general to be particularly problematic. It presents McCabe as a complicated figure, one who at times is seen by those lower in the bureau as standing in the way of the Clinton Foundation investigation, though he also seems to stand up to Justice Department leaders.

The Journal reported that McCabe retorted to a Justice Department official, upset to learn of steps the FBI had taken in the Clinton Foundation investigation, “Are you telling me that I need to shut down a validly predicated investigation?” That would contradict any attempt by Mr. Trump or the GOP to claim that he was favoring the Democratic presidential candidate.

The Journal’s story was written by Devlin Barrett, now a reporter at The Washington Post. Spokesmen for the Journal did not return an email message. Recently released text messages from an FBI agent and FBI lawyer involved in the Clinton email case show that two days before the story was published, the lawyer, Lisa Page, and the FBI’s top spokesman, Michael Kortan, were on the phone with Barrett for an extended conversation.

Page worked in the FBI general counsel’s office and with McCabe, and she was briefly detailed to Mueller’s investigation into whether the Trump campaign coordinated with Russia to influence the 2016 election. Neither an FBI spokeswoman nor Page’s lawyer returned messages Thursday night.

Kortan, who has since left the FBI, could not immediately be reached for comment.

Background briefings with high-level government officials are common in Washington, particularly when reporters already have information and agencies hope to fill in the gaps on limited, and potentially misleading, facts. But law enforcement officials are generally instructed not to reveal ongoing criminal investigations.

While the inspector general uncovered allegations specific to McCabe during his broader look at the Clinton email case, his report on the FBI official is not likely to be the only one the work produces. Horowitz is also examining broad allegations of misconduct involving Comey, the public statement he made recommending that the case be closed without charges, and his decision on the eve of the election to reveal to Congress that the FBI had resumed its work.

Horowitz has said publicly he is going to release that report in March or April.

Late last month, Comey defended the man he picked to be his top deputy, writing on Twitter that McCabe, “stood tall over the last eight months, when small people were trying to tear down an institution we all depend on. He served with distinction for two decades.”

In May, after Comey’s firing, Mr. Trump asked McCabe in an Oval Office meeting whom he had voted for in the 2016 election, and vented over donations McCabe’s wife, who ran as a Democrat for a seat in the Virginia legislature, had received from the political action committee of Terry McAuliffe.

McAuliffe, then the governor of Virginia, is an ally of Clinton, and McCabe, after his wife’s loss in the race, would go on to supervise the probe into Clinton’s use of a private email server.

In the months that followed that conversation, Mr. Trump repeatedly took aim at McCabe in private and on Twitter, asking why his attorney general had not removed him from his post and remarking in December that the then-No. 2 official was “racing the clock to retire with full benefits.”

McCabe had long planned to retire March 18, when he became eligible to receive his benefits, but in late January, he surprised the bureau when he abruptly stepped down. The move came after a private meeting in which FBI Director Christopher A. Wray expressed concern to McCabe about what the inspector general had found.

“My conviction to adhering to process is similarly matched by my conviction to holding people accountable,” Wray wrote later in a message to staff that thanked McCabe for his “years of dedicated, selfless and brave service to the FBI and the American people.”

McCabe is still expected to formally retire in March. It was not immediately clear whether the inspector general’s report would affect that.