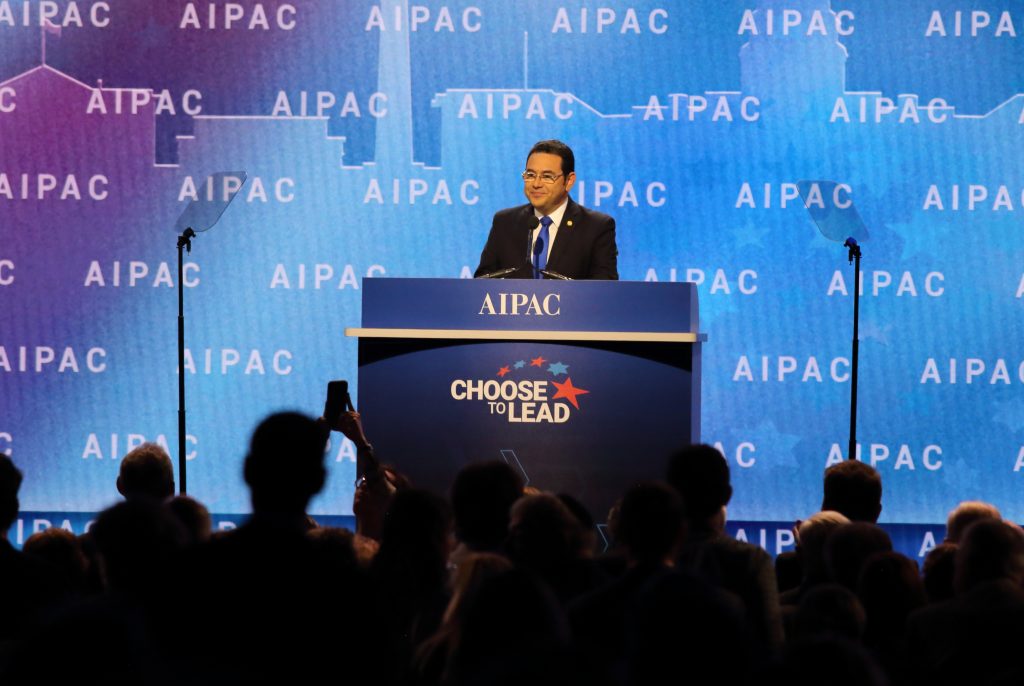 Morales said that his country shares many values with the United States and Israel, including the “fight against terrorism, commitment to broader security, prevention of irregular immigration, the fight against drug and weapon trafficking, and protection of human rights. This is why we stand together and support each other.”

“In May of this year, we will celebrate Israel’s 70th anniversary, and two days after the United States, Guatemala will return and permanently move our embassy to Jerusalem,” announced Morales.

“And we are sure that many other countries will follow in our steps.”

The other featured speaker of Sunday evening’s session was Avi Gabbay, head of Israel’s Labor Party.

Gabbay, who was introduced to a smattering of boos in addition to cheers, quickly received loud applause as he thanked President Trump “for recognizing Jerusalem as our eternal capital.”

Gabbay, who made a joke about term limits as he took the stage and later openly mentioned his hope to succeed Likud Prime Minister Binyamin Netanyahu, spoke forcefully of the need for Israel to defend herself, in words that could have been lifted straight from the hawkish Netanyahu.

In a nod to the latest techno-warfare, Gabbay said that the Israeli military must not only be the most powerful, in air and in sea, but also “online.”

“We must stop building caravans on hilltops and glorifying remote settlements because they do not provide any security value to Israel,” said the Labor leader, to very sparse applause.

“Jewish communities around the world are brothers and sisters — ultra-Orthodox and orthodox, Reform or Conservative, affiliated or unaffiliated, you are all our brothers and sisters,” said Gabbay. And then, wading into controversial waters, he declared, “And the Kotel belongs to all of us equally.”

Gabbay spoke of the importance of Israel’s security alliance with the United States, and emphasized that this alliance historically has been on both sides of the American political aisle.

The alliance has been “led by shared values, led by a compassion and concern for Israel in every White House since 1948, led by the incredible bipartisan voice in Congress,” said Gabbay. “We must keep the support for Israel bipartisan.”