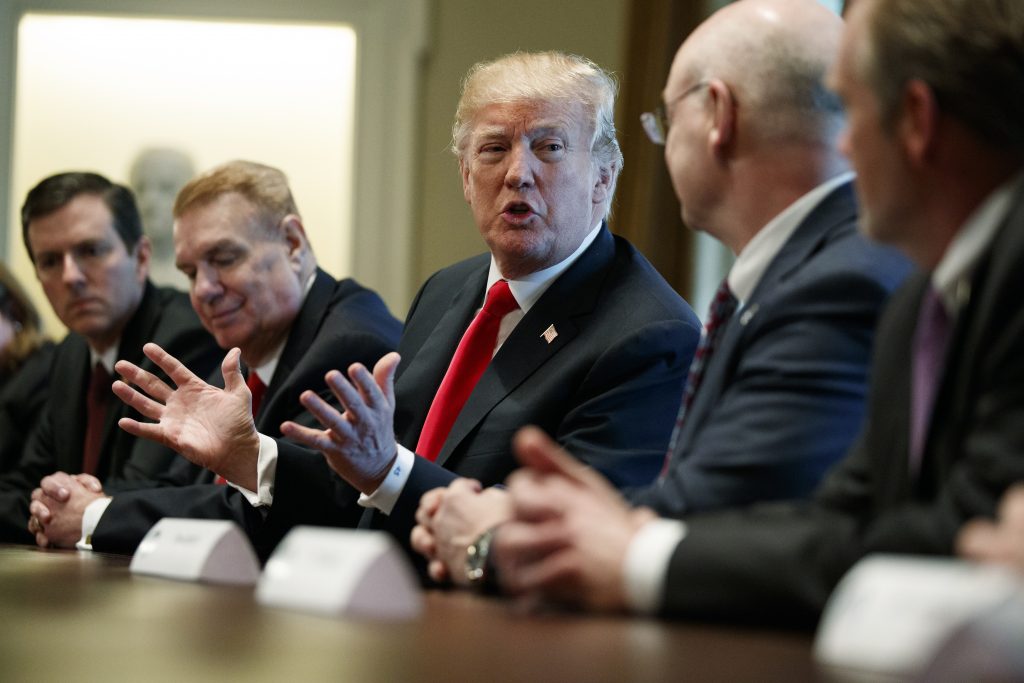 Republicans in Congress have learned to ignore President Donald Trump’s policy whims, knowing whatever he says one day on guns, immigration or other complicated issues could very well change by the next.

But Trump’s decision to seek steep tariffs on steel and aluminum imports has provoked rarely seen urgency among Republicans, now scrambling to convince the president that he would spark a trade war that could stall the economy’s recent gains if he doesn’t reverse course.

The issue pits Trump’s populist promises to his voters against the party’s free trade orthodoxy and the interests of business leaders. Unlike recent immigration and gun policy changes that require legislation, Trump can alter trade policy by executive action. That intensifies the pressure on Republican lawmakers to change his mind before he gives his final approval for the penalties as early as this coming week.

Trump on Saturday showed no sign of backing away, threatening on Twitter to impose a tax on cars made in Europe if the European Union responds to the tariffs by taxing American goods. He also railed about “very stupid” trade deals by earlier administrations and said other countries “laugh at what fools our leaders have been. No more!”

House Speaker Paul Ryan, R-Wis., called Trump after the president’s surprise announcement, and continues to hope the White House will reconsider the decision. Sen. Ben Sasse, R-Neb., and others have offered the president their own private counsel. Some are appealing to his desire for a robust stock market and warning that the trade penalties could unravel some of the gains they attribute to the tax bill he signed last year.

Rep. Kevin Brady, R-Texas, chairman of the tax-writing House Ways and Means Committee, tried one of the most direct lines that lawmakers have to the White House: talking to Trump through cable TV news.

“The president has not yet issued these tariffs,” Brady told Fox News on Thursday, hours after Trump announced the tariff targets. “He’s been continuing to listen.”

Listening to various viewpoints, though, has never been the gripe against Trump.

Unlike President Barack Obama, who often irked lawmakers for lecturing them during meetings, Trump retains a level of popularity among Capitol Hill Republicans in part because he’s more than happy to invite lawmakers in and hear them out.

But problems have arisen when members of the legislative branch leave the White House under the impression Trump was on their side — or at least willing to consider their views — only to find out later that his support drifted away.

True to form, Trump’s flirtations with gun control showed signs of subsiding by week’s end. A day after his meeting with lawmakers, the president tweeted that he had a “Good (Great!) meeting” in the Oval Office with the National Rifle Association. The gun lobby’s executive director also tweeted afterward that Trump and Vice President Mike Pence “don’t want gun control.”

It’s unclear what gun control measures, if any, Trump may endorse. But his back-and-forth on the matter was reminiscent of his waffling on immigration this year.

Earlier this year, with a government shutdown looming, Trump welcomed lawmakers for a meeting at the White House to discuss immigration law changes. During the session, he told them he would take the political “heat” and sign into law whatever Congress could agree to pass.

Two days later, Sens. Lindsey Graham, R-S.C., and Dick Durbin, D-Ill., dashed to the White House to present their bipartisan agreement. But the session ended in heated exchanges after Trump rejected the bill and used crude language to question why the U.S. would want to welcome immigrants from Africa and some other nations.

“Let’s talk about two Trumps – the Tuesday Trump and the Thursday Trump,” Graham said later during a Senate Judiciary Committee hearing. “Tuesday we had a president that I was proud to golf with, call my friend.”

“I don’t know where that guy went. I want him back,” Graham said.

Republicans, who hold a majority in the House and Senate, have largely learned to take these setbacks in stride. They all but shrug off the president’s policy pivots, just as Ryan and Senate Majority Leader Mitch McConnell, R-Ky., often decline to comment on the Trump tweet of the day.

But on trade tariffs, Republicans say the stakes are too high for them to sit back and wait for Trump to change his mind. Indeed, their relentless public condemnation of the tariffs was notably sharper than their typical handling of the president’s policy whims.

Trump, after the White House’s own internal deliberations, proposed a 25 percent tariff on imported steel and 10 percent on aluminum. That quickly sparked global warnings of retaliation and left the financial markets reeling.

Republican lawmakers, and some outside groups, want Trump to at least consider a more targeted approach, or exemptions for countries that engage in what they view as fair trade practices.

“We’re all urging the president, look, continue to narrow this to these unfairly targeted products,” Brady said.