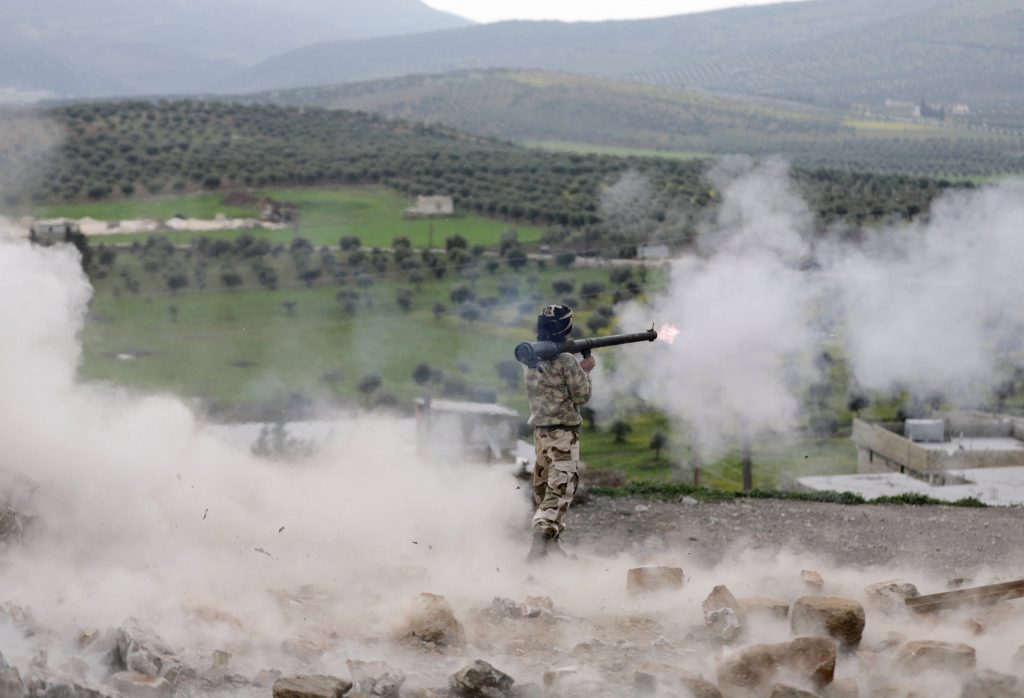 Syrian government forces gained more ground in an assault on eastern Ghouta near Damascus on Saturday as they seek to defeat the last major rebel enclave near the capital, a war monitor and a news service run by Lebanon’s Hezbollah said.

On another front in the multi-sided war, Turkey said it had captured a Kurdish town in the northwestern Afrin region where it has been fighting the Kurdish YPG militia since January, helped by allied Syrian fighters.

The Syrian war, which has killed hundreds of thousands of people since 2011, has escalated on several fronts this year as the collapse of the Islamic State terror group has given way to other conflicts between Syrian and international parties.

The U.N. Security Council demanded a 30-day countrywide ceasefire a week ago, but this has failed to take effect.

Damascus, backed by Russia and Iran, has been waging one of the deadliest offensives of the war in eastern Ghouta, killing hundreds of people in a fierce air and artillery bombardment over the last two weeks.

Ground forces including the army’s elite Tiger Force have been attacking from the eastern edge of the besieged enclave, where the United Nations says 400,000 people live.

The Observatory said they had taken almost complete control of the town of al-Shayfouniya on Saturday.

The Jaish al-Islam rebel group said in a statement its members had withdrawn from positions in two areas, one of them in al-Shayfouniya, due to intense bombardment. It accused Syrian leader Bashar al-Assad and Russia of waging a “scorched earth” campaign.

The military news service run by Hezbollah, an Iran-backed Lebanese terror group that fights on Assad’s side, named three other areas it said the Syrian army had captured at the eastern and southeastern rim of the rebel enclave.

With no sign of decisive Western pressure to halt the assault, eastern Ghouta appears on course to eventually fall to the much more heavily armed government side, which has recaptured many other areas using the same military tactics.

Russia has called for daily, five-hour “humanitarian” ceasefires in eastern Ghouta, and says rebels have prevented civilians from leaving. Rebels deny this. The U.S. State Department has called the Russian plan a “joke.”

The U.N. High Commissioner for Human Rights said in an emergency meeting of the United Nations’ Human Rights Council on Friday that events in eastern Ghouta likely included “war crimes and potentially crimes against humanity.”

Damascus says it is fighting terrorists who have escalated their shelling of government-held areas of the capital.

The Observatory says the government bombardment of Ghouta has killed more than 600 people since Feb. 18, while intensified rebel shelling of government-held areas has killed 27.

Turkey has rejected Western calls for it to suspend the Afrin assault in line with the U.N. ceasefire, which does not apply to Islamic State, al-Qaeda and terror groups associated with it, or other groups deemed terrorists by the Security Council.

Turkey views the YPG as an extension of the Kurdistan Workers’ Party (PKK), which has fought a three-decade insurgency in Turkey and is deemed a terrorist group by the United States, the European Union and Turkey. The YPG has been an important ally for the United States in the fight against Islamic State.

While the Syrian government has been at odds with the U.S.-allied Kurdish YPG in some parts of Syria, it has chosen to ally with it in the fight with Turkey in Afrin.

The Observatory said Turkish warplanes struck the pro-government “popular” forces at a camp in Kafr Jina.

The Syrian Democratic Forces (SDF), a YPG-led militia alliance, said in a statement that Turkish airstrikes had targeted positions held by the Syrian army’s “popular forces” from 5 a.m. (local time) until 10 a.m.

It did not say where or give a death toll.

Turkish Prime Minister Binali Yildirim said his country’s forces had captured the town of Rajo from terrorists, while the military said in a statement that the army had taken control of seven settlements including Rajo on Saturday.

The Observatory said Turkey was in control of about 70 percent of the town, which lies about 16 miles northwest of Afrin city.

The SDF statement said a group of Turkish forces and allied Syrian factions had infiltrated Rajo, where it said clashes were continuing between SDF forces and the terrorists.