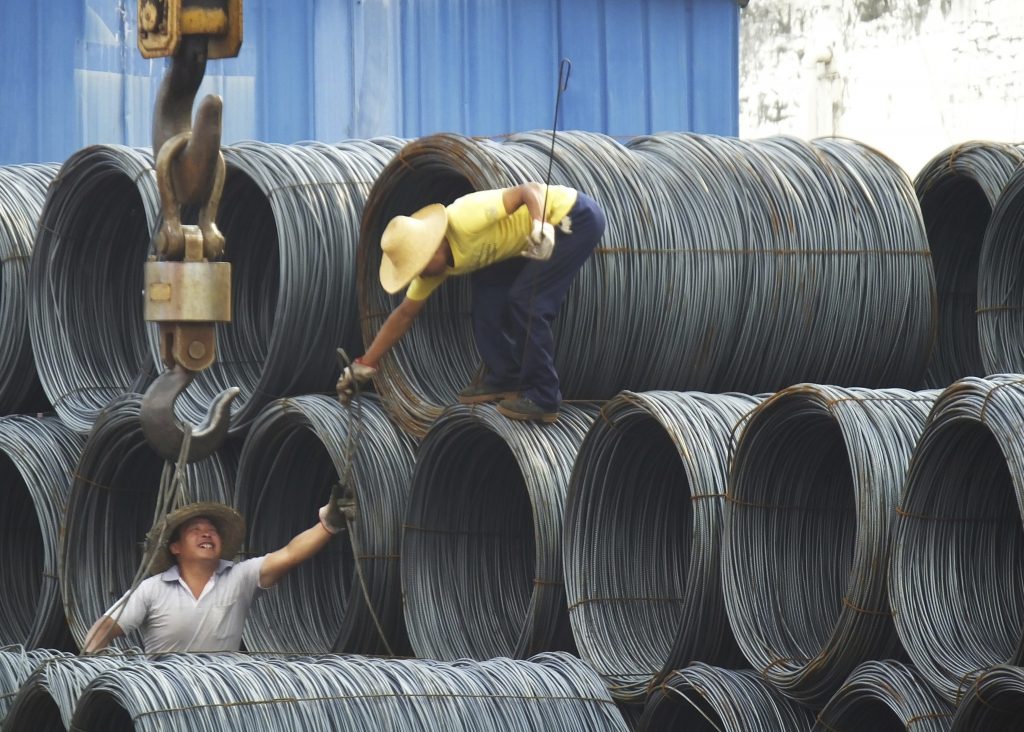 China had no immediate reaction Friday to U.S. President Donald Trump’s vow to impose high tariffs on steel and aluminum, which he followed up by insisting that trade wars “are good, and easy to win.”

Chinese leaders have threatened in the past to retaliate if Trump raises trade barriers, but now need to weigh whether to back up those threats with action and risk jeopardizing U.S. market access for smartphones and other exports that matter more to their economy than metals.

Global stock markets fell sharply Friday over worries of a possible trade war following Trump’s announcement that he will levy tariffs of 25 percent on steel and 10 percent on aluminum.

Early Friday, Trump thumbed his nose at the concerns over rising trade tensions and higher prices for U.S. consumers, tweeting that “trade wars are good, and easy to win. Example, when we are down $100 billion with a certain country and they get cute, don’t trade anymore-we win big. It’s easy!”

Beijing has accused Trump of undermining global trade regulation by taking action over steel, technology policy and other disputes under U.S. law instead of through the World Trade Organization.

Chinese officials have appealed to the White House since last March to avoid hurting both sides by disrupting aluminum trade. Their tone hardened after Trump launched a probe in August of whether Beijing improperly pressures companies to hand over technology and in January raised duties on Chinese solar modules and washing machines.

“China will take necessary measures to defend its interests,” a Commerce Ministry official, Wang Hejun, said in a statement this week.

Canada, Japan and South Korea, all U.S. allies and major exporters of steel and aluminum, are asking for exemptions from the tariff hike, which Trump justified in part on national-security grounds.

Canadian Foreign Minister Chrystia Freeland said it is entirely inappropriate to view any trade with Canada as a national-security threat to the United States and said Canada would view any trade restrictions on Canadian steel and aluminum as “absolutely unacceptable.”

“Should restrictions be imposed on Canadian steel and aluminum products, Canada will take responsive measures to defend its trade interests and workers,” Freeland said in a statement.

Canada is the biggest steel exporter to the U.S., and Freeland noted that Canada buys more American steel than any other country in the world, accounting for 50 percent of U.S. exports. She also noted that the steel and aluminum industry in North America is highly integrated and said that the Canadian government will continue to make that point directly with the Trump administration.

Hiroshige Seko, Japan’s trade and industry minister, said at a news conference, “We don’t think imports from Japan, an ally, have any effect at all on U.S. national security.”

A South Korean trade envoy, Kim Hyun-chong, met with Trump’s chief economic adviser, Gary Cohn, and Commerce Secretary Wilbur Ross to “strongly demand” they keep the impact on South Korean companies to a minimum, according to a trade ministry statement.

The president of the European Union’s governing body, Jean-Claude Juncker, said the 28-nation trade bloc will retaliate if Trump follows through.

“Risks of trade wars are rising, but should be contained for now,” said Cesar Rojas and Ebrahim Rahbari, of Citigroup, in a report. “We expect U.S. major trade partners’ reaction to be moderate, including by taking cases to the WTO.”

Adding to the political stakes in China, Trump’s announcement came ahead of next week’s meeting of its ceremonial legislature, the year’s most prominent political event. Action against American companies or goods would compete for attention with the National People’s Congress, which the ruling Communist Party uses to showcase its economic plans.

Beijing has an array of high-profile targets for retaliation, including suppliers of soybeans, the biggest American export to China. A curb on purchases could hurt farm-state voters who supported Trump.

“We’ve clearly heard from the Chinese” that soybeans “are definitely one of the largest things that could be targeted,” said Jake Parker, vice president for China operations for the U.S.-China Business Council.

However, Parker said, soybeans might be held for use later on a bigger issue such as the “301” investigation into Beijing’s technology policy, which could have a broader impact.

Trade makes up a smaller share of China’s economy than it did a decade ago. But export-driven industries support millions of jobs, raising the potential political cost of any disruption.

The United States, China’s No. 2 trade partner after the EU, buys about 20 percent of Chinese exports but allows Beijing to run multibillion-dollar surpluses that offset its deficits with other partners.

Last year, China exported goods worth $2.80 to the United States for every $1 of American goods it bought, according to Chinese data. Its trade surplus of $275.8 billion with the United States was equal to 65 percent of its global total.

“That makes China the more vulnerable partner in this,” said Kuijs.

Also Friday, the Commerce Ministry expressed “grave concern” about a trade policy report sent to the U.S. Congress by the White House this week that accuses China of moving away from market principles. It pledges to prevent Beijing from disrupting global trade.

The ministry said Beijing has satisfied its trade obligations and appealed to Washington to settle market access and subsidy disputes through negotiation.