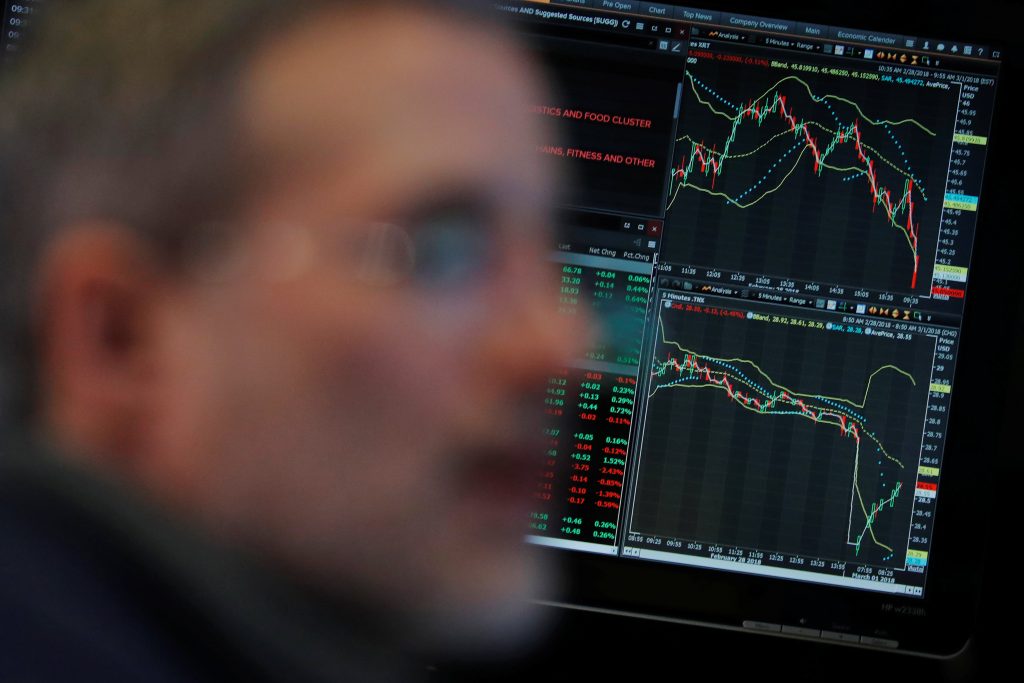 U.S. stocks sank sharply in another dizzying day of trading after President Donald Trump promised stiff tariffs on imported steel and aluminum, which investors feared could lead to retaliation by other countries and higher inflation.

Indexes had been bouncing between modest gains and losses earlier in the day, until Trump told industry executives that they’ll “have protection for the first time in a long while” and that next week he would level penalties of 25 percent on steel imports and 10 percent on aluminum imports.

“I don’t know if this will cause a trade war, and obviously that’s the fear,” said Lamar Villere, portfolio manager at investment manager Villere & Co. “But this is exactly what candidate Trump said he would do: He said he would be very protectionist and America-first.”

European Commission President Jean-Claude Juncker says the EU will take retaliatory action if Trump goes ahead with his plan to slap tariffs on steel and aluminum imports.

As a candidate, Trump often campaigned on an “America First” trade policy, but hadn’t taken many steps to implement that since he took office.

A big fear for investors has been that increasingly nationalistic governments will throw up barriers that will hurt the global economy and trade, as well as profits for U.S. exporters. The biggest U.S. company by market value, Apple, got 63 percent of its sales last fiscal year from foreign markets.

Stocks were higher earlier in the day after Federal Reserve Chairman Jerome Powell testified before Congress and appeared to calm one of the market’s main worries when he said that he does not see inflation in workers’ wages “at a point of acceleration.” Investors have been nervous about the possibility that the Fed may get more aggressive about raising interest rates to beat down inflation.

Worries about the possibility of much higher interest rates have been at the center of the market’s troubles in recent weeks. The index is coming off its worst month in two years, when concerns about higher inflation and rates helped trigger a 10 percent drop.

Earlier in the week, Powell helped send Treasury yields jumping and stocks tumbling when he said that he’s feeling more optimistic about the economy. Some traders took that as a signal that the Fed may raise rates more quickly than expected.

On Thursday, though, he said that “I would expect that some continued strengthening in the labor market can take place without causing inflation.”

Overstock.com dropped 5.5 percent after the online retailer disclosed in a regulatory filing that the Securities and Exchange Commission asked the company last month for information about a $250 million offering by its blockchain subsidiary, tZero, related to digital tokens. The stock sank $3.31 to $57.09.

The disclosure follows a report in the Wall Street Journal that the SEC sent subpoenas to dozens of companies demanding information about initial coin offerings and cryptocurrencies, which aren’t bound by the same rigorous rules that govern public offerings of stock.

Patterson Companies fell to the biggest loss in the S&P 500 after it reported weaker earnings for the latest quarter than analysts expected and said that its chief financial officer was leaving. Shares of the company, which sells dental and animal health products, dropped $8.80, or 27.9 percent, to $22.78.