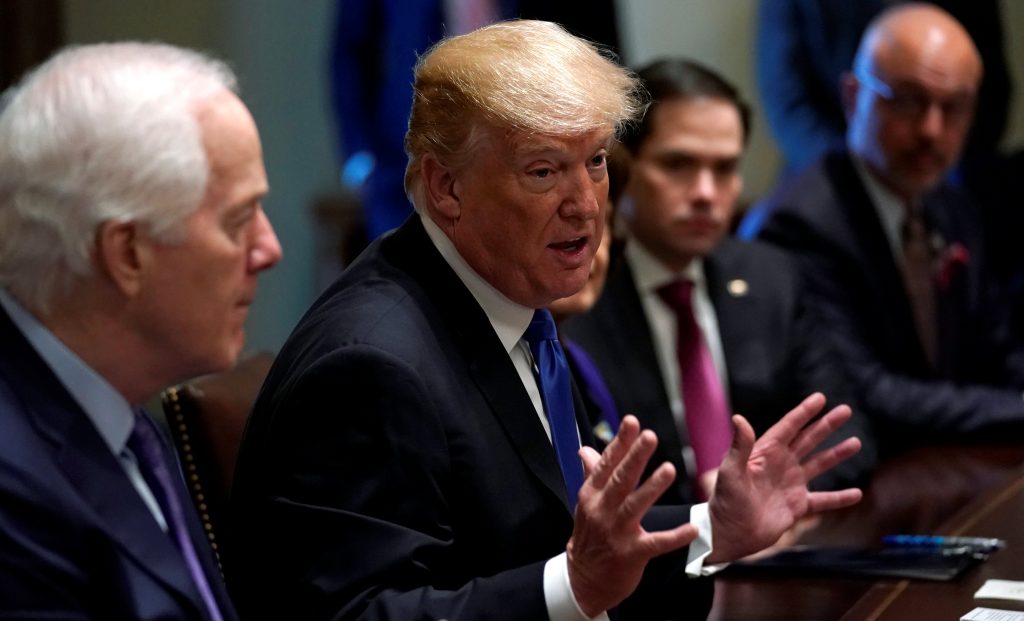 President Donald Trump on Wednesday went his furthest yet toward endorsing restrictions on gun sales, bucking Republican Party orthodoxy as he challenged lawmakers to go big on legislation he said would help prevent more school shootings.

Trump said he wanted to go beyond a narrowly focused bill to improve background checks for gun buyers that is backed by many of his fellow Republicans and instead develop a comprehensive plan – even if it includes measures opposed by the powerful National Rifle Association gun lobby, which backed his 2016 candidacy.

“I will sign it,” Trump said in a freewheeling hour-long discussion at the White House with a group of lawmakers.

Trump had been cautiously weighing changes to gun laws since a gunman killed 17 people at a high school in Parkland, Florida, on Feb. 14, igniting a wave of national student activism in support of firearms restrictions.

During Wednesday’s broadcast session, Trump, who has championed gun rights, embraced broader changes to the background check system than those contained in a proposal from John Cornyn of Texas, the No. 2 Senate Republican.

“You have to be very, very powerful on background checks. Don’t be shy,” Trump said.

“It would be nice if we could add everything on to it,” he said. The White House is set to present a list of Trump’s policy decisions on the issue as early as Thursday.

It was unclear whether his fellow Republicans would go along with his newfound enthusiasm, wary of angering voters who fiercely oppose curbs on gun ownership, particularly ahead of the November elections in which the party’s control of Congress will be at stake.

Pushing to expand Cornyn’s bill, which has been gaining steam in the Senate, could stall its progress.

Cornyn warned Trump against going big, acknowledging his bill was “not the end-all, be-all,” but describing it as a politically pragmatic starting point.

“In the past, we’ve acquiesced to failure, and have not done things that we know were within our power to accomplish,” he said at the meeting.

It is not the first time Trump has appeared to break with his party’s thinking in a quest to make a deal with Democrats.

In January, he met with a bipartisan group on the thorny immigration issue, pledging to “take the heat” if they came up with legislation. He was quickly reined in by conservative hardliners and a deal was never done.

Senate Democratic leader Chuck Schumer praised Trump’s ambition on guns, but said in a statement that “the next step is even more important.

“Despite the huge pressure that will come from the hard right, the president must stick with these principles,” Schumer said.

The Senate is not expected to bring up any gun legislation this week, and next week’s agenda is also unclear.

Trump chided lawmakers for being afraid of the NRA, which is known for its ability to mobilize voters who fear infringement of constitutional protections of gun ownership.

“They have great power over you people. They have less power over me. I don’t need it,” he said.

Trump said he told NRA officials during a private luncheon on Sunday: “It’s time. We’ve got to stop this nonsense. It’s time.”

The NRA said it believed beefing up school security was the answer, not the ideas discussed at Wednesday’s meeting.

“I thought it made for really good [media], but I thought some of what was discussed is going to make for really bad policy that is not going to protect our kids,” NRA spokeswoman Dana Loesch said on Fox News.

Trump continued to express support for arming teachers to protect students in the event of a mass shooting.

Some lawmakers flatly rejected the concept, and Trump agreed the matter should be left up to states.

Trump ruled out an NRA-backed proposal from his close ally, Steve Scalise, the No. 3 Republican in the House of Representatives, who was wounded in a mass shooting at a baseball practice last June.

Scalise said background check legislation should include a measure allowing people to bring legal, concealed guns across state lines. The House has already passed a background check bill with that provision, which Democrats oppose.

Trump said he personally agreed with the idea but that it would sink a comprehensive bill in the Senate, where Republicans hold a narrow 51-49 majority.

Trump said he supported raising the legal age to buy rifles to 21 from 18, but Republican Senator Pat Toomey of Pennsylvania said that would hurt young adults who enjoy hunting or target shooting without addressing the issue of mass shootings.

The president expressed support for the first time for state laws that allow police to temporarily seize guns from people reported to be dangerous, but went even further to say they should not need to get a court order beforehand. “Take the firearms first, and then go to court,” Trump said.

That raised the ire of Republican Senator Ben Sasse, who was not at the meeting. “We have the Second Amendment and due process of law for a reason. We’re not ditching any Constitutional protections simply because the last person the president talked to today doesn’t like them,” Sasse said in a statement.