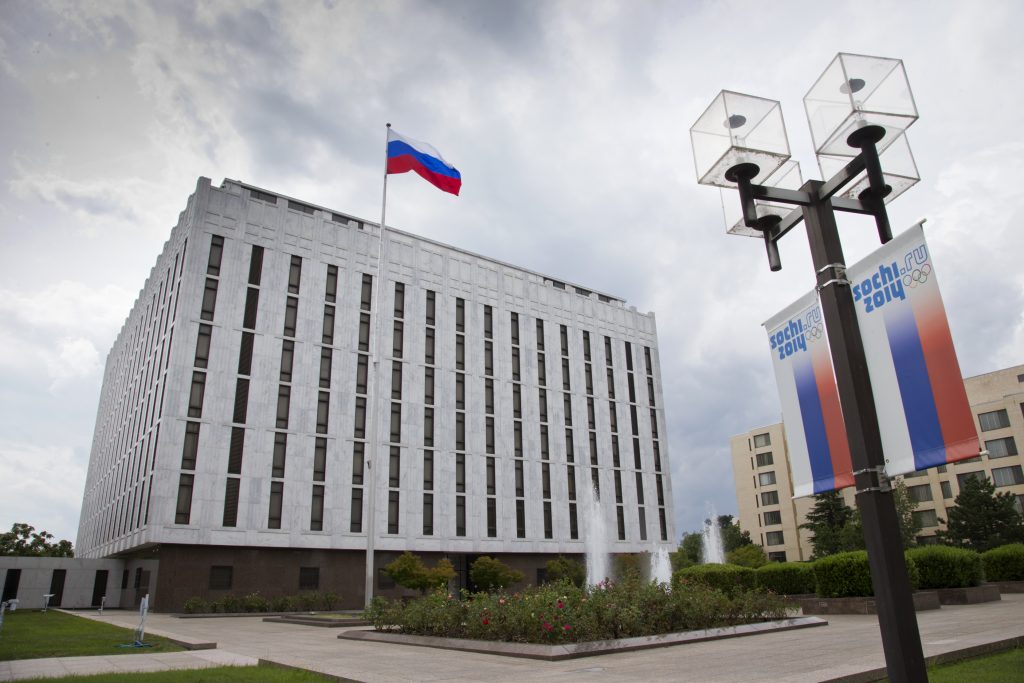 The Russian Embassy in Washington has a new address, at least symbolically.

A one-block section of Wisconsin Avenue directly in front of the embassy was officially renamed Boris Nemtsov Plaza on Tuesday, in what amounts to a D.C.-sponsored effort to troll the Russian government.

A former deputy prime minister, Nemtsov became an opposition activist and vocal public critic of President Vladimir Putin. He was shot dead while walking on a bridge near the Kremlin three years ago.

The move to rename the street started in the U.S. Congress at the urging of Sen. Marco Rubio, R-Fla., and others.

“This serves as an enduring reminder to Vladimir Putin and those who support him that they cannot use murder and intimidation to suppress dissent,” Rubio said.

Such politicized street-naming games are not new to Washington. In recent years, there have been moves to name the street on which China’s embassy is located after famed Chinese dissident and Nobel Peace laureate Liu Xiaobo, who died in prison in 2017. Members of Congress have also supported a similar effort to rename a portion of the road that is home to Cuba’s embassy after Oswaldo Paya, a pro-democracy activist who died in a 2012 car accident that some believe may have been set up by the Cuban government.

And this isn’t even the first time that Russia has been targeted by provocative street naming. Back in the Cold War days, when what was then the Soviet embassy was located on 16th Street, the city named a portion of the street after famed dissident Andrei Sakharov.

The United States is not alone in such trolling. There is a long history of both national and municipal governments trying to score political points by renaming streets to irritate other countries.

During the Vietnam War, India renamed the street where the U.S. consulate in Kolkata is located after North Vietnamese leader Ho Chi Minh. Iran and Egypt had no diplomatic ties for decades, and only restored them after Iranian officials agreed in 2004 to change the name of a Tehran street that had been named after the man who assassinated Egyptian President Anwar Sadat.

More recently, some Russian politicians have suggested retaliating for the Nemtsov change by renaming a street outside the U.S. Embassy in Moscow “North American Dead End.”

The decision to create Boris Nemtsov Plaza also represents a rare moment of harmony between the U.S. Congress and Washington city government, which normally chafes under the federal government’s oversight power over all District of Columbia decisions.

When the original street-renaming bill stalled in the Senate, Rubio turned to the D.C. Council for help. Councilmember Mary Cheh agreed to sponsor the bill, which breezed through the council in January after public hearings that included testimony from Nemtsov’s daughter, Zhanna Nemtsova.

Cheh on Tuesday noted that Moscow police have prevented Nemtsov supporters from maintaining a shrine at the site of his killing, repeatedly clearing away candles and flowers from the bridge.

Congresswoman Eleanor Holmes Norton, the non-voting representative of Washington in Congress, noted with satisfaction that the city council was able to quickly accomplish what the Senate couldn’t.

“We might have been here in time for next year’s anniversary (of Nemtsov’s killing) if we were dependent on the Congress,” she said.

Several speakers, including Rubio, took the opportunity to criticize Pres. Putin, not only for his repression of dissent but for Russia’s interference in the 2016 U.S. presidential election.

Rubio condemned both Pres. Putin’s “aggressive policies inside Russia” and his “effort to interfere in the democratic process inside the United States.”