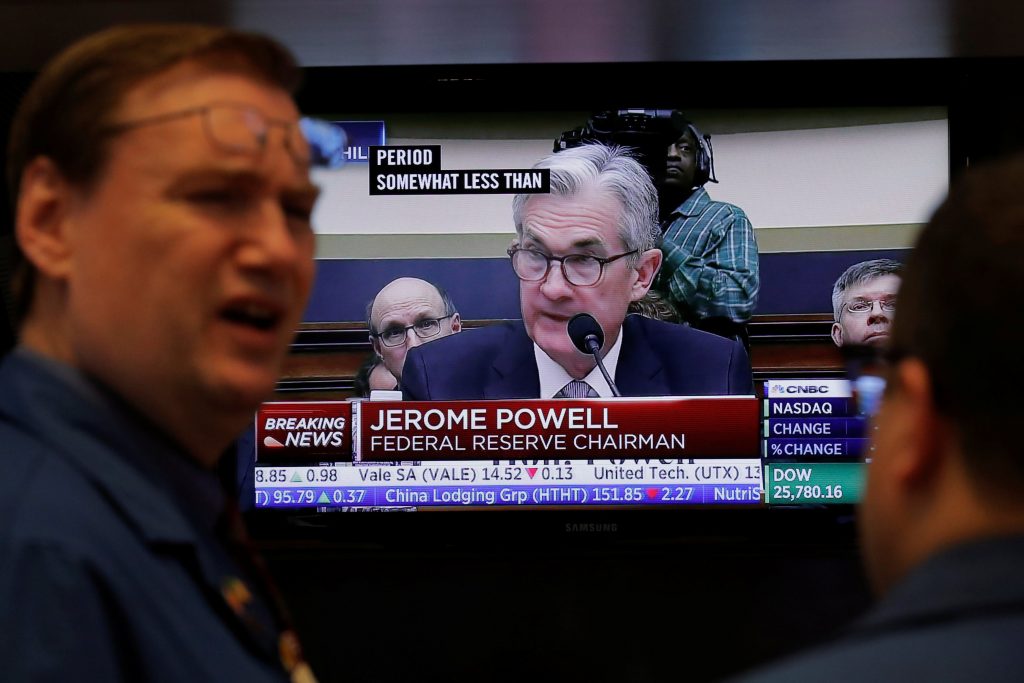 Treasury yields rose Tuesday, and U.S. stock indexes fell after the head of the Federal Reserve said that he’s feeling more optimistic about the economy.

The testimony by Fed Chairman Jerome Powell before Congress was highly anticipated, and investors dissected his every word for clues about how quickly the central bank will raise interest rates in the face of a growing economy and the threat of higher inflation.

FED SPEAK: Powell made his first public comments as head of the Federal Reserve, and he reaffirmed to the House Financial Services Committee that the central bank plans to raise interest rates gradually as the economy improves.

The Fed increased rates three times last year, and investors are debating whether this year will see three or four more moves. The market got spooked last month when potential signs of inflation strengthened, which raised expectations that the Fed may become more aggressive and knocked stock prices down by 10 percent around the world.

“My personal outlook for the economy has strengthened since December,” Powell said in response to a question about whether the recently passed tax cut and other moves by Congress have changed his outlook for how quickly the Fed will raise interest rates.

The yield on the 10-year Treasury note climbed to 2.91 percent from 2.86 percent late Monday. It had been down earlier in the morning.

The two-year Treasury yield, which is more influenced by expectations for Fed movements, climbed to 2.27 percent from 2.23 percent.

REGISTERS RINGING: Macy’s jumped to one of the biggest gains in the S&P 500 after the retail giant reported sales and profits that were comfortably ahead of expectations. It also gave a forecast for 2018 earnings that was higher than analysts expected.

Shares of Walt Disney also fell because the Comcast bid could disrupt its takeover offer for 21st Century Fox. Disney lost $4.43, or 4 percent, to $105.38.

DIVIDENDS DULLED: Stocks that pay big dividends had some of the market’s steepest losses after Treasury yields rose. When bonds are paying more in interest, they can divert buying by income investors away from dividend-paying stocks.

Real-estate investment trusts in the S&P 500, which are among the biggest dividend payers, lost 1.9 percent for the biggest loss among the 11 sectors that make up the index. Utilities fell 1.5 percent.

MARKETS OVERSEAS: Stock indexes were mixed in Europe, with France’s CAC 40 close to flat and Germany’s DAX down 0.3 percent. The FTSE 100 in London was down 0.1 percent.