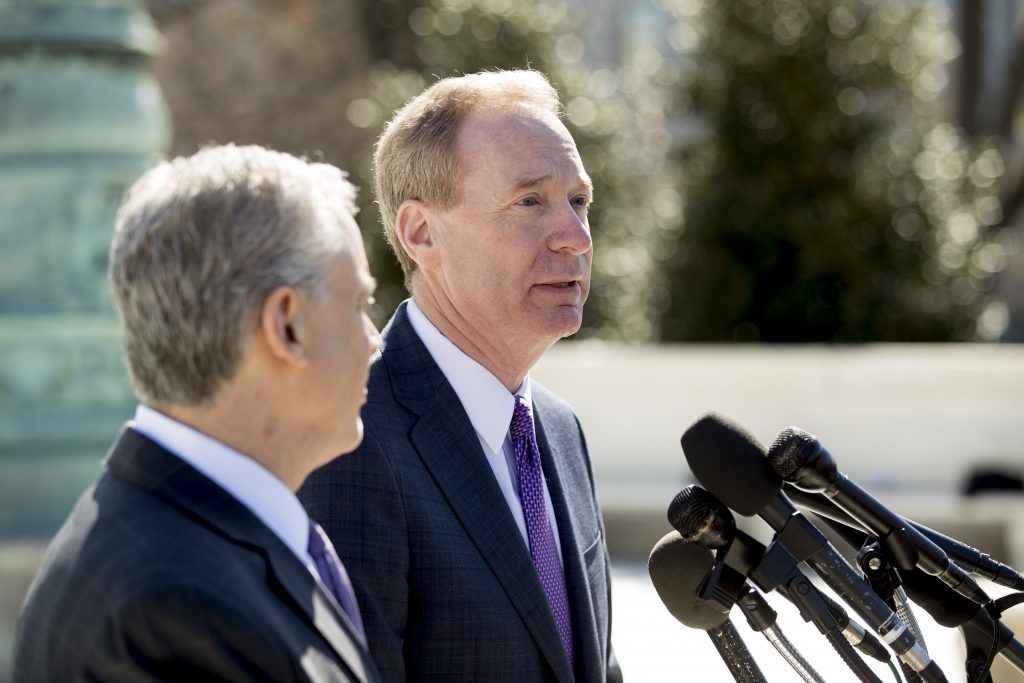 The Supreme Court appeared ready Tuesday to allow the government to force American technology companies to hand over emails and other digital information sought in criminal probes but stored in the internet cloud outside the U.S.

The justices heard arguments in a dispute between the Trump administration and Microsoft Corp. over a warrant for emails that were sought as part of a drug trafficking investigation. Microsoft refused to turn over the emails because they are stored on a company server in Dublin, Ireland, and the warrant does not apply abroad.

But several justices suggested they agreed with the government’s argument that the focus should be on Microsoft’s headquarters in Redmond, Washington. That’s where a computer operator would retrieve the emails and hand them over to federal authorities.

The case arose when the Drug Enforcement Administration obtained a warrant for the emails under a 1986 law. Microsoft turned over some information, but went to court to defend its decision not to hand over the emails from Ireland.

The federal appeals court in New York agreed with the company that the 1986 Stored Communications Act does not apply outside the United States.

The arguments highlighted the difficulty that judges face in trying to square decades-old laws with new technological developments.

“I recognize we have a difficult statute here,” Justice Anthony Kennedy said.

When the law was written, Justice Ruth Bader Ginsburg said, “No one ever heard of clouds. This kind of storage didn’t exist.”

Ginsburg and other justices said it would be better if Congress updated the law. Sen. Orrin Hatch, R-Utah, who was in the courtroom Tuesday, is a sponsor of a bipartisan proposal that has been introduced in Congress.

The legislation known as the Cloud Act has the support of both the Trump administration and Microsoft.

But lawyers on both sides said the court should decide the case before it, not wait for Congress to act.

Justice Department lawyer Michael Dreeben told the court that Microsoft voluntarily moved the emails to a server in Ireland and could just as easily retrieve them. He stressed that the government had a warrant, “the gold standard,” for addressing privacy concerns.

“It’s not a case about privacy,” said Dreeben, who is part of special counsel Robert Mueller’s Russia investigation team, but has occasionally argued important cases at the Supreme Court.

Joshua Rosenkranz, representing Microsoft, described how much physically has to happen in Ireland when someone at Microsoft headquarters issues a command to retrieve emails from the Dublin server. Even after the emails are found, the data “runs through Ireland on hard wires and then over the Atlantic,” Rosenkranz said.

“Does some person have to be there?” Kennedy asked.

No, a robot handles the work in Ireland.

Justice Sonia Sotomayor jumped in. “I guess my imagination is running wild,” Sotomayor said to laughter. “Who tells the robot what to do?”