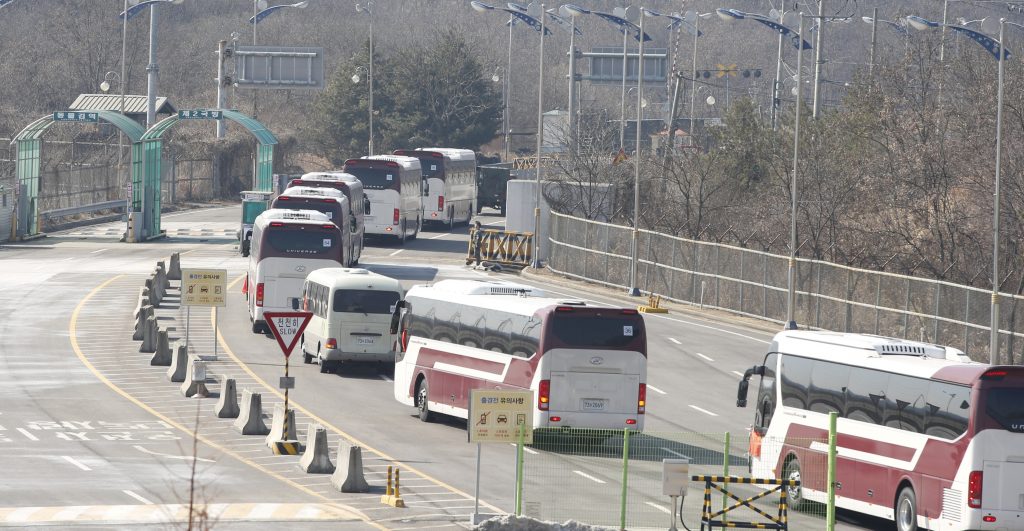 South Korean President Moon Jae-in said on Monday that the United States and North Korea should both give ground so they can sit down to talks to try to resolve a nuclear standoff, a day after Pyongyang expressed willingness for dialogue.

South Korea has engaged in a flurry of talks with North Korean officials since January, hoping to improve relations with the South’s just concluded Winter Olympics as a catalyst for rapprochement.

“Recently, North Korea has shown it is open to actively engaging the United States in talks and the United States is talking about the importance of dialogue,” Moon said during a meeting in Seoul with Chinese Vice Premier Liu Yandong.

In August, Trump threatened to go beyond sanctions by bringing “fire and fury like the world has never see,” although his administration has repeatedly said it prefers a diplomatic solution.

North Korea has vowed never to give up its nuclear program, which it pursues in defiance of U.N. Security Council resolutions, calling it a  “powerful treasured sword for defending peace” against U.S. aggression.

The United States, which stations 28,500 troops in South Korea, says any talks with North Korea must lead to an end to its nuclear program. Washington on Friday announced its largest package of sanctions yet.

North Korea condemned the move, accusing the United States of trying to undermine the improvement in inter-Korean relations.

A high-level delegation from North Korea has been visiting Seoul and meeting South Korean officials, including Moon, after attending the Olympics’ closing ceremony in Pyeongchang on Sunday.

The delegation told Moon during a meeting in Pyeongchang that North Korea was open to talks with Washington. The North Koreans attended a dinner hosted by Unification Minister Cho Myong-gyon, where participants agreed to keep working to boost inter-Korean ties, the ministry said.

Ministry spokesman Baik Tae-hyun said he hoped constructive talks between North Korea and the United States could begin when “an appropriate opportunity” arises.

The North Korean delegation, led by former military intelligence chief Kim Yong Chol, met Chung Eui-yong, security adviser for the presidential Blue House, and other South Korean government officials for lunch on Monday. Kim Yong Chol was accused by the South of being behind the sinking of a South Korean warship in 2010 that killed 46 sailors and has been the subject of protests since his visit was announced. North Korea has denied the allegations.

“Both sides agreed to work together for permanent peace on the Korean Peninsula, sustainable relations between North and South Korea and balanced cooperation with the international society,” the South’s presidential office said in a statement.

Kim Yong Chol and his delegation will leave on Tuesday, just as North and South Korean officials gather on the North’s side of the Panmunjom truce village to discuss Pyongyang’s attendance at the Pyeongchang Paralympics.

Impoverished North Korea and the rich, democratic South are technically still at war because their 1950-53 conflict ended in a truce, not a peace treaty. The North regards regular military drills between the South and its main ally, the United States, as preparations for war.

Hundreds of right-wing protesters gathered in central Seoul on Monday to criticize Moon and his administration for hosting the North Koreans, Kim Yong Chol in particular.

His visit has enraged families of the sailors who were killed in the torpedo attack. The SouthKorean government said it had approved the delegation as it pursues peace on the peninsula.

A total of 299 North Koreans who were in South Korea for the Winter Games returned to the North on Monday.