Fat is Back and Premium Butter Makers Are Taking the Cream 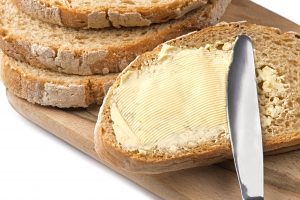 Consumers aren’t just eating more butter, they are willing to pay more for it, a boon that’s giving outsize gains to makers of premium brands.

Global retail butter sales will expand 2.9 percent to $19.4 billion in 2018, outpacing the 1.9 percent growth in sales volumes, according to Euromonitor International. The trend is fanning the expansion of international brands benefiting from a consumer shift to more natural fats, according to Raphael Moreau, a senior research analyst with the research firm in London.

Demand for butter, cream and other commodities rich in butterfat has increased after consumer perceptions were swayed by studies indicating lower health risks from consuming dairy-fat and the detrimental effects of alternative trans fats, the U.S. Department of Agriculture said in a Feb. 14 report. That’s underpinning prices, which reached a record last September amid shortages in Europe.

“Consumers are increasingly demanding dairy products that are richer in fat as they are allowing fat, and thus also butter, back into their diets,” Hanne Soendergaard, Arla Foods amba’s executive vice president of marketing and innovation, said in an email.

“The global sales of U.S. companies benefited strongly from this rise in butter consumption in their domestic market,” he said. This was particularly the case for Land O’ Lakes Inc., an Arden Hills, Minnesota-based cooperative owned by farmers and ranchers, whose namesake butter brand is the world’s most-valuable, according to Euromonitor.

“There is a bigger differentiation in the U.S. market as the domestically produced butter is 80 percent fat, while the global standard is 82 percent fat,” McCully said. More fat often means more flavor. “You can also find slow-churned butter with higher fat, cultured butter, and other more specialty butters that, while small in volume, are increasing in share.”

Raw milk is processed to make butter and skim milk powder, an ingredient used in everything from infant formula and dough nuts to ice cream. An oversupply of skim milk powder, or SMP — and corresponding low prices — have made dairy processors reluctant to increase production, effectively limiting butter supplies.

From a 2-million-ton butter stockpile in the mid 1980s, global inventories have dwindled to less than 12 days’ supply, an analysis of USDA data show. Coupled with strong demand in many markets, that should keep prices high.

European butter prices rocketed to 6,500 euros ($8,000) a metric ton last September from 2,350 euros/ton in March 2016, Aylward said in a Jan. 4 statement. While prices fell in the fourth quarter of 2017, so far in 2018 they have gained about 19 percent for exporters in New Zealand, the world’s largest butter exporter.

In the longer term, prices will strengthen in 2018 and dip over the next few years before reaching new highs within a decade, the USDA predicted this month.

Currently, major butter-buyers are likely to delay orders until European milk production picks up in the spring, when higher supplies are expected to soften prices, according to Steve Spencer, director of Fresh Agenda, a Melbourne-based food researcher and advisory firm. Spencer said he was surprised at how resilient more-affluent butter markets in Southeast Asia were amid the soaring prices.

“When prices rose sharply around the world, some markets didn’t flinch, still demand held up,” he said in an interview. “The world industry has done a good job convincing consumers that this is ‘good’ fat and better, and there’s nothing like testing how loyal they are by hiking prices.”

It’s not just butter that’s benefiting from consumers’ renewed taste for animal-fats. Danone, the world’s largest yogurt maker, has started selling a full fat version of its Activia brand in the Nordic region, “which nobody would’ve expected to exist a few years ago,” Chairman and Chief Executive Officer Emmanuel Faber said last week.

“There is a very segmented approach to what consumers consider as healthy or not,” Faber told analysts and investors on a Feb. 16 conference call to discuss fourth-quarter earnings. “Sugar is clearly not what they want to see, but fat, including animal fat, is a trend that’s back.”

Rebecca Keenan contributed to this report.