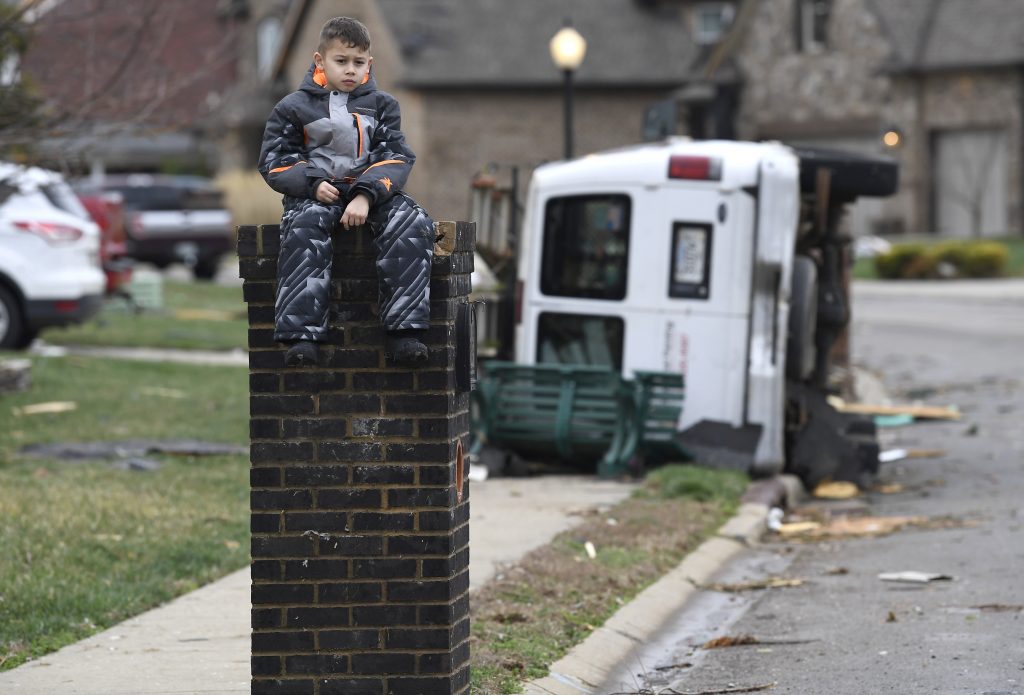 The death toll rose to at least five on Sunday after severe thunderstorms swept through the central U.S., spawning a tornado that flattened homes, gale force winds and widespread flooding from the Upper Midwest to Appalachia.

The system that stretched from Texas to the Canadian Maritime provinces had prompted several emergency declarations even before the dangerous storms arrived.

In southwestern Michigan, the body of a man was found floating in floodwaters Sunday in Kalamazoo, city Public Safety Lt. David Thomas said.

Thomas said the death didn’t appear suspicious and that authorities were trying to determine the man’s identity and cause of death. Kalamazoo has been hard hit by flooding from last week’s heavy rains and melting snow.

A body was recovered from a vehicle that was in a ditch in in western Kentucky near Morganfield, the Henderson Fire Department said on its social media. The body has been sent to a medical examiner for an autopsy.

And a male’s body was pulled from a vehicle in a creek near the south central Kentucky community of Franklin on Saturday, the Simpson County Sheriff’s Office said in a statement. The victim’s identity was being withheld pending notification of relatives.

About 20 miles away, Dallas Jane Combs, 79, died after a suspected tornado destroyed her Adairville home earlier Saturday, the Logan County Sheriff’s Office told media outlets. Sheriff officials said Combs was inside the home when it collapsed on her. Combs was pronounced dead at the scene.

Authorities said Combs’ husband was outside putting up plastic to keep rain out of the home when he was blown into the basement area. He sustained minor injuries.

The fifth death was in northeast Arkansas, where an 83-year-old man was killed after high winds toppled a trailer home. Clay County Sheriff Terry Miller told KAIT-TV that Albert Foster died Saturday night after the home was blown into a pond.

About 50 miles away, the National Weather Service said the roof was blown off a hotel in Osceola, about 160 miles north of Memphis, Tennessee.

In Middle Tennessee, the National Weather Service on Sunday confirmed an EF-2 tornado with maximum winds of 120 mph hit Clarksville on Saturday.

Montgomery County Sheriff’s Office spokeswoman Sandra Brandon said at least four homes were destroyed and dozens of others were damaged, while 75 cars at a tire plant parking lot had their windows blown out or were tossed onto one other.

“To look at what I’m looking at and know we didn’t lose anybody is just a miracle,” Montgomery County Mayor Jim Durrett told The Leaf-Chronicle.

At Austin Peay State University in Clarksville, a teenage girl was hit by falling debris at a college basketball game after an apparent lightning strike knocked a hole in the arena’s roof Saturday night. School director of marketing and digital media Kevin Young said the 15-year-old girl was taken to a hospital as a precaution. The extent of her injuries wasn’t immediately released.

The game was stopped with 5:49 left in the second half due to the leaky roof. Fans took shelter in nearby hallways and athletic offices before play resumed after a more than a three-hour delay.

Austin Peay President Alisa R. White said on Twitter that athletics department officials and physical plant workers “did a great job handling a big crowd and the elements in what could have been a much worse situation.”

Clarksville is about 48 miles northwest of Nashville, Tennessee.

The governors of Missouri, Indiana and Illinois declared disaster emergencies. Flood watches and warnings spanned multiple states Sunday morning, from Missouri to central Pennsylvania, while a wind advisory remained in effect for nearly all of Lower Michigan.

Wind gusts of up to 50 mph in places have downed power lines in several states hugging Lake Michigan.

Consumers Energy said Sunday it was working to restore power to more than 20,000 customers across Michigan.

Police blocked one road in Chicago after a piece of metal ripped loose and dangled from a high-rise apartment. No injuries were reported.

The weather service said moderate flooding was expected along the Ohio River in Kentucky and Ohio, including in Cincinnati, where the river was eight feet above flood stage Sunday.

Transportation officials said parts of Interstate 64 in Louisville, Kentucky, were closed in both directions Sunday due to high water.