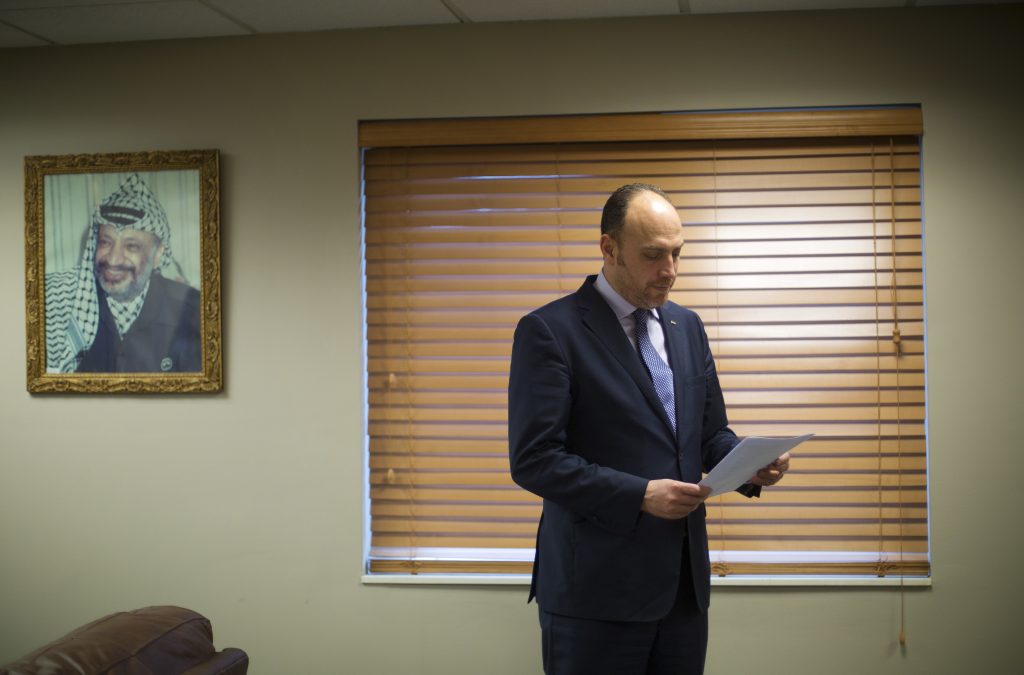 The Palestinian envoy to Washington sits in his office these days wrestling with a unique diplomatic dilemma: how to transact diplomatic business when relations with the United States are so distant that he hasn’t even spoken to the White House in months.

“It’s not like I am not speaking to them. My phone is open,” Husam Zomlot, the Palestinian ambassador, said in an hourlong interview in his office, flanked by the Palestinian flag and portraits of Abbas and former PLO chief, arch-terrorist Yasser Arafat.

No one has called, he said. Not since Dec. 6 — the day of President Donald Trump’s recognition of Yerushalayim as Israel’s capital. In angry response, the PA then launched a boycott of American Mideast envoys, and said that the U.S. is no longer an honest peace broker.

However, the waters were troubled before that, as a result of Palestinian behavior. In November, eight months after Zomlot’s arrival, the Trump administration announced it was shutting him and his operation down because Abbas, in a U.N. speech, had violated American law by calling for Israelis to be prosecuted in international court.

After a public backlash, the Trump administration reversed course. It said the Palestine Liberation Organization’s mission could stay open, but scaled back: Only activities advancing Israeli–Palestinian peace talks would be allowed. The U.S. instructed the Palestinians against making new long-term commitments like signing leases or employee contracts.

Nor has there been any substantial contact between the Palestinians and the Americans at the United Nations, according to officials from both sides. Even Tuesday, when White House advisor Jared Kushner and colleague Jason Greenblatt traveled to New York to hear Abbas address the U.N. Security Council, no face-to-face interaction between the sides occurred. This, despite the fact that Ambassador Nikki Haley stated they stood ready to engage the Palestinians at any time.

Zomlot — who calls himself “the man in the eye of the storm” — said the lesson learned from recent months is the Palestinians long approached their task in the wrong order. They’d hoped U.S.-led talks would yield a deal granting them legitimacy in America and elsewhere. But now, he said his people must first “correct” their bilateral relationship with the United States, building trust in each other as partners in peace.

So Zomlot, a close Abbas confidant and Ph.D. economist, spends his days at the Palestinians’ red-bricked delegation office along Georgetown’s Wisconsin Ave., sipping thick Turkish coffee with members of Congress, academics, think-tank types and representatives of the Arab and Jewish communities, trying to promote the Palestinian cause. He said he asks every lawmaker he meets the same question.

“Who are we? What is this office? Are we your peace partners? Your negotiating partners? Are we the secular liberal democratic movement that you want to empower as an inclusive movement? Or are we the terrorists, as designated by your own law?” Zomlot said, referring to a special marker in his passport that says he can enter the U.S. despite restrictions in the Palestinian Anti-Terrorism Act of 2006.

“What’s crucial at this point in time is not to be obsessed about the box we are in. We just need to find a way out of this box,” Zomlot said, adding, “We are boxed — all of us.”

Case in point: The one activity the Palestinians are decidedly not engaged in — direct, active peace talks — is the only activity they are currently permitted to conduct in Washington.