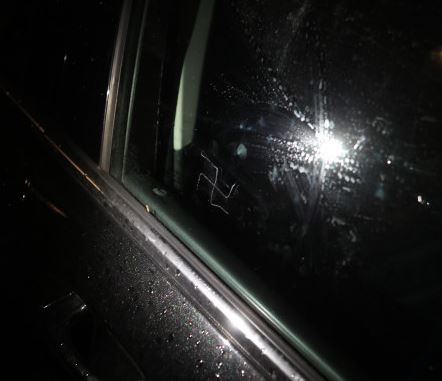 The NYPD is investigating after swastikas were found scratched onto two cars in Boro Park Wednesday night.

The swastikas were found on the front passenger side windows of a black Ford sedan and a silver Lexus SUV, parked on 52nd Street near 17th Avenue. The Hate Crimes Task Forcehas been notified of the incident.

Assemblyman Dov Hikind and State Senator Simcha Felder are offering a $3,000 reward for information that leads to the arrest and conviction of the perpetrator.

“Once again, the specter of hate rears its ugly head in our community,” said Felder. “I am outraged and saddened to learn of the recent etching of swastikas into the windows of two cars in Boro Park. As home to the largest number of Holocaust survivors in the United States, this obvious hate crime is particularly egregious and painful.”

“It takes a special kind of sick, mean-spirited hatred to sneak out in the middle of the night and do something like this to people you’ve never met, just because they are Jews,” said Hikind. “I’m hopeful our excellent police department will catch the perpetrator of this hate crime – as others have been caught in the past – and look forward to seeing the person brought to justice for their cruel vandalism.”