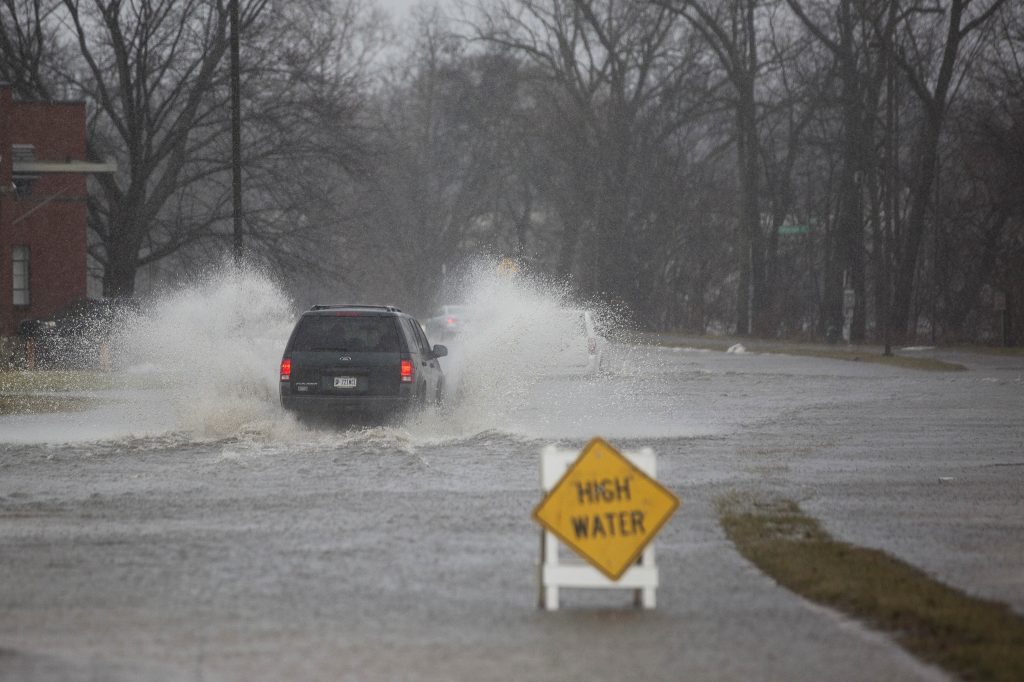 Sandbags were holding back floodwaters in parts of Michigan as a storm system moved across several Midwest and Great Plains states on Wednesday, bringing heavy rain, snow and ice to the region.

The weather has already been blamed for hundreds of car crashes and several fatalities, including the deaths of four people in a crash along a slippery interstate in Nebraska.

Melting snow and heavy rain prompted the National Weather Service to issue flood warnings for parts of northern Illinois and northern Indiana, as well as southern Wisconsin and much of Michigan’s Lower Peninsula. Flood warnings also were issued for parts of Missouri and Texas.

Flooded streets in Michigan stranded motorists and a school bus in Flint, while residents in Mattawan, in the southwestern part of the state, used sandbags to protect homes and businesses as the Mattawan Creek rose above its banks.

“We just got to wait for it to go down,” Mattawan resident Terry Teeter, who installed pumps to keep water away from his house, told WOOD-TV. “It’s going to be a couple of days like this.”

In Illinois, the fear of rising water along the Illinois River forced the evacuation late Tuesday of the LaSalle County Nursing Home in Ottawa. In Indiana, homes and streets were flooded in the South Bend area, and forecasters predicted the local St. Joseph River wouldn’t crest until Thursday.

Flood watches were issued for several states, while winter weather advisories were in effect Wednesday for an area stretching from southwestern Illinois to Texas, including parts of Oklahoma, Kansas, Missouri and Arkansas.

The weather stretched as far south as Arkansas, where strong winds toppled power lines and damaged some buildings late Tuesday and early Wednesday.

Two days of rain in southern Wisconsin swelled waterways, prompting road closures. Police and firefighters rescued people from vehicles stranded in high water Tuesday at two sites in Janesville. In western Michigan, officials said a washout from heavy rains may have caused two engines from a freight train to derail near Grand Rapids. No injuries were reported.

A 52-year-old woman from Bourbonnais, Illinois, was found dead Tuesday in a submerged car in Peotone, south of Chicago. The woman apparently lost control of her car on southbound Illinois Route 45 and ended up in a rain-filed ditch, Peotone Fire Protection District Deputy Chief Bruce Boyle said.

In eastern Nebraska, speed and slippery pavement caused a crash between a pickup truck and a semitrailer Tuesday that killed four people on Interstate 80, police said. The three men and one woman killed were from Colorado, authorities said.

The Kansas Highway Patrol said a 38-year-old woman died and two other people were injured in a collision on an icy highway late Monday. In Minnesota, state police said winter weather contributed to 400 crashes and 250 spinouts, including two fatal accidents.

The storm system stretched to Texas, where weather service officials said three tornadoes hit. One struck early Tuesday in a rural area near Joshua, destroying at least two mobile homes and severely damaging several others. A mother and her disabled daughter were injured when one twister demolished their mobile home.