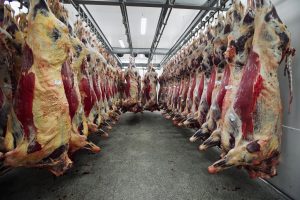 The U.K. Labour Party recently released an animal-welfare report with 50 proposals, including one that raised immediate warning flags within the Jewish community: the “mandatory labelling of domestic and imported meat, including country of origin, method of production and slaughter (stun or non-stun).”

The issue of labeling meat that has been stunned before slaughter has been an ongoing one for some time, both in the U.K. and the wider EU. It would mainly affect kosher meat, as many Muslim authorities allow some forms of stunning before halal slaughter.

“It is unfortunate that the Labour Party’s proposal regarding meat labelling is behind the curve. Informed circles have now moved this discussion on to comprehensive method of slaughter labelling which would ensure that consumers know whether their meat has been killed by captive bolt shooting, gassing, electrocution by tongs or water, or any of the other approved methods. It is neither correct nor sufficient for meat to be labelled as ‘stunned’ or ‘non-stunned’ as we must be careful not to mislead the consumer into believing that mechanical stunning is a kind medicinal process, gently sending the animal into a woozy state of unconsciousness. Mechanical stunning is an aggressive, invasive procedure which many people and organizations object to.

“Comprehensive method of slaughter labelling is welcomed by religious communities and animal welfare groups alike and we would urge the Labour Party to urgently review their policy.”