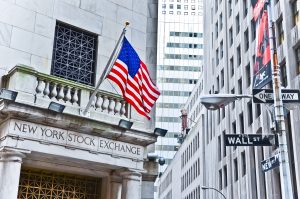 U.S. stock indexes were mostly higher in midday trading Tuesday as investors sized up earnings from several big companies. Disappointing results sent Walmart into a steep slide, pulling down shares in other major retailers and cutting into gains from a rally in technology stocks. The market, which reopened for business after a long holiday weekend, is coming off a six-day winning streak.

BIG-BOX BUMMER: Walmart shares were on track for their worst loss since October 2015 after the retailer reported fourth-quarter results that missed Wall Street’s expectations as its e-commerce sales in the U.S. slowed. The stock was the biggest decliner in the Dow and S&P 500, shedding $9.50, or 9.1 percent, to $95.28. Several big retailers also declined, including Target, which slid $1.84, or 2.5 percent, to $73.24.

FASHIONABLE EXIT: Gap gave up 3.1 percent after the clothing chain said the CEO of the Gap brand will leave the company. Jeff Kirwan has been with the company since 2004 and has led the namesake brand since the end of 2014. The Gap noted that Kirwan failed to achieve “the operational excellence and accelerated profit growth” that the company expected for the Gap brand. The stock slid $1.02 to $32.25.

HOUSING BOOST: Home Depot rose 1.4 percent after its latest quarterly results beat analyst estimates. The home-improvement giant benefited from strong demand for its wares amid a robust housing market and ongoing hurricane recovery work in the Southeast and Puerto Rico. Its shares added $2.66 to $189.63.

DRUGSTORE BUY: Rite Aid gained 4 percent after grocery store operator Albertsons agreed to buy more than 2,500 of its stores. Rite Aid agreed to sell almost 2,000 locations to Walgreens last year after a larger deal fell apart. Albertsons owns brands including Safeway. The deal will double the amount of drugstores it owns. Rite Aid’s stock, which has shed more than half its value over the past year, rose 8 cents to $2.22.