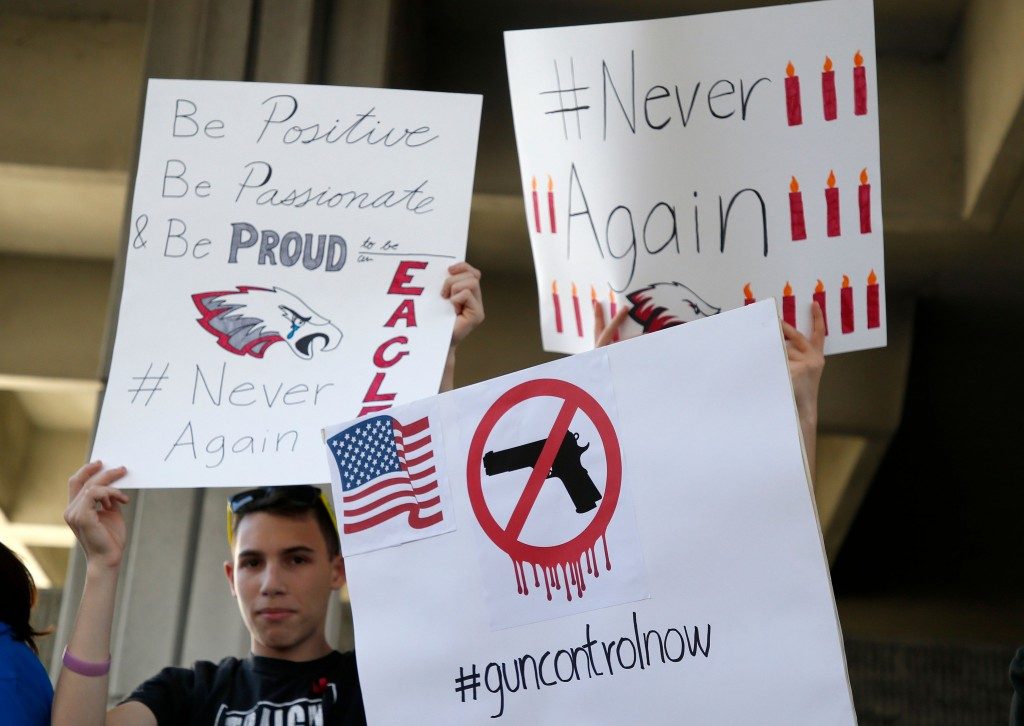 Once again, America mourns innocent victims of yet another senseless mass shooting. Adding to the pain and grief is the fact that this latest attack — like too many previous ones — took place at a school, the Marjory Stoneman Douglas High School in Parkland, South Florida.

Seventeen people, including students and faculty members, tragically lost their lives when a nineteen-year-old former student, armed with a semi-automatic rifle, opened fire. The perpetrator has been charged with seventeen counts of premeditated murder.

We offer our deepest condolences to the family and friends of the victims of this horrific tragedy. Their loss is immense, and their anguish is unimaginable. All of America grieves along with them, and joins them as they seek answers to so many questions.

It seems inconceivable that the population of the United States, the sole remaining superpower and a global beacon of freedom and democracy that makes up less than five percent of the world’s population, is home to some 31 percent of the world’s mass shootings. In addition, while most foreign mass shootings take place in military settings, in America, they mostly take place in schools and civilian workplaces.

There are a great many theories for this terrible crisis, and a number of them are quite compelling.

For one thing, America’s obsession with owning guns, and the absurd loopholes in gun laws, almost certainly play a key role in the plague of gun-related deaths.

As in all other U.S. states, it is prohibited for anyone under the age of 21 to purchase alcohol in the state of Florida. Nor can one buy a handgun.

But the Parkland mass murderer was able to legally buy — as soon as he turned 18 — a semi-automatic rifle, a military-style weapon that can fire dozens of rounds in seconds and has repeatedly been used in past mass shootings.

There is no logical reason why such a weapon should be legal to buy altogether, let alone by a troubled teenager. (The Supreme Court has ruled that the Second Amendment does not give the individual an unfettered right to possess firearms.)

Only five states in the Union have laws that allow family members, guardians or police to ask judges to temporarily strip gun rights from people who show signs of violence.

Florida is one of the states that lacks such a law. The most-recent mass shooter’s mother, classmates and teachers described him at various times as dangerous and threatening. Police had made repeated visits to his home. But barring the filing of actual criminal charges, they had no legal recourse in trying to pry away from him his weapon of mass destruction.

Some gun rights supporters have attempted to shift the conversation away from guns onto that of mental illness. There is no doubt that far more must be done, on many levels, to treat the mentally ill. However, this is hardly the way to do so. For one thing, it is widely expected that this mass shooter — like others before him — will be found mentally competent to stand trial. Equally important, trying to associate violent crimes with mental illness not only paints an extremely inaccurate and unfair portrait of individuals struggling with this illness, it adds to an existing stigma, making it harder for them to get the help they need. The fact remains that the overwhelming majority of individuals with psychotic issues are not violent.

It is imperative that America’s elected officials put the safety of their constituents before the demands of the NRA and other gun groups. It is high time that the web of legal loopholes that make a mockery of existing gun-control laws be replaced with tough, across-the-board regulations. It won’t entirely solve the crisis, but it almost certainly will make a real difference. Semi-automatic rifles should be banned entirely from civilian use, and thorough background checks and extended waiting periods should be mandatory for all gun purchases — including those at gun shows, which in many states are now exempt from running background checks.

At the same time, it is vital that an open and frank discussion is held about America’s obsession with violence in general, and guns in particular. Highly addictive video games, and an entertainment industry that is filled with violence, put all Americans at risk. The “culture of violence” that is so pervasive throughout this land has no place in any civilized society.

There is much that can be done to try to alleviate this plague of gun violence and mass shootings. It requires passion, determination, and a willingness to put the lives of innocent others before politics, and a dangerous fixation with deadly weapons.