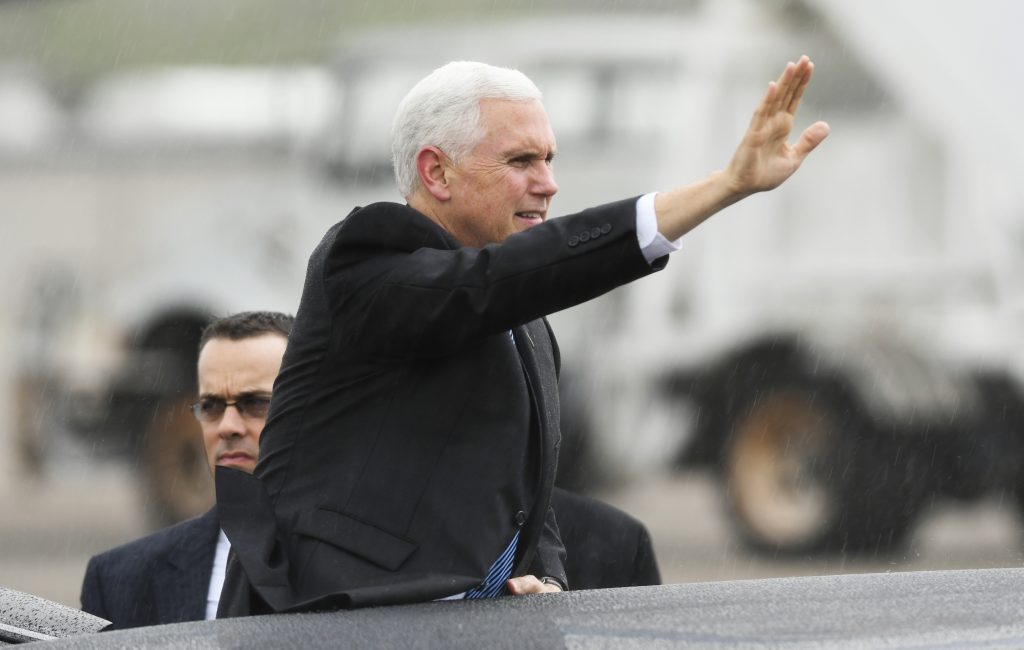 Vice President Mike Pence departed for a five-day, two country swing through Asia earlier this month, having agreed to a secret meeting with North Korean officials while in South Korea at the 2018 Winter Olympic Games.

But on Saturday Feb. 10, less than two hours before Pence and his team were set to meet with Kim Yo Jong, the younger sister of North Korean leader Kim Jong Un, and Kim Yong Nam, the regime’s nominal head of state, the North Koreans pulled out of the scheduled meeting, according to Pence’s office.

The North Korean decision to withdraw from the meeting came after VP Pence had used his trip to denounce their nuclear ambitions and announce the “toughest and most aggressive” sanctions against the regime yet, while also taking steps to further solidify the U.S. alliance with both Japan and South Korea.

It also came as Kim Jong Un, through his sister, invited South Korean President Moon Jae-in to Pyongyang to begin talks “soon” – a development that would likely cause consternation in Washington, where the Trump administration has been leading a campaign to put “maximum pressure” on the Kim regime to give up its nuclear program. Moon said through a spokesman that he would try to make it happen.

VP Pence’s actions and rhetoric in the lead up to the Olympics contrasted with the image of progress being promoted by the South Koreans, who would also have been eager to involve the United States in direct talks with the North.

The vice president’s office promoted his trip as an effort to combat what it said was North Korea’s plan to use the Winter Games for propaganda purposes and portrayed the cancellation of the meeting as evidence his mission was a success.

“North Korea dangled a meeting in hopes of the Vice President softening his message, which would have ceded the world stage for their propaganda during the Olympics,” said Nick Ayers, the vice president’s chief of staff, while also pointing to the specific events Pence held to highlight human rights abuses by Pyongyang. “North Korea would have strongly preferred the vice president not use the world stage to call attention to those absolute facts or to display our strong alliance with those committed to the maximum pressure campaign. But as we’ve said from day one about the trip: this administration will stand in the way of Kim’s desire to whitewash their murderous regime with nice photo ops at the Olympics.”

The vice president’s office said the North Koreans expressed their dissatisfaction with VP Pence’s announcement of new sanctions as well as his meeting with North Korean defectors when canceling the meeting.

The meeting – which VP Pence had coyly teased en route to Asia, saying “We’ll see what happens” – was two weeks in the making, and started when the Central Intelligence Agency first got word that the North Koreans wanted to meet with Pence when he was on the Korean Peninsula, according to a senior White House official. A second official said the initiative for the meeting came from South Korea, who acted as an intermediary between the two sides to set up the meeting.

South Korean officials did not immediately respond to a request for comment on Tuesday.

Though VP Pence had agreed to the North Korean invitation before he departed for Asia on Monday Feb. 5, no details were set until the vice president arrived in Seoul on Thursday Feb. 8, according to the White House official.

The two sides agreed to meet at South Korea’s Blue House early that Saturday afternoon, the official said. No South Korean officials were scheduled to attend, but the Blue House was to serve as a neutral meeting place, which could also accommodate the security demands of both sides.

Within the White House, discussions of the possible meeting were kept to a small group of senior administration officials and the plan was finalized the Friday before the vice president left during an Oval Office meeting with President Donald Trump, VP Pence, national security adviser H.R. McMaster, White House Chief of Staff John Kelly and Ayers. CIA Director Mike Pompeo called in by phone, while Defense Secretary Jim Mattis and Secretary of State Rex Tillerson were also part of the ongoing discussions.

The president and vice president were in agreement on the goal of the meeting: Pence would privately meet with the North Koreans not to open any negotiations with Kim’s regime, but to deliver the administration’s tough stance against North Korea face-to-face, two White House officials said.

The administration also took it as a sign of the North Korean’s seriousness that Kim sent his younger sister to South Korea, making her the first member of the Kim family to visit the South since the Korean War.

“The president’s view was that they need to understand that what our policy is publicly and what we are saying publicly is actually what we mean,” a senior White House official said, explaining Pres. Trump’s decision to greenlight the possibility of a Pence meeting with the North Koreans.

White House officials said Pres. Trump and VP Pence had viewed the meeting as a continuation of the administration’s maximum pressure campaign against North Korea, as well as in line with the message Pence had delivered, publicly and privately, throughout the trip. The talks between Pence and the North Koreans, had they happened, were not intended to serve as any sort of de-escalation of the administration’s stance against North Korea, a senior White House official said.

VP Pence used his trip to the region to further underscore the administration’s combative stance.

At the Olympic opening ceremony, VP Pence sat in South Korean President Moon Jae-in’s VIP box along with Moon and Japanese Prime Minister Shinzo Abe – with Kim Yo Jong and Kim Yong Nam sitting almost directly behind him. Pence studiously ignored the North Koreans all evening and photos of the uncomfortable tableau prompted public headlines and private speculation about who, exactly, had won the propaganda war.

That Friday, before heading to the Olympics, VP Pence visited the Cheonan Memorial, a tribute to 46 South Korean sailors who were killed in 2010 by a North Korean torpedo, and he met with four North Korean defectors, urging them to share their stories before the assembled media. He also invited Fred Warmbier – father of Otto Warmbier, the American student who died last year after North Korea detained him for 17 months for stealing a propaganda poster, then sent him home in a coma – to attend the opening ceremony as his guest.

It was all part of VP Pence’s effort to cast himself as a warrior against North Korea’s propaganda.

VP Pence seemed to make a point of ignoring the North Koreans at the opening ceremony, both at a VIP reception and in Moon’s VIP box. The vice president also only stood to cheer for the U.S. athletes when they marched out, staying seated when the North and South entered the Olympic Stadium together under a united Korean flag.

The North’s state-run Korean Central News Agency unleashed a torrent of vitriol against the Vice President on Saturday. “Pence must know that his frantic acts of abusing the sacred Olympics for confrontational ruckus are as foolish and stupid an act as sweeping the sea with a broom,” the agency said in a report.

“If Pence wants to avoid experiencing a hot agony of shame on the stage of the Olympics, he had better stop behaving imprudently and clearly learn about how ardently the compatriots of the north and the south of Korea wish to reunify the country . . . and quietly disappear,” the report continued.

VP Pence’s stony demeanor and ramrod straight posture at the opening ceremony earned snarky reviews in the Korean media, with some grousing that he had snubbed the North Koreans and even disrespected the Olympic Games.

Communications Director Jarrod Agen tweeted a laudatory review of Pence’s evening: “VP stands and cheers for U.S. athletes. VP hangs out with U.S. athletes instead of dining with Kim regime. VP does not applauded N. Korea or exchange pleasantries w/ the most oppressive regime on earth.”

Another member of VP Pence’s staff explained the vice president’s public behavior with, “I don’t think you talk geopolitics over speed skating.”

In fact, at that very moment, VP Pence was still planning to talk geopolitics with the North Koreans the next day, reiterating his week-long public message in private with Kim Yo Jong and Kim Yong Nam.

On the morning of Saturday Feb. 10, the North Koreans sent word to VP Pence’s team that the meeting was still on – but they didn’t like his rhetoric, a senior administration said.

Then, just hours later, the North Koreans changed their minds, abruptly backing out of their offering of a meeting.