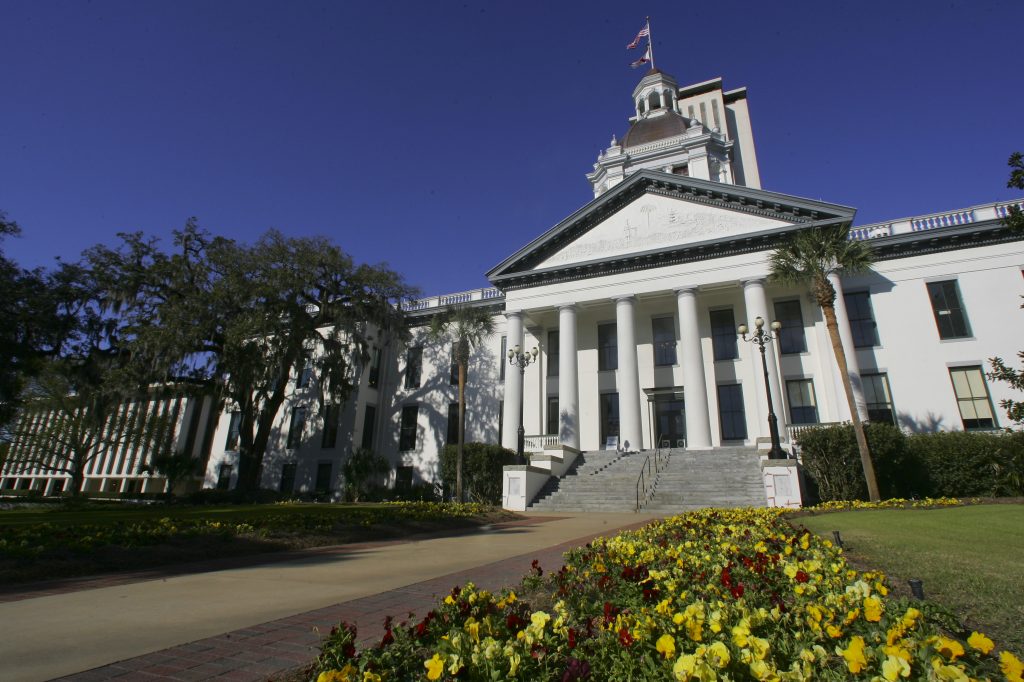 Students who survived the shooting at Stoneman Douglas High School began a 400-mile journey to Florida’s capital Tuesday to urge lawmakers to prevent a repeat of the massacre that killed 17 students and faculty last week.

Three buses carrying 100 students set out from Coral Springs for Tallahassee after they were swarmed by dozens of reporters and cameras. The students, many wearing burgundy T-shirts in their school colors, carried sleeping bags, pillows and luggage and hugged their parents as they departed.

Alfonso Calderon, a 16-year-old junior, said he hopes that the trip begins a conversation between the Legislature, Gov. Rick Scott and the students over commonsense laws on guns.

“America is a gun society. That is what made (suspect) Nikolas Cruz seem normal. It is not normal for someone to have a stockpile of weapons in their room when they are mentally ill,” Calderon said.

The students plan to hold a rally Wednesday to put pressure on the state’s Republican-controlled Legislature to consider a package of gun-control laws, something some GOP lawmakers said Monday they would consider.

“I really think they are going to hear us out,” said Chris Grady, a 19-year-old senior who is going on the trip.

The Feb. 14 attack seemed to overcome the resistance of some in the state’s leadership, which has rebuffed gun restrictions since Republicans took control of both the governor’s office and the Legislature in 1999. However, there is still strong resistance by many in the party to any gun-control measures, leaving the fate of new restrictions unclear.

Students have also vowed to exert pressure on Congress.

Sen. Bill Galvano, a Republican and the incoming Florida Senate president, said the state Senate was preparing a package that would include raising the age to purchase any firearm to 21, creating a waiting period for purchasing any type of firearm, banning bump stocks that can allow semi-automatic guns to spray bullets quickly and creating gun violence restraining orders.

But their push to restrict guns might be a difficult task. Florida has a reputation for expanding — and not restricting — gun rights. Negron sponsored a 2011 bill that Republican Gov. Rick Scott signed into law that banned cities and counties from regulating gun and ammunition sales.

Authorities said suspect Cruz, 19, had a string of run-ins with school authorities that ended with his expulsion. Police also were repeatedly called to his house throughout his childhood. Cruz’s lawyers said there were many warning signs that he was mentally unstable and potentially violent. Yet he legally purchased a semi-automatic rifle.

The Senate is also considering boosting spending on mental health programs for schools and giving law enforcement greater power to hold someone considered a danger to themselves against their will. The body will also look at a proposal to deputize a teacher or someone else at school so they are authorized to have a gun.

Galvano said senators want to examine ways to protect schools that do not have resource officers — often armed law enforcement officers — on site.

State House leaders and the governor also are considering possible changes to firearms rules but have not given any details. Scott planned meetings Tuesday on school safety, and said he would announce proposals on mental health issues later in the week.

Still, some Republicans questioned whether additional gun restrictions are the answer.

Referring to gun-control advocates, he said: “Sometimes I wish they were right, that this would fix it, but it won’t … We have a terrible problem with obesity, but we’re not banning forks and spoons.”

Democrats believe raising the age limit and creating a waiting period to buy rifles is not enough.

Cruz legally purchased at least seven long guns, including an AK-47-style rifle he bought less than a month ago, a law enforcement official said Monday. The official is familiar with the investigation but is not authorized to discuss it and spoke on condition of anonymity.

Federal law allows those 18 and over to buy rifles, and Cruz passed background checks.

Since the attack, students from the school have become increasingly vocal in their demands for gun-control measures. Many have pointed out politicians who take financial support from the National Rifle Association, and some have lashed out at President Donald Trump, saying he was busy blaming Democrats for failing to pass gun restrictions while taking no action of his own.

Pres. Trump said Monday that he was supportive of a bipartisan effort to strengthen federal background checks for gun purchases.