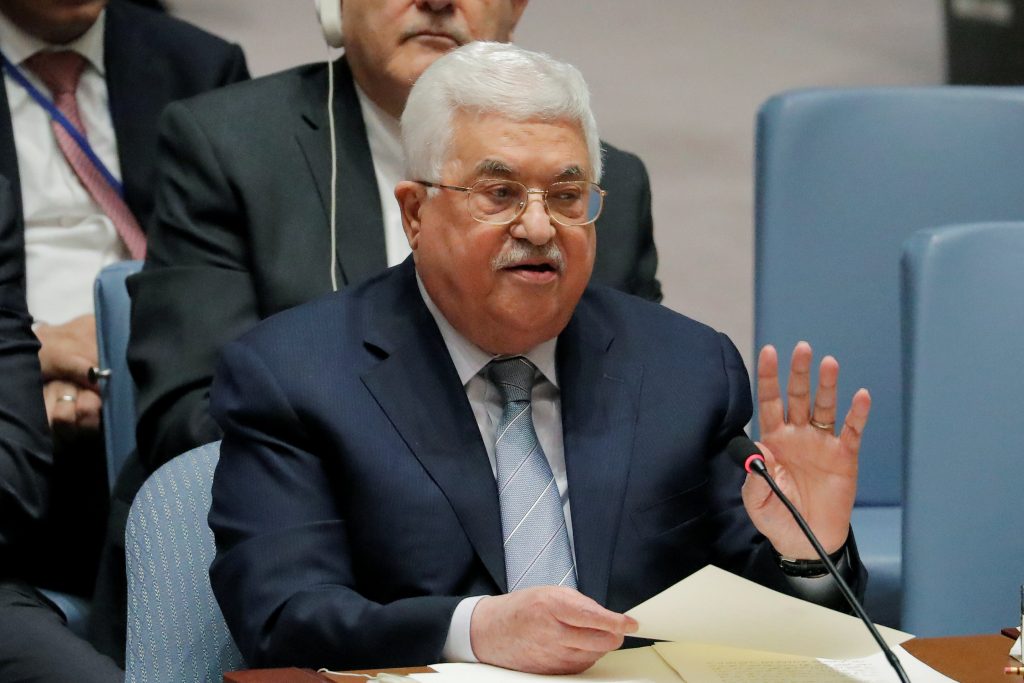 Palestinian Authority President Mahmoud Abbas called for an international Middle East peace conference to be convened by the middle of this year, during a rare address to the United Nations Security Council on Tuesday.

The Palestinians no longer view Washington as a neutral negotiator and have been seeking a collective approach to try and broker Middle East peace. They are furious at U.S. President Donald Trump’s recognition of Yerushalayim as Israel’s capital in December and cut to U.S. funding for the U.N. agency that helps Palestinian refugees (UNRWA).

In a session devoted to the Mideast problem, Abbas blamed the “deadlock” in the peace process on the Trump declaration and Israeli building in Yehudah and Shomron. However, he denied that unilateral recognition of an independent Palestinian state would undermine negotiations.

He called on Security Council members who do not recognize such a state to do so. Israel has objected to such an approach on grounds that it violates agreements the PA has signed with Israel, and that only direct talks will lead to peace.

Abbas claimed that the Palestinians have no problems with Jews or Judaism, only the “occupiers of their land.” To back up his constituents’ claim to the land, he told the Security Council that “we are the descendants of the Canaanites that lived in the land 5,000 years ago and continued to live there to this day.”

Nikki Haley, U.S. ambassador to the U.N., prefaced her remarks with a blunt reply to Palestinian Negotiator Saeb Erekat, who earlier this month called her “impudent” and told her to “shut up” following a speech in which she delivered a scathing attack on Abbas for his failure to genuinely seek peace.

Referring to Abbas’ snub of her and the Israeli delegation by leaving the chamber before they could reply to him, Haley said, “I’m sorry that he declined to stay in the chamber to hear remarks of others. We welcome you as the leader of the Palestinian people here today.”

“But I will decline the advice I was recently given by your top negotiator, Saeb Erekat. I will not shut up. Rather, I will respectfully speak some hard truths.”

She urged the Palestinians to “put aside” their anger over the U.S. recognition of Yerushalayim as Israel’s capital, and noting the presence of negotiators Jared Kushner and Jason Greenblatt behind her, said Washington is ready to broker peace talks immediately.

But, she said, “we will not chase after you. The choice is yours.”

Haley criticized member states for “using the most democratic country in the Middle East as a scapegoat for the region’s problems.” Israelis have suffered due to the conflict, with many dying in stabbings, shootings and suicide bombings, she said.

Palestinians are also suffering, with those in Gaza having to live under Hamas’ rule.

“When we extend a hand, Abbas extends a fist,” he said.

U.N. Secretary General Antonio Guterres addressed the Council, saying the Israeli–Palestinian conflict has gone on for “far too long.”

U.S. President Donald Trump’s special adviser Jared Kushner attended the session at which Abbas spoke. Kushner is in charge of the Israeli-Palestinian portfolio in the Trump administration.