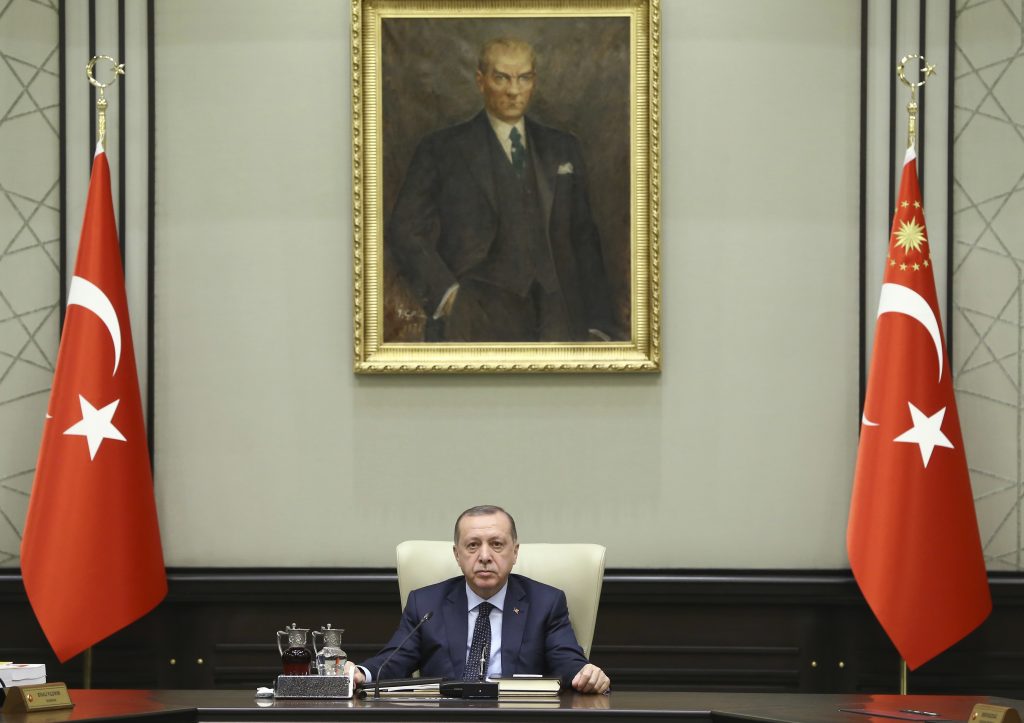 Turkey warned the Syrian government Monday against entering the Kurdish-controlled enclave in northern Syria where a major Turkish military offensive is underway, saying it would hit back at the troops if their goal is to protect the Kurdish fighters.

The warning sets up a potential clash between Turkish troops and Syrian government forces backed by Russia and Iran, whose deployment would be a first step toward restoring President Bashar Assad’s presence along the border with Turkey.

The warning by the Turkish foreign minister came shortly after Syrian state media said pro-government forces would enter Afrin “within hours” to “bolster” local forces in confronting Turkey’s “aggression” after reaching an agreement with the Kurdish militia known as the People’s Protection Units, or YPG, which controls Afrin.

Details of the deal were not announced by either side, and Kurdish officials said talks were still underway. By nightfall, no troops had entered Afrin.

Assad’s troops have had no presence in Afrin since they pulled out of most of northern Syria in 2012, as nation-wide protests against Assad transformed into a civil war. A return to the area, where a potent mix of regional and international powers have boots on the ground, could further complicate the situation and lead to unwanted confrontations.

But depending on the details of the agreement, it may also serve to defuse the situation in Afrin, where Turkey has been struggling to achieve results in its now monthlong offensive to push back YPG fighters from its borders.

Ankara considers the YPG a “terrorist group” linked to the Kurdish insurgency within Turkey’s borders. On Jan. 20, it launched a major air and ground offensive, pounding the enclave with airstrikes and artillery on a daily basis.

Turkey’s foreign minister, speaking at a news conference in Amman, Jordan, said Turkey would have no problem if Syrian government forces were entering Afrin to clear the area from YPG fighters, but that it would strike back if it turns out the deployment was meant to shore up the Kurds against Turkey.

“If the regime is entering to protect the YPG, then no one can stop us, stop Turkey or the Turkish soldiers,” Mevlut Cavusoglu said.

Turkey has supported rebels fighting to overthrow Assad throughout the seven-year civil war, but in recent years has focused more on trying to contain the Kurds. Government troops deployed along its borders, at this point, may be more palatable for Ankara than the continued presence of the powerful YPG.

The group has received weapons and training from the U.S. for years and has been Washington’s main partner in the war against the Islamic State terrorist group in Syria.

It was not clear who, exactly, would enter Afrin. Syria’s state-run news agency, SANA, said pro-government fighters known as “popular forces” would deploy to the area.

“The popular forces joining the resistance against Turkish occupation in Afrin comes in the framework of supporting residents as well as defending Syria and its sovereignty,” SANA said. It added that the deployment aims to “frustrate attempts by Erdogan’s regime and its mercenaries of terrorist organizations to occupy the area,” referring to Turkish-backed Syrian insurgents.

A Syrian Kurdish official told The Associated Press that the Syrian forces will enter Afrin from the Shiite villages of Nubul and Zahraa in Aleppo province.

“The army will deploy in several border areas in coordination with the People’s Protection Units and the Syrian Democratic Forces,” said the official, who spoke on condition of anonymity because he was not authorized to reveal details of the agreement.

“The army will set up military positions in the border area and the agreement is that the Syrian army and the YPG will defend Syria together,” the official said.

The Syrian Democratic Forces are a U.S.-allied group led by the YPG that has won a series of major victories against the Islamic State terrorist group in Syria.

The Syrian government and Kurdish fighters have clashed on occasion, and Assad technically opposes the Kurds’ demands for autonomy. But they have also indirectly worked together in the past, and Turkey represents a common enemy.

Turkish officials said President Recep Tayyip Erdogan held a telephone conversation with his Russian counterpart, Vladimir Putin, during which the two discussed Turkey’s military offensive in Afrin. The Turkish officials detailed the call on condition of anonymity in line with government regulations, and did not mention an agreement for government troops to enter Afrin.

Turkish troops and allied Syrian opposition fighters meanwhile continued to pound villages in the enclave with artillery, according to the Britain-based Syrian Observatory for Human Rights and Syria’s state media.

The Observatory said Monday’s shelling by Turkish troops killed three people, including a child, and that others were wounded.

Turkey’s private Haberturk newspaper said the Syrian government forces were expected to deploy to four locations in the next two days and 52 locations within the week. The paper claimed that under the deal, the YPG had agreed to hand over heavy weapons it holds. The paper did not provide a source for the report.

The Kurdish official told the AP that the reports about the YPG handing over their weapons are “totally untrue.”

Elsewhere in Syria, government shelling of the rebel-held eastern suburbs of Damascus killed at least 30 people, according to opposition activists and paramedics.

The besieged region known as eastern Ghouta has been subjected to weekslong bombardment that has killed and wounded hundreds of people. Opposition activists say government forces have brought in reinforcements in preparation for a wide offensive on the last main rebel stronghold near the capital.