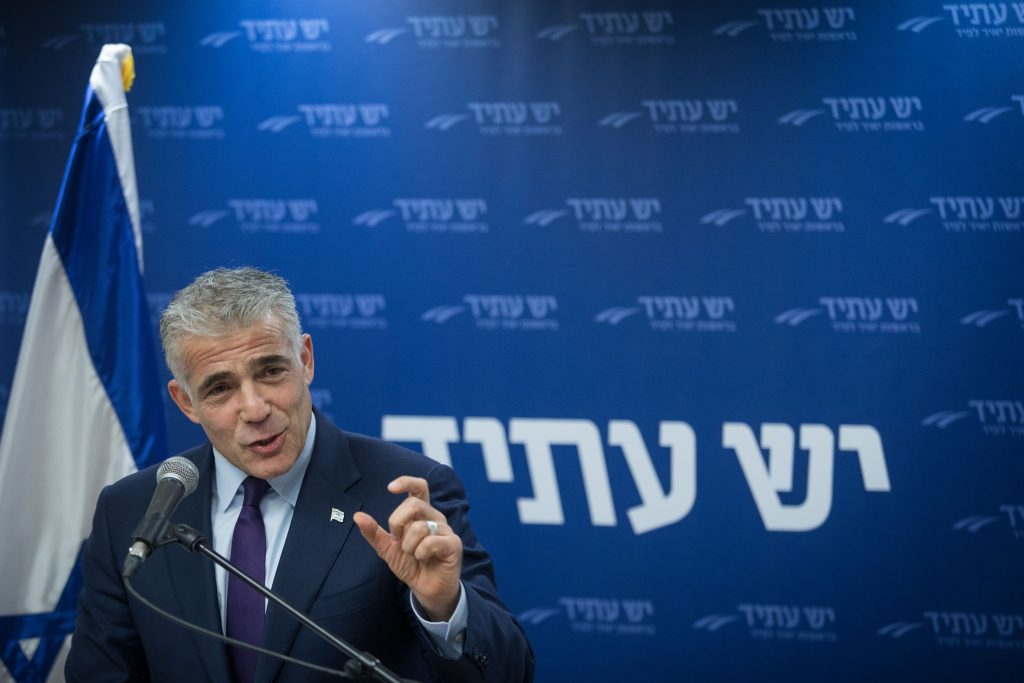 Yesh Atid chairman Yair Lapid, who has been demanding Prime Minister Binyamin Netanyahu’s resignation, shifted gears on Monday, proposing instead that he merely “step aside” long enough to organize his legal defense, the Times of Israel reported.

While Israeli law does not require a prime minister to vacate the office until or unless he is actually convicted of a crime, Lapid’s argument is that given the multiplicity of charges against him, he cannot realistically expect to lead the country and fight his legal battles at the same time.

Speaking to a delegation of the Conference of Presidents of Major Jewish Organizations in Yerushalayim, and later at his party’s faction meeting, Lapid suggested that the PM take a temporary leave of absence until the cases are “resolved.”

“We don’t even have to go to elections; they can put in somebody as temporary prime minister from Likud as has been done before, until this is resolved,” Lapid said.

“Being the prime minister of Israel is an incredibly difficult job, maybe the second hardest in the world after the American president, and you need to be a hundred percent in it. We need a prime minister who is focused on this,” added PM Netanyahu’s longtime rival and a leading candidate for prime minister himself.

The law was invoked when Ariel Sharon suffered a stroke in January 2006 and Ehud Olmert became acting prime minister. It is something of an innovation to suggest that it be used for a legal timeout.

Meanwhile on Monday, another center-left candidate for prime minister took a swipe at Lapid.

Labor Party chairman Avi Gabbay told the Jerusalem Post that Lapid was also at fault for being too cozy with millionaire Arnon Milchan, sitting with him to discuss tax breaks when Lapid was finance minister.

“We need to replace not only Netanyahu but also the ways of Netanyahu,” Gabbay said. “Lapid dealt with issues connected to his friend instead of excusing himself due to a conflict of interest. When I was environment minister, I told my staff in our first meeting that anyone who claims they are my friend or relative should be treated by the book. Rich people should not have more access to the government.”

Lapid subsequently dismissed Gabbay’s comment as “ridiculous” and that this kind of “political spin” would not help him.

“It is unfortunate that Labor is not picking a side in the struggle against corruption,” Lapid said. “The finance minister always meets people who can help the economy, and anyone who tells you different is just trying to sling mud. No one knew at the time that Milchan was giving one million shekels to the prime minister.”