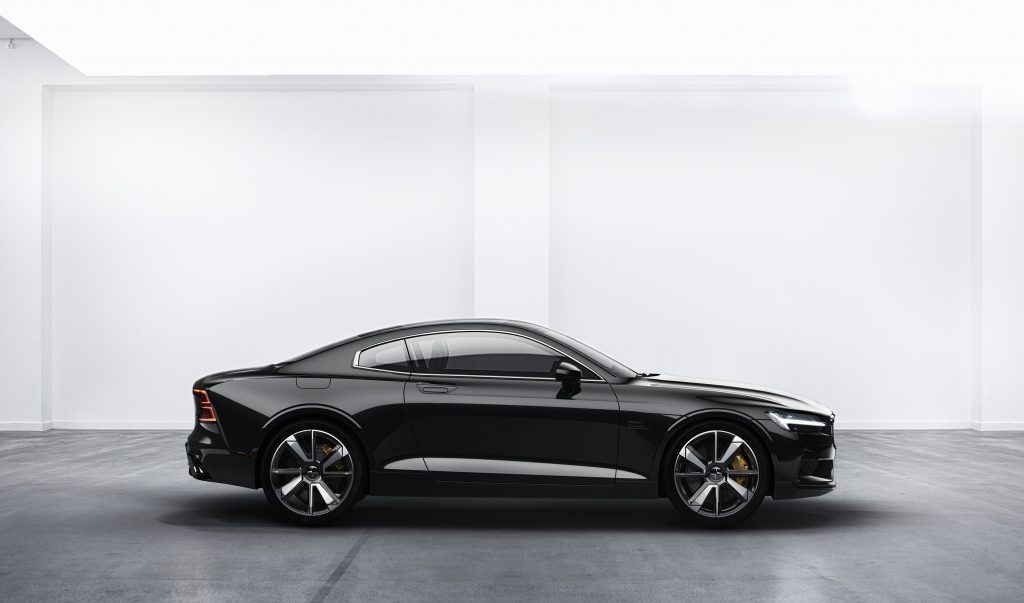 Volvo’s new Polestar brand for high-performance electric vehicles is racing toward the start of public sales, with its first car — a 600-horsepower plug-in hybrid — debuting shortly and two more all-electric vehicles in the works.

The brand expects to be selling the luxury coupe at standalone dealerships in major cities around the world in 2019, communications director J.P. Canton, Polestar’s first — and so far only — U.S. employee, told me.

The brand is moving at a breakneck pace, preparing to unveil the Polestar1 luxury coupe at the Geneva auto show in Switzerland March 6 while its new assembly plant rises in Chengdu, China.

The Polestar1 will have a range of about 93 miles on batteries alone. In all-electric mode, it’s a rear-wheel drive car, with an electric motor powering each of the back wheels.

For longer trips and when more traction is needed, a 2.0-liter gasoline engine linked to the front wheels supplements the batteries, giving the Polestar1 all-wheel drive. In addition to its total of 600 hp in “power” mode, the combination of gasoline and electric power produces 738 pound-feet of torque, more than the 2019 Chevrolet Corvette ZR1’s supercharged 6.2L V8 engine.

“The electric-vehicle world must have true driver’s cars. None exist yet,” Canton said.

In addition to beastly power, the Polestar1 will have a 48/52 front to rear weight distribution, a balance commonly found in Ferraris and other supercars. Body panels made largely of carbon fiber contribute to a low center of gravity, while an adaptive suspension and torque-vectoring electric rear axle take the Polestar1’s spec sheet to an extraordinary level of sophistication.

Most electric vehicles are fast in a straight line. The Polestar1 may be the first one to combine that benefit with exotic-car materials and components for a total performance package.

Polestar plans to build just 1,500 of the cars over three years. Canton expects the production run to sell out fast when the company starts taking deposits shortly.

The next two models will be purely electric, powered by batteries alone but without the 1’s far-out power and price.

“They’ll be performance-oriented versions of non-sports cars,” Canton said. Like Toyota’s Lexus luxury brand, other future Polestar vehicles may be built alongside Volvos in other plants, but they’ll retain unique looks and branding.

Polestar2 is a midsize sedan that should be in production before the end of 2019. It will be the brand’s least expensive vehicle.

Polestar 3 is an SUV, larger than either of the cars, and priced between them.

“The parts of the brand consumers don’t see … like engineering and production, will rely on Volvo,” Canton said.

Polestar is an entirely new brand, with its own dealerships, which will be called “Polestar Spaces.” While it’s owned by Volvo and shares Volvo technology, distribution and more, the name “Volvo” won’t appear anywhere on its vehicles. Polestar will also continue to engineer and put its badge on performance versions of some of Volvo’s regular models, as it did when the company was an independent racing and engineering house before Volvo purchased it in 2015.

Like Volvo’s new XC40 compact SUV, the Polestar will be available for a no-haggle two- or three-year subscription fee than includes insurance and service.

Polestar’s new technology isn’t limited to performance features. A smartphone app can replace the key fob, or allow the driver to hand the car off for service pickup and delivery. Owners can also have accessories, such as bike racks or luggage carriers, delivered and installed on the car for short-term use.

Polestar1 at a Glance

Rear-drive in all-electric mode; all-wheel-drive in hybrid and performance modes