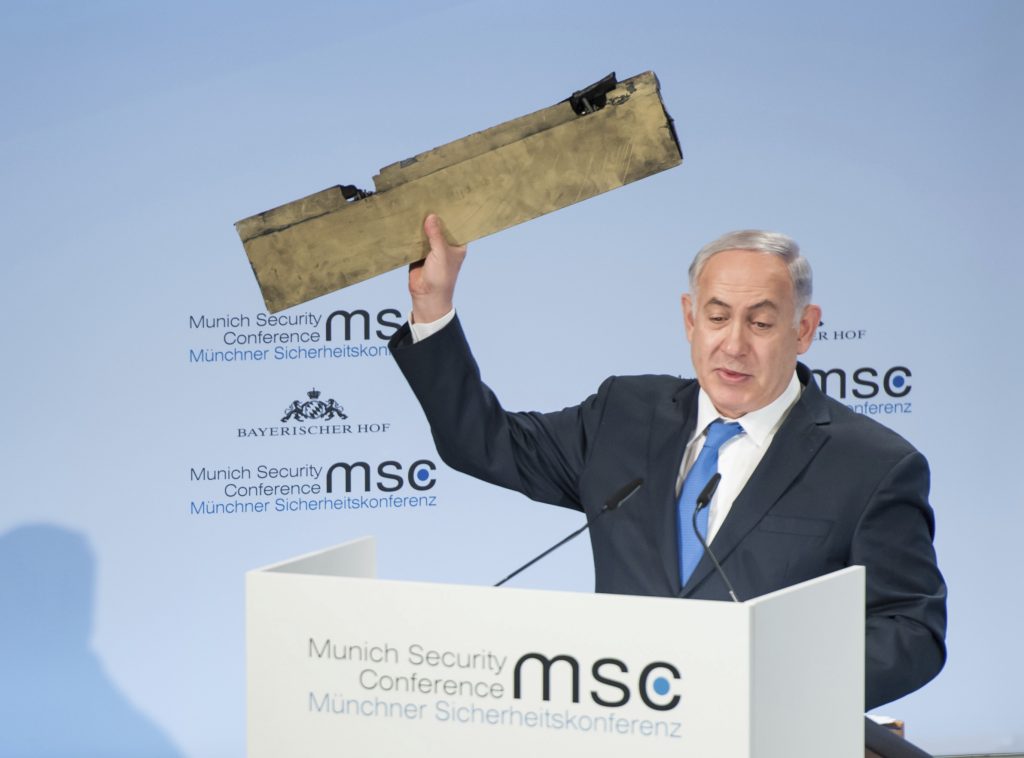 Prime Minister Binyamin Netanyahu said on Sunday that Israel would act against Iran, not just its allies in the Middle East, if needed, reiterating his country’s position that Tehran was the world’s greatest threat.

As tensions increase in the Middle East over Iran’s role in Syria and Yemen and as President Donald Trump presses for a tougher approach on Tehran, Israel is seeking wider support to contain its regional nemesis.

Saying Iran’s “brazenness hit new highs,” he held up a fragment of what he said was an Iranian drone shot down last week by Israel in Israeli airspace and challenged Iranian Foreign Minister Mohammad Javad Zarif.

Netanyahu said, “Mr. Zarif, do you recognize this? You should; it’s yours. You can take back with you a message to the tyrants of Tehran — do not test Israel’s resolve!”

In his first address to the annual Munich event, which draws security and defense officials and diplomats from across Europe and the United States, Netanyahu urged his audience to counter Iran immediately, displaying a map showing what he said was Iran’s growing presence in the Middle East.

For its part, Iran pushed back. Foreign Minister Mohammad Javad Zarif, who also addressed the conference, called Netanyahu’s presentation “a cartoonish circus, which does not even deserve a response.”

Zarif accused the United States of using the conference to “revive hysteria” against Iran, and denied that Tehran was seeking “hegemony” in the Middle East.

But Netanyahu said Iran was increasing its power as a U.S.-led coalition against the Islamic State terror group in Iraq and Syria was regaining territory from militants.

“The unfortunate thing is that as ISIS compresses and Iran moves in, it is trying to establish this continuous empire surrounding the Middle East from the south in Yemen but also trying to create a land bridge from Iran to Iraq, Syria, Lebanon and Gaza,” Netanyahu said.

“This is a very dangerous development for our region.”

Among Israel’s main concerns is Lebanon, where the heavily armed Iran-backed Shiite militia Hezbollah is part of a coalition government. Israel last fought a war against Hezbollah in 2006. Tension between Israel and Lebanon has increased, including over a maritime border dispute.

Lebanon’s Defense Minister, Yacoub Riad Sarraf, who spoke after Netanyahu, said: “Watch out, we will defend ourselves … we also have friends.”

Tensions in the region surged on Feb. 10 when anti-aircraft fire downed an Israeli warplane returning from a bombing raid on Iran-backed positions in Syria.

Mr. Netanyahu also reiterated his view, shared by President Trump, that world powers needed to scrap or rewrite the 2015 nuclear accord with Tehran that curbs Iran’s nuclear weapons ambitions in return for economic sanctions’ relief.

“It’s time to stop them now,” Mr. Netanyahu said, without specifying any military action. “They’re aggressive, they are developing ballistic missiles, they’re not inspecting, they have a free highway to massive [uranium] enrichment,” he said of the fuel needed for nuclear weapons.

Mr. Netanyahu likened it to the infamous 1938 “Munich Agreement” that Western powers signed with Adolf Hitler in an attempt to stave off war in Europe.

The concessions to Hitler only emboldened the Nazi regime,” he said. “Rather than choosing a path that might have prevented war … those well-intentioned leaders made a wider war inevitable and far more costly.”

France, Britain, Germany, Russia and China, which signed the nuclear deal along with Iran and the United States, say the accord cannot be reopened, that it is working and that Iran is allowing inspections.

Russian senator Aleksey Pushkov said that scrapping the agreement was akin to choosing between war and peace, while John Kerry, the former U.S. secretary of state who helped clinch the agreement, said it was wrong to assume that Iran would obtain a nuclear weapon as soon as the 15-year scope of the deal ends.