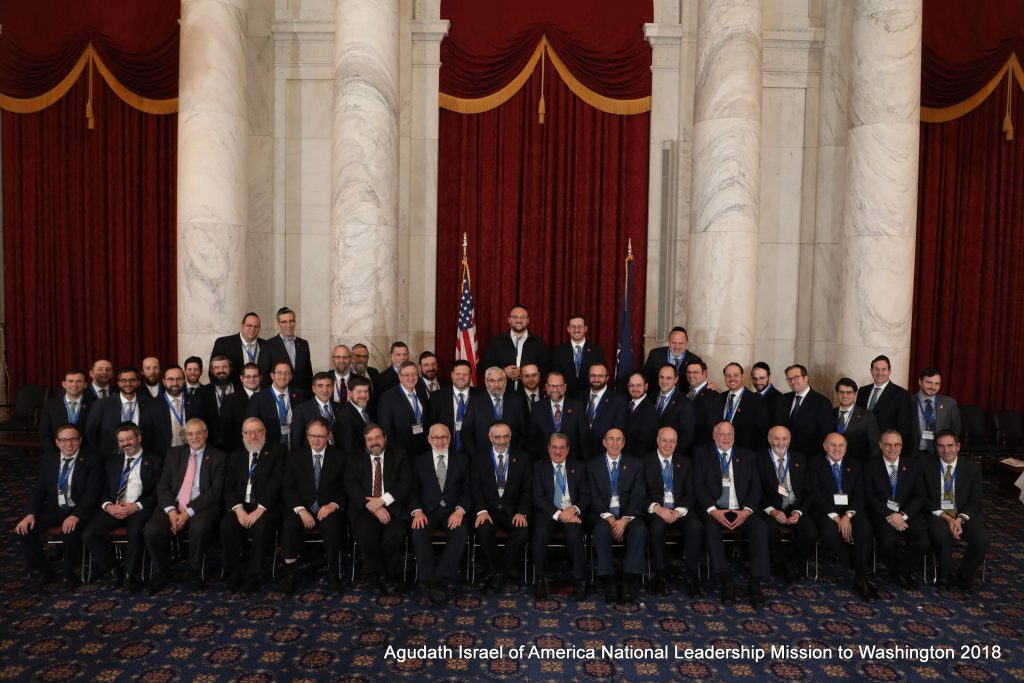 The Agudah pilgrimage to our nation’s capital is a longstanding tradition that dates back well over four decades, giving elected officials an opportunity to truly understand and appreciate the Agudah’s constituency, while providing participants with a firsthand look at how the Agudah’s advocacy and relationships at the federal level benefit the Jewish community.

The mission started at 6 PM on February 13th with a dinner meeting at the Senate’s Russell Office Building in the legendary Kennedy Caucus Room, chaired by Agudah chairman of the board Shlomo Werdiger. After being introduced by Agudah board of trustees member Chaskel Bennett, Senator Ted Cruz (R-TX) spoke warmly about his strong commitment to the State of Israel, religious freedoms and school choice. Agudah Executive Vice President Rabbi Chaim Dovid Zwiebel presented Senator Cruz with an inscribed biography of longtime Agudah president Rabbi Moshe Sherer, z”l.

A luncheon session chaired by Rabbi Zwiebel at the Senate’s Russell Office Building had participants listening to senators on both sides of the aisle, including Senators John Boozman (R-AR), Benjamin Cardin (D-MD), Kirsten Gillibrand (D-NY), Orrin Hatch, (R-UT), Charles Schumer(D-NY), Jim Risch (R-ID), Pat Toomey (R-PA) and Ron Wyden (D-OR). The luncheon also included a special presentation to Senator Hatch, the longest-serving Republican in the Senate who will be retiring at the end of the year, and a staunch ally of the Agudah, whose efforts played a major role in the Chanukah release of Sholom Mordechai Rubashkin. Senator Hatch was presented with a leather Tehillim and received a standing ovation from the Agudah delegation.

In addition to discussing topics of major importance to the Jewish community, including school choice funding, Israeli security, anti-Semitism, the BDS movement, Iran’s nuclear capabilities, religious liberties, grants and immigration, numerous speakers showered the Agudah with praise for its continued efforts to advocate for members of the Jewish community. Several elected officials noted that it was extremely meaningful to see that participants traveled to Washington from California, Colorado, Florida, Illinois, Maryland, Michigan, New York, New Jersey, Ohio, Tennessee and Texas to take part in the mission and were grateful for the opportunity to meet with them.

While the leadership mission focused on furthering several important agenda items at the federal level, it also showcased the Agudah’s continued efforts on behalf of the Jewish community.

“Our purpose is to work with people in positions of power and develop relationships with them,” explained Rabbi Zwiebel. “Baruch Hashem, missions like these have allowed us to achieve some very tangible results. Bringing people with us to Washington gives them the ability to see how this process works and how much the Agudah has been able to accomplish. We are honored to be able to play a part of presenting the community’s voice to our government leaders.”