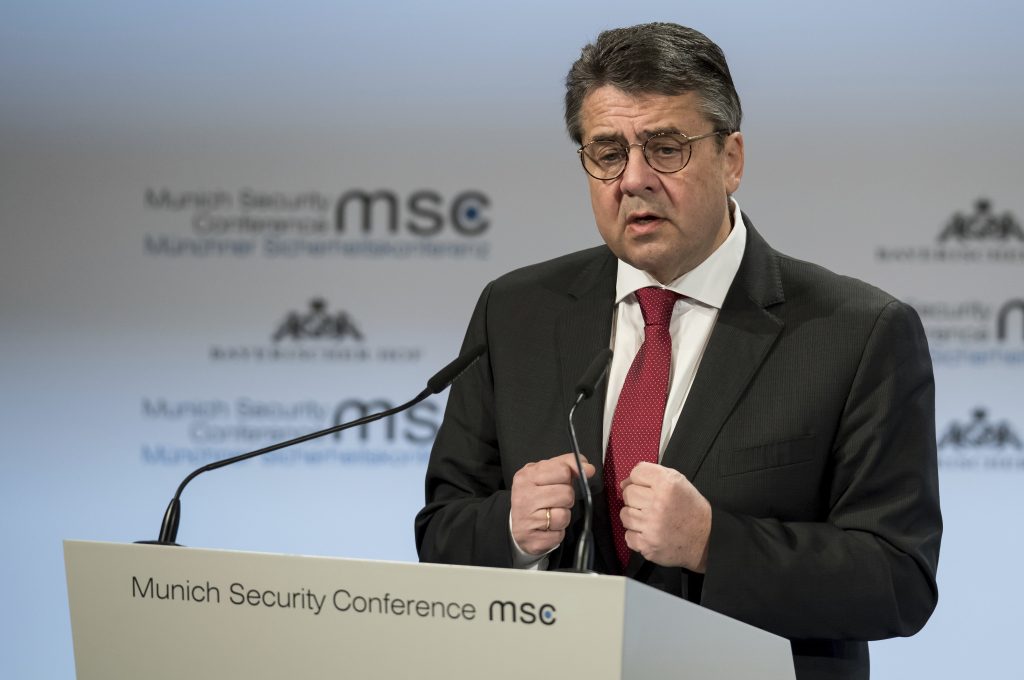 Germany’s foreign minister slammed the “America first” approach of President Donald Trump’s administration Saturday, saying that close U.S. ties with a strong European Union are as much in Washington’s interest as they are in Europe’s.

German Foreign Minister Sigmar Gabriel told world leaders and defense officials at the Munich Security Conference that with the United States no longer the only indisputable superpower, it makes sense for Washington to count on traditional partners in Europe for help.

At the same time, Gabriel said, it is also clear that European nations need the U.S. if they want to “shape the future and not just endure.”

“Our strength in Europe is not sufficient for this. Neither the EU nor the U.S. can go it alone. We have to count on our friends and our partners,” he said.

Trump’s national security adviser, H.R. McMaster, met one-on-one with Gabriel after his speech. McMaster reassured the forum that the United States still is strongly committed to its traditional alliances, but emphasized that “we must all share responsibility.”

“International peace and prosperity depends on all nations,” McMaster said. “For this reason, President Trump has called for stronger alliances and partnerships based on shared values, shared interests, shared responsibilities and shared burdens.”

Trump has pushed strongly for more NATO nations to live up to commitments to spend at least 2 percent of their gross domestic product on defense spending.

Polish Prime Minister Mateusz Morawiecki, whose country is one of the five NATO members that does meet the target, said discussing a common European defense policy with other nations is complicated when they are not playing by the same rules.

He said it’s not appropriate to “have those free riders who live under pax Americana but pretend to be self-sufficient in the context of security.”

He added that, following Russian aggression in recent years against Georgia and Ukraine, Europe needs “more steel tanks and not only think tanks.”

No country in Europe has benefited as much from American help as Germany since World War II, Gabriel said. He said the country “eagerly learned” principles of democracy, multilateralism, international law and free trade from the relationship with the U.S.

“Maybe this can explain why we Germans in particular are so perturbed when we look across the Atlantic — because we no longer recognize our America,” he said. “Is it deeds, is it words, is it tweets we should look at to measure America?”

He urged a return to greater joint cooperation, saying now is not the time for “just pursuing individual national interests.”

Gabriel suggested the U.S. was going in the opposite direction, drifting toward approaches taken from powers like China and Russia who are “constantly trying to test or undermine” the EU.

“It is one thing from possible rivals or competitors, but from our friends and partners we expect that they will respect the unity of the EU,” he said. “No one should try to divide the EU, not Russia, not China, but also not the United States.”

In a meeting on the sidelines of the conference Friday, U.S. Secretary of Defense James Mattis told French Defense Minister Florence Parly that a “strong Europe is a better security partner” but emphasized that EU defense initiatives should “complement, not compete with NATO,” the U.S. Defense Department said.

Parly said during an address at the conference Friday that worries about EU defense being in “opposition to NATO” were a “false debate”.

Gabriel said there was a need for European nations to work more effectively together so the EU has both the tools and a common strategy to effectively assert its interests globally. He said that while Europe can’t rest simply on a military strategy, it also can’t ignore military and defense spending.

“As the only vegetarian, we would have a problem in the world of carnivores,” he said.