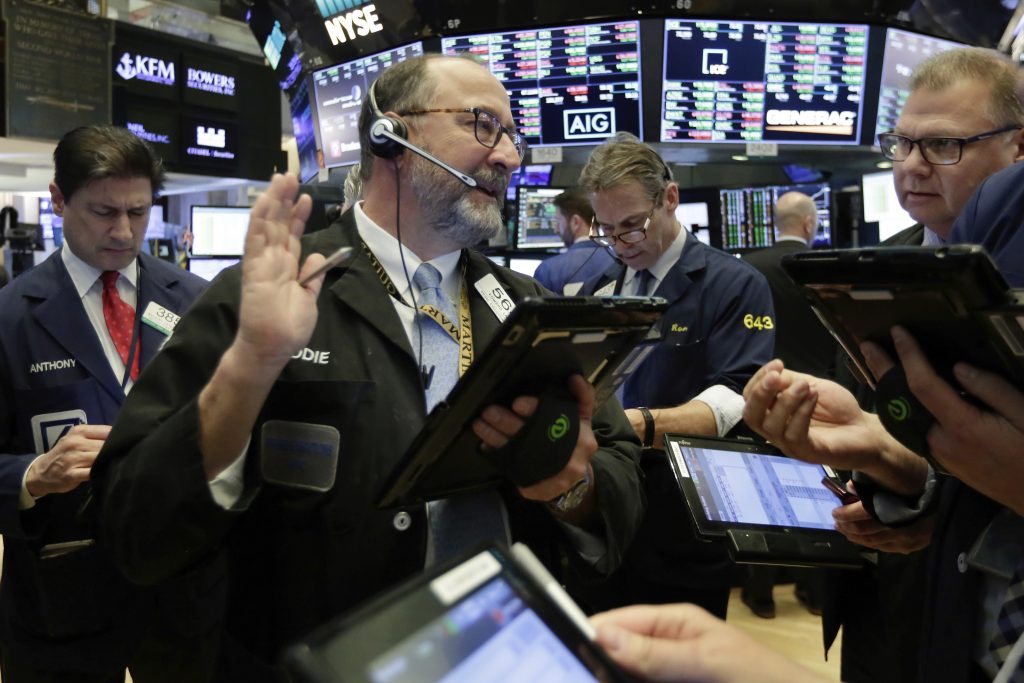 Technology companies are leading stocks higher Thursday, putting the market on track for its fifth gain in a row. Apple and Cisco were among the big winners in tech, while industrial companies including Boeing also rose. Energy companies continued to struggle. The gains helped erase part of the steep losses the market suffered over the past two weeks.

Despite the gains over the past week, the S&P 500 is still 5.3 percent below the record high it set on Jan. 26. Trading volumes have returned to more typical levels this week. They spiked in the first two weeks of February as stock indexes took some wild swings.

LEADERS: Technology bellwether Cisco reported a bigger profit and better sales than analysts expected, and it also said it continued to win more subscriptions in its fiscal second quarter. It also said it will buy back another $25 billion of its own stock. Cisco climbed $1.90, or 4.5 percent, to $43.99.

Apple also chipped in. The stock rose $5.52, or 3.3 percent, to $172.89 after an analyst for Morgan Stanley said the iPhone X is gaining market share in China, a critical market for Apple’s products.

BUFFET BETS ON TEVA: Warren Buffett’s Berkshire Hathaway disclosed an investment in struggling Teva Pharmaceutical Industries. Teva said in December that it would eliminate one-fourth of its jobs as it deals with falling generic drug prices, the loss of patent protection on its multiple sclerosis drug Copaxone and $30 billion in debt from its acquisition of Allergan’s generics business. On Thursday the stock climbed $1.53, or 7.9 percent, to $20.86. Two years ago it was worth more than $55 a share.

ENERGY: U.S. crude oil turned higher in afternoon trading after a slump in the morning. It rose 74 cents, or 1.2 percent, to $61.34 a barrel in New York. Brent crude, used to price international oils, lost 3 cents to $64.33 a barrel in London.

Energy stocks were the only sector to decline in afternoon trading. They’ve done far worse than any other part of the market lately: of the 32 energy companies in the S&P 500, only four are currently higher than they were at the start of the year. Baker Hughes is down 17 percent while Exxon is down 9 percent and Chevron is down 11 percent.

WATCHING PRICES: U.S. wholesale prices rose 0.4 percent in January, the biggest increase since November. Rising prices can be a signal that inflation is increasing, but that didn’t concern investors very much on Thursday. The main reason for the increase in prices was a big jump in energy prices, but they have dropped recently. U.S. crude oil peaked at $66 a barrel in late January and is trading around $60 a barrel now.

The recent slump in the stock market started after the Labor Department said workers’ pay climbed in January. Investors worried that that means inflation is gaining steam, and that the Federal Reserve will start raising interest rates faster than previously anticipated to keep that inflation in check.

BOUNCING BACK: The market’s recent moves might look familiar because investors have been “buying on the dips” for years. The last significant drop in the market prior to this month came in June 2016, after the United Kingdom voted to leave the European Union. The S&P 500 fell more than 5 percent in just two days, then gained it back almost as quickly.

BONDS: Bond prices rose. The yield on the 10-year Treasury note remained around four-year highs as it declined to 2.89 percent from 2.91 percent. That was its highest mark in four years.