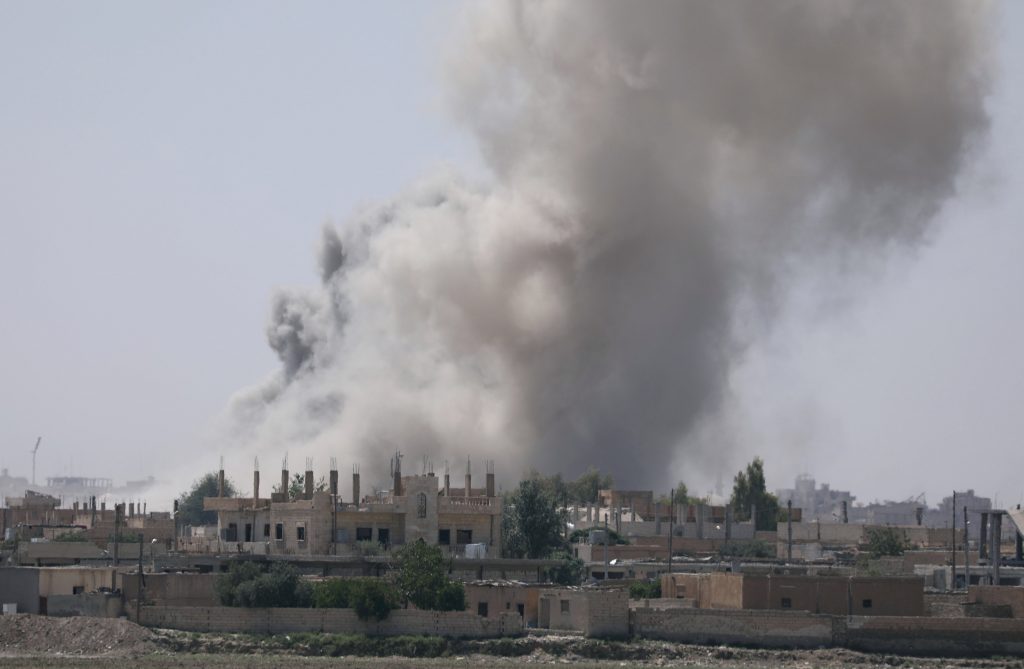 An American detained by U.S. forces was carrying thumb drives containing files on how to make bombs plus administrative spreadsheets describing work he did for the Islamic State terror group at the time he surrendered in Syria last year, according to documents the U.S. government filed in federal court.

The government’s justification for holding the detainee without charge, contained in more than 150 pages filed late Wednesday, is loaded with details about the still-unidentified man, who is married and has a 3-year-old daughter. Yet it raises more questions about why he was in Syria. He has told U.S. authorities that he was kidnapped and imprisoned by IS and had press credentials to do freelance writing about the conflict.

The case has sparked debate about the government’s legal right to hold enemy combatants linked with IS under congressionally approved war powers written after the Sept. 11 attacks as well as the constitutional rights afforded every American citizen.

The government’s court filing provides a detailed itinerary of the detainee’s travels across the world, including Saudi Arabia, Bahrain, Turkey and Syria — and the United States where he went to college in Louisiana.

The associate also said that in about 2005 or 2006, the detainee lived briefly in Covington, Louisiana. After an argument with friends about not repaying money he owed them, the detainee left Louisiana and returned to Saudi Arabia — he has dual citizenship there.

According to the government, the detainee signed up to be an IS fighter in 2014 during a visit to Syria, attended one of the terrorist’s training camps and later worked various jobs, including distributing vehicles to members of IS and guarding an oil field under IS control.

The detainee was captured around Sept. 11, 2017, by U.S.-backed Syrian Democratic Forces at a checkpoint. He said he had been walking for two days. The SDF said all the land within two days’ walk of the screening checkpoint was controlled by IS.

The detainee identified himself as “Daesh,” which is another name for IS, and told the SDF “that he wanted to turn himself in and speak to the Americans,” the court filing said. The SDF took him into custody and handed him over to U.S. forces.

The filing says that when he surrendered, he was carrying $4,200 and a global positioning device. The thumb drives also contained information about how to interrogate captives as well as other how-to manuals for an IS member, according to the government. He also had clothes, hats, a Koran and a scuba snorkel and mask.

In making a case for holding him as an enemy combatant, the government said the detainee’s name and other biographical details as well as information labeling him as an IS member were found on another thumb drive. That drive, which contains what appear to be intake forms for new IS recruits, was recovered by local Syrian forces in July 2015. The Defense Department obtained that thumb drive in November 2015. The detainee’s intake form says he joined IS in July 2014 in Jarabulus, Syria, a town that IS captured in mid-2013.

U.S. officials have been investigating the detainee trying to find out why he traveled to IS-controlled territory in Syria and determine whether he should be charged in federal court — possibly for allegedly providing material support of terrorism — or continued to be held as an enemy combatant. The government is considering one other option: handing him over to another country, perhaps Saudi Arabia because of his dual citizenship.

The government has claimed the right to detain him under war powers Congress passed after 9/11 in the fight against the Taliban and al-Qaida, the 2002 congressional authorization for the war in Iraq, and presidential power to imprison Americans indefinitely for national security reasons.

The American Civil Liberties Union, which is representing the detainee, argues those war powers don’t apply in the battle against IS. For months, the ACLU has fought the government, first for holding the detainee without giving him access to a lawyer and now for continuing to hold him without charge.

“The bottom line is that the government is holding him illegally,” said ACLU attorney Jonathan Hafetz. “He has a right to be charged with a crime consistent with the Constitution. If the government wants to continue to detain him, they should charge him with a crime.”

The government said the detainee claims he had $40,000 with him when he entered Syria in January 2015 with the help of a smuggler. The detainee “claimed that he intended to enter Syria to be a freelance writer and that he obtained press credentials.” It’s not clear what organization or news outlet issued the credentials. That is one of many details redacted from the court filing. But the government said the detainee indicated that he used his U.S. passport to obtain credentials from other press organizations as well.

He said he was kidnapped by IS after he arrived in Syria and was imprisoned for seven months until October 2015. He later trained with IS near Mayadin and was sent to the front lines in Deir el-Zour province in Syria. Later, he guarded an oil field. After another stay in IS detention, he spent time working for IS monitoring imams and prayer callers and also civilians working on heavy equipment.

After learning that he had an electrical engineering degree, IS gave him a car to drive to Raqqa, Syria, where he met with terrorists who told him about a special IS project to “use a type of machine, similar to a satellite dish, to transmit microwaves that could bring down an airplane,” the government document said. The detainee declined to work on the project.

He remained in contact with his wife and last spoke with her via phone message in July. He told his sister by text message that everyone was leaving the IS and he was leaving, too. He was captured three weeks later.