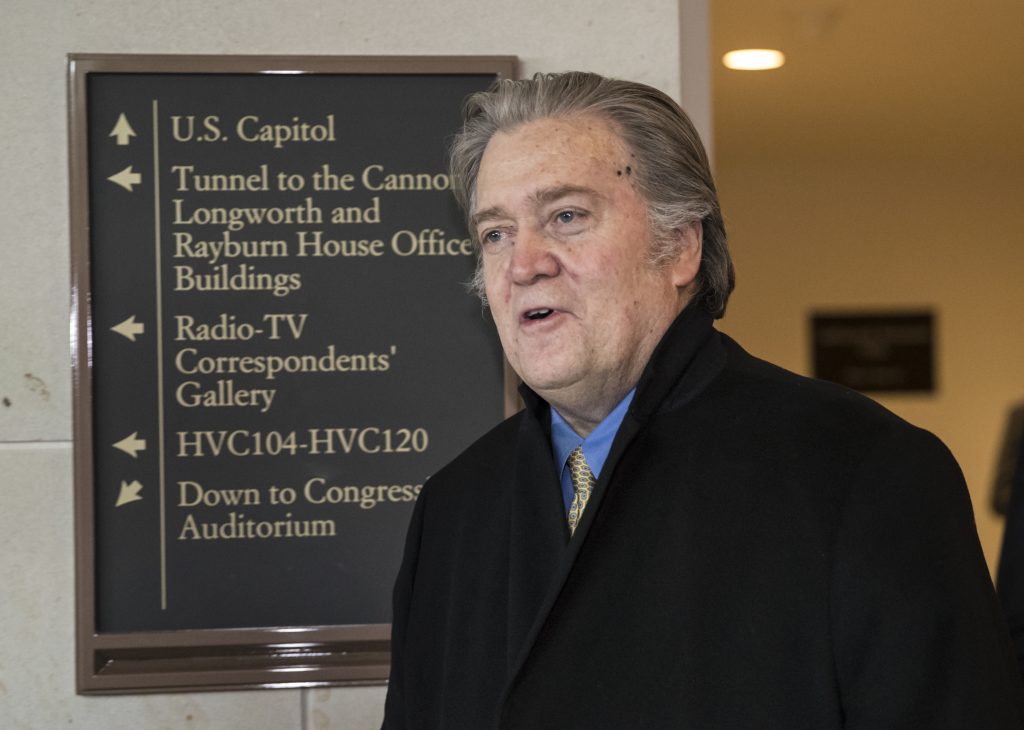 Former White House chief strategist Steve Bannon, whose involvement in the Trump White House and the president’s election campaign make him knowledgeable about matters related to Russian meddling and potential obstruction of an ongoing federal inquiry, was interrogated over two days this week by investigators for special counsel Robert Mueller, according to a person familiar with the process.

The person, who declined to be named because they were not authorized to publicly discuss the investigation, said Bannon answered every question that was put to him.

Bannon’s interview by Mueller’s team came just before he visited Capitol Hill on Thursday to answer questions as part of the House intelligence committee’s own Russia probe. Like his first visit in January, Bannon declined to answer some questions in the closed-door interview — forcing Republican lawmakers to weigh whether to hold him in contempt of Congress.

He would only answer 25 questions that had been pre-approved by the White House in reference to any events after President Donald Trump’s election. His answer to each question was “no” and he told the committee he was not authorized to elaborate, according to lawmakers of both parties.

Bannon was already under subpoena as lawmakers on both sides of the aisle have been critical of the White House’s sweeping interpretation of executive privilege and its contention that pretty much everything is off limits until the president says it’s not.

The escalating fight between Congress and the White House over the privilege issue has centered around Bannon, an outsized figure in President Donald Trump’s campaign and White House and an inspiration to some conservatives as he has publicly battled the Republican establishment. He was fired from the White House last summer, and more recently had a falling out with Mr. Trump after the January publication of a book in which he sharply criticized Trump family members.

Despite his fractured relationship with Mr. Trump, Bannon has followed White House direction as the House lawmakers have sought to talk to him in its probe of Russian meddling in the 2016 election and whether Mr. Trump’s campaign was involved. Because he was one of Mr. Trump’s top advisers, lawmakers were expected to question him about key events during his time in the White House, including Mr. Trump’s firings of former national security adviser Michael Flynn and former FBI Director James Comey.

At issue is whether Bannon can talk about the presidential transition, his time at the White House and communications with Mr. Trump and others since he left last summer. Texas Rep. Mike Conaway, the Republican leading the panel’s Russia probe, said Bannon would only answer the pre-approved questions about any time period past the day Mr. Trump was elected in November 2016.

Conaway wouldn’t say whether Republicans would hold Bannon in contempt. He said he’d discuss the issue with House lawyers and with House Speaker Paul Ryan, who is likely to have the final say in whether the House votes on contempt.

“That’s an ongoing conversation we’ll have among an awful lot of lawyers,” Conaway said after Bannon’s interview.

At least one Republican on the intelligence panel said before the interview that a contempt vote would be necessary if Bannon were uncooperative. Florida Rep. Tom Rooney said Tuesday that if Bannon didn’t cooperate with the panel and they didn’t hold him in contempt, that would set a bad precedent.

“For not just our committee but every committee, that (subpoenas) don’t mean anything, that it’s just a hollow threat,” Rooney said. “You can’t do that.”

Democrats are pushing for a contempt vote, with the top Democrat on the intelligence panel, California Rep. Adam Schiff, saying he believed Bannon’s non-answers were all an attempt to draw out and block the Russia probe.

“That’s not how privilege works, that’s how stonewalling works,” Schiff said. “And we cannot take that kind of stonewalling for an answer.”

This was the second time Bannon appeared before the committee. Republicans and Democrats subpoenaed him after he similarly refused to answer some questions in a January interview. Negotiations between the House and White House have been ongoing since then, and interviews have been scheduled and postponed in recent weeks. Lawmakers headed into the meeting ahead of Bannon’s entrance appeared unsure if he would arrive.

Bannon is one of the committee’s few remaining witnesses in its Russia probe, which Republicans on the panel have said they want to wrap up early this year.

The Senate intelligence committee is running a separate investigation into the Russian meddling. The Senate panel hasn’t yet spoken to Bannon, according to a source familiar with the probe. The person declined to be named because the interview schedule isn’t public.