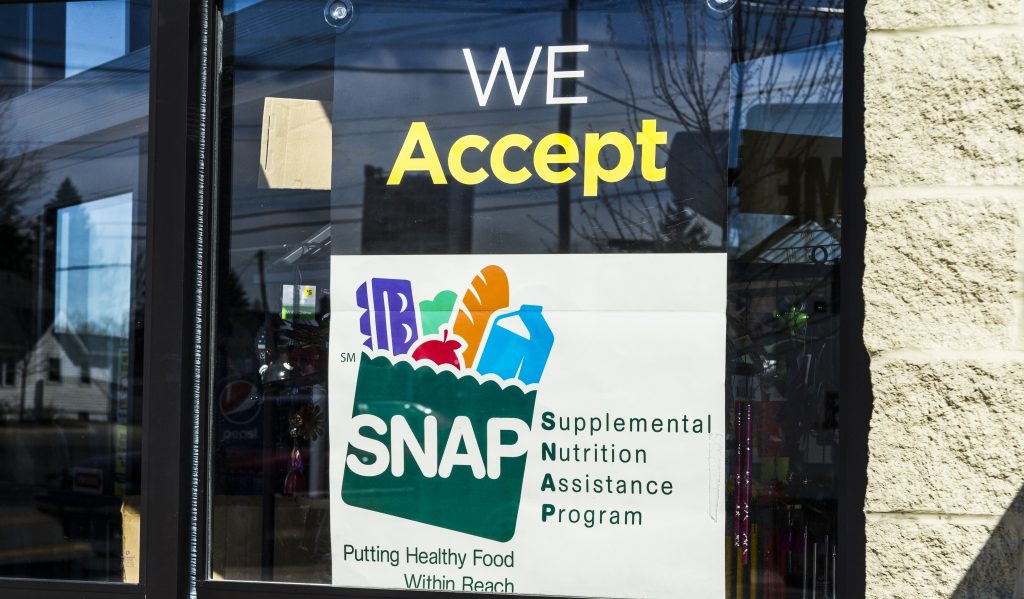 The Trump administration wants to slash food aid to low-income families and make up the difference with a box of canned goods – a change that Office of Management and Budget Director Mick Mulvaney described in a Monday briefing as a “Blue Apron-type program.”

“What we do is propose that for folks who are on food stamps, part – not all, part – of their benefits come in the actual sort of, and I don’t want to steal somebody’s copyright, but a Blue Apron-type program where you actually receive the food instead of receive the cash,” Mulvaney said. “It lowers the cost to us because we can buy [at wholesale prices] whereas they have to buy it at retail. It also makes sure they’re getting nutritious food. So we’re pretty excited about that.”

Mulvaney’s remarks drew raised eyebrows from some critics, who accuse Mulvaney of drawing an unfair comparison between the food-stamp program, which delivers an average of $1.37 per meal to America’s poorest, and a high-end meal kit that runs $10 per serving.

On Monday, the Trump administration proposed cutting food stamps, formally known as the Supplemental Nutrition Assistance Program (SNAP), by $17 billion in 2019 and more than $213 billion over the next decade. The dramatic reductions came as part of a budget proposal that made sweeping, across-the-board cuts to popular safety net programs, including federal housing subsidies and Medicaid.

But the administration’s SNAP proposal was particularly striking, advocates and experts said, because it advocates a fundamental change to the program’s administration. For the past 40 years, the Department of Agriculture has distributed benefits as either paper coupons or virtual disbursements on Electronic Benefit Transfer cards, allowing recipients to use them as cash on foods of their choice, and at their own grocery store.

But under the Trump proposal, which USDA has dubbed “America’s Harvest Box,” all households receiving more than $90 per month in benefits – 81 percent of SNAP households overall – would begin receiving roughly half of their benefits in the form of government-purchased, non-perishable food items.

Those foods would include shelf-stable milk, juice, grains, cereals, pasta, peanut butter, beans and canned meat, fruits and vegetables, according to USDA. The department estimates that it could supply these goods at roughly half the cost of retail, slashing the cost of SNAP while still feeding the hungry.

It is this program that Mulvaney likened to meal-kit delivery service Blue Apron – whose shipments typically include fresh fish, meat and produce – earning the derision of some on social media. A spokeswoman for Blue Apron could not immediately be reached for comment.

“Hearing that the Trump Admin is selling this as the ‘Blue Apron-ing’ of SNAP. Um, no,” tweeted Chad Bolt, a senior policy manager at the progressive group Indivisible.

“With Blue Apron, you get to pick your meals and decide when they come. And it gives you all the ingredients you need to complete it,” echoed New York Times op-ed writer Bryce Covert. “Under Trump’s plan, the government decides what you get and when you get it.”

Many anti-hunger advocates and analysts are equally skeptical of the proposed “food box,” which – if approved – would impact 16.4 million households. They say it’s unclear how USDA would deliver the boxes and how much that would cost. Equally unclear is whether USDA would allot the same foods to, say, an elderly diabetic and a family with young children.

“It boggles the mind how that would play out,” said Kathy Fisher, policy director at Philadelphia’s Coalition Against Hunger. “We know SNAP works now, when people can choose what they need. How they would distribute foods to people with specialized diets, or [to people in] rural areas. . . It’s very expensive and very complicated.”

The proposal is also likely to enrage food retailers – particularly Walmart, Target and Aldi – who stand to lose billions if food stamp benefits are cut, analysts say. On Monday, the Food Marketing Institute, a trade association for grocery stores, condemned the Harvest Box proposal as expensive, inefficient and unlikely to generate any long-term government savings.

Ironically, that sort of criticism has also dogged Blue Apron, which saw its customer base contract in 2017. A recent report by the market research firm Datassential found that four in 10 lapsed meal-kit subscribers dropped their service because it was too costly.

As much as a third of the price per box goes toward shipping and logistics, which remain daunting, industry analysts told The Post last June. Food policy experts expressed skepticism that the government could do better.

In a statement, Jim Weill, president of the Food Research and Action Center, described the proposal as a “a Rube-Goldberg designed system of commodity distribution via food boxes.”

“[It] will be administratively costly, inefficient, stigmatizing, and prone to failure,” Weill added. “[And it] will return the country to Depression-era anti-hunger approaches.”