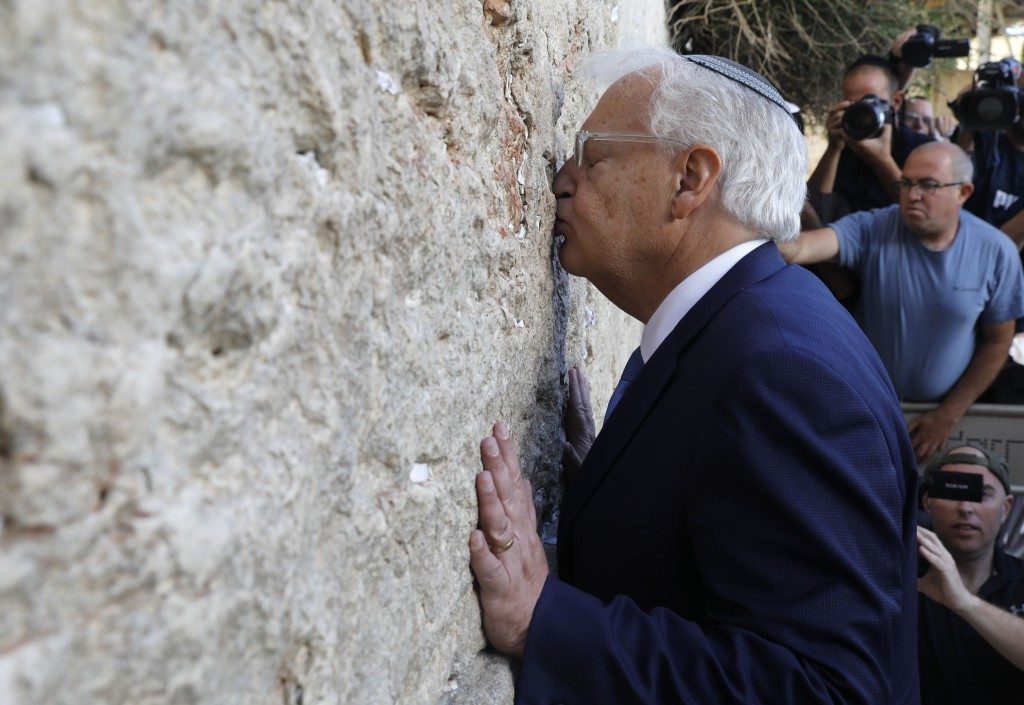 You can tell a lot about a person by the enemies he keeps.

U.S. Ambassador to Israel David Friedman, for example, has antagonized the Palestinians and the extreme left in Israel by expressing truly heartfelt condolences to the families of “settlers” like Rabbi Raziel Shevach and Rabbi Itamar Ben-Gal, Hy”d, who were murdered by terrorists over the past month.

“Perhaps the most difficult task I have as the U.S. ambassador to Israel is that of consoling victims of terror,” he wrote Mrs. Ben-Gal last week. “Once again, my heart breaks as I reach out to a beautiful family that has lost a husband and a father.”

At the heart of the “problem,” as far as the Arabs and the Israeli left are concerned, is that the ambassador — a proud, observant Jew and a long-time supporter of Beit El — stubbornly refuses to view Jewish residents of Yehudah and Shomron as “obstacles to peace.” Instead, he sees them as devoted husbands, fathers and educators and feels the pain of the widows and orphans and students who have been left behind.

“There is no greater contribution in life than the providing for the education and development of the next generation,” he wrote the widow of Rabbi Ben-Gal last week. “By devoting his life to teaching at Yeshiva Bnei Akiva in Givat Shmuel as well as in your hometown of Har Bracha, Rabbi Ben-Gal pursued this mission not as a job, but as a higher calling… Just as Rabbi Ben-Gal dedicated himself to nurturing others, during this terrible time the Government and people of the United States of America are standing with you, your precious family and community.”

Immediately after Rabbi Ben-Gal, 29, was stabbed to death at the entrance to Ariel, a city in the Shomron, the U.S. ambassador shared his personal connection with the young rabbi’s community. “Twenty years ago I gave an ambulance to Har Bracha, hoping it would be used to deliver healthy babies. Instead, a man from Har Bracha was just murdered by a terrorist, leaving behind a wife and four children. Palestinian ‘leaders’ have praised the killer. Praying for the Ben Gal family.”

The response to this sympathy and solidarity wasn’t long in coming. PA chairman Mahmoud Abbas’ spokesman Nabil Abu Rudeineh said that “the statements by the U.S. ambassador lead us to wonder… Does he represent the U.S. or Israel.”

Rudeineh went so far as to blame Mr. Friedman — not the PA’s refusal to halt payments to terrorists — for the “crisis in U.S.-Palestinian relations.”

Gideon Levy, the far-leftist columnist for Haaretz, took offense at the ambassador’s donation of an ambulance to Har Brachah, which he blasphemously dubbed “Har Klalah.”

“His donations represent a political point of view, as well as a moral stance,” Levy wrote, as if there were something morally reprehensible about providing a remote Jewish community with an ambulance. “… With or without Friedman’s ambulance, Har Bracha is actually Har Klalah. It, like its sister settlements, was established just as a poke in the eyes of Palestinians and to prevent a peace agreement.”

The ambassador couldn’t remain silent in the face of such a provocation, whose content and timing evoked justifiable outrage. “What has become of Haaretz,” he rhetorically asked in his social media post. “Four young children are sitting shivah for their murdered father, and this publication calls their community a ‘mountain of curse.’ Have they no decency?”

When the United States, and most especially its point man in Israel, express genuine pain and outrage at the murder of innocent Jews in Yehudah and Shomron, that sends an important message to the terrorists, and their apologists, that Washington will no longer rationalize murder as a symptom of the “occupation.”

And when the United States expresses unequivocal support for Israel’s right to defend itself against Iranian provocations, as it did this weekend when Tehran invaded Israeli air space, that too sends an important message to the world’s leading sponsor of terrorism.

“Israel is our closest security partner in the region and we fully support Israel’s inherent right to defend itself against threats to its territory and its people,” Pentagon spokesman Adrian Rankine-Galloway said. (By contrast, U.N. Secretary-General Antonio Guterres made do with “calls on all to work for an immediate and unconditional de-escalation of violence.”)

To be sure, the previous U.S. administration also condemned terror attacks and Iranian provocations. But the rifts and personal antagonism between then-President Barack Obama and Prime Minister Binyamin Netanyahu left room for Israel’s enemies to read a different message between the lines.

The Trump administration has replaced antagonism with closeness and warmth. It deserves credit and our gratitude not just for saying the right things, but feeling them. A message of friendship toward Israel and the Jewish people that comes from the heart ultimately penetrates what passes for a heart among our enemies.