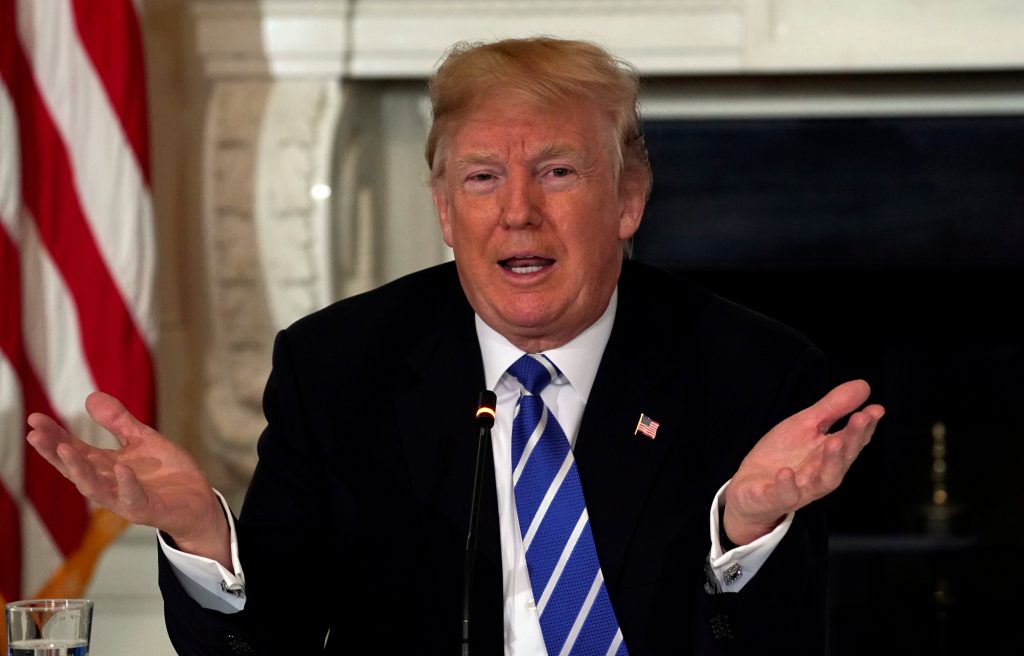 President Donald Trump unveiled a $4.4 trillion budget for next year that heralds an era of $1 trillion-plus federal deficits and — unlike the plan he released last year — never comes close to promising a balanced ledger even after 10 years.

The growing deficits reflect, in great part, the impact of last year’s tax overhaul, which is projected to cause federal tax revenue to drop. And Monday’s budget submission does not yet reflect last week’s two-year bipartisan $300 billion pact that wholly rejects Pres. Trump’s plans to slash domestic agencies.

Tax revenue would plummet by $3.7 trillion over the 2018-27 decade relative to last year’s “baseline” estimates, the budget projects. Pres. Trump is requesting a record $686 billion for the Pentagon, a 13 percent increase from the 2017 budget enacted last May.

The spending spree, along with last year’s tax cuts, has the deficit moving sharply higher with Republicans in control of Washington. Pres. Trump’s plan sees a 2019 deficit of $984 billion, though $1.2 trillion is more plausible after last week’s budget pact and $90 billion worth of disaster aid is tacked on. That’s more than double the 2019 deficit the administration promised last year.

“In one year of working together, we have laid the foundation for a new era of American greatness,” Pres. Trump said in the budget message accompanying his spending document. “America is back to winning again. A great spirit of optimism continues to sweep across our nation.”

The 2019 budget was originally designed to double down on last year’s proposals to slash foreign aid, the Environmental Protection Agency, home heating assistance and other non-defense programs funded by Congress each year.

“A lot of presidents’ budgets are ignored. But I would expect this one to be completely irrelevant and totally ignored,” said Jason Furman, a top economic adviser to President Barack Obama. “In fact, Congress passed a law last week that basically undid the budget before it was even submitted.”

In a preview of Monday’s release, the White House on Sunday focused on Pres. Trump’s $1.5 trillion plan for the nation’s crumbling infrastructure. He also is asking for a $13 billion increase over two years for opioid prevention, treatment and long-term recovery. A request for $23 billion for border security, including $18 billion for a wall along the U.S.-Mexico border and money for more detention beds for detained immigrants, is part of the budget, too.

Pres. Trump would again spare Social Security retirement benefits and Medicare as he promised during the 2016 campaign. And while his plan would reprise last year’s attempt to scuttle the “Obamacare” health law and sharply cut back the Medicaid program for the elderly, poor and disabled, Pres. Trump’s allies on Capitol Hill have signaled there’s no interest in tackling hot-button health issues during an election year.

The budget also endorses a plan by Sens. Lindsey Graham, R-S.C., and Bill Cassidy, R-La. to replace the Obama-era health law with $1.6 trillion in subsidies to states over the coming decade.

“The budget does bend the trajectory down, it does move us back towards balance. It does get us away from trillion-dollar deficits,” Mulvaney said on Fox News.

“Just because this deal was signed does not mean the future is written in stone. We do have a chance still to change the trajectory. And that is what the budget will show tomorrow,” he said.

Last year, Pres. Trump’s budget projected a slight surplus after a decade, but critics said it relied on an enormous accounting gimmick — double counting a 10-year, $2 trillion surge in revenues from the economic benefits of “tax reform.” Now that tax reform has passed, the math trick can’t be used, and the Trump plan doesn’t come close to balancing.

The Trump plan also promises 3 percent growth, continuing low inflation, and low interest yields on U.S. Treasury bills despite a flood of new borrowing, and underestimates the mounting cost of financing the government’s $20 trillion-plus debt. Many economists are likely to find the prospects for such a rosy scenario implausible.

The White House is putting focus this year on Pres. Trump’s long-overdue plan to boost spending on the nation’s crumbling infrastructure. The plan would put up $200 billion in federal money over the next 10 years to leverage $1.5 trillion in infrastructure spending, relying on state and local governments and the private sector to contribute the bulk of the funding.

Critics contend the infrastructure plan will fail to reach its goals without more federal support. Proposals to streamline the permitting process as a way to reduce the cost of projects have already generated opposition from environmental groups.

Martin Crutsinger contributed to this report.