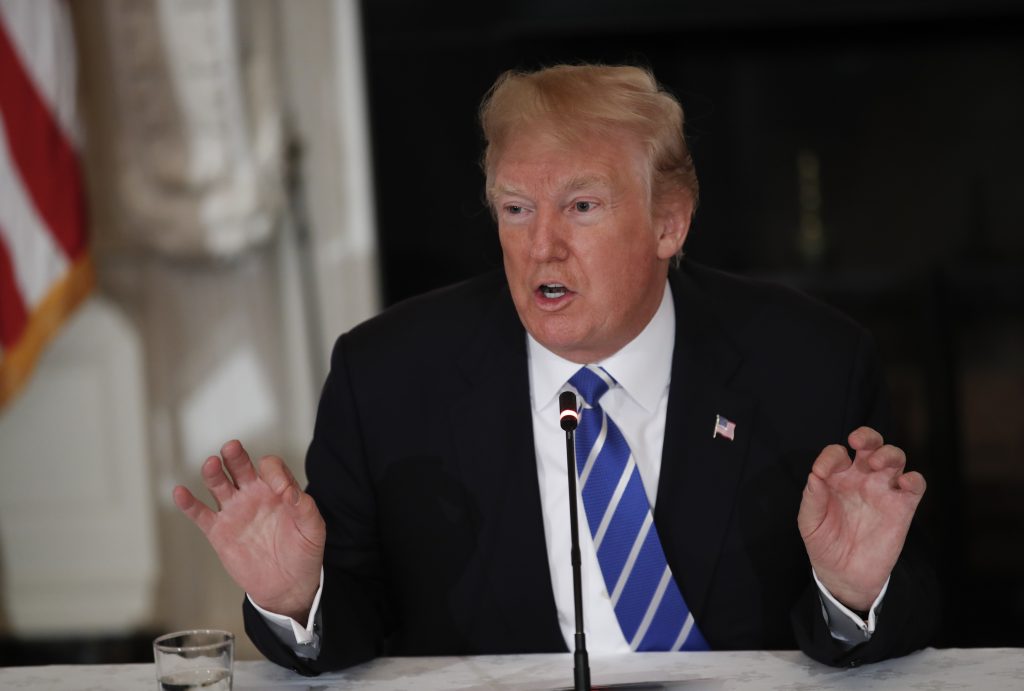 President Donald Trump sent Congress a sweeping plan Monday to rebuild the nation’s depleted roads and bridges — then immediately raised doubts about how committed he was to delivering on that campaign promise.

“If you want it badly, you’re going to get it,” Trump told state and local officials during a meeting at the White House. “And if you don’t want it, that’s OK with me too.”

Trump suggested that his proposal — aimed at spurring $1.5 trillion in spending over a decade — was not as important to him as other recent administration efforts to cut taxes and boost military spending.

Speaking of infrastructure, Trump added: “This is of great importance, but it’s not nearly in that category. Because the states will have to do it themselves if we don’t do it. But I would like to help the states out.”

The administration’s plan is centered on using $200 billion in federal money to leverage more than $1 trillion in local and state tax dollars to fix America’s infrastructure, such as roads, highways, ports and airports. The administration released a 55-page “legislative outline” for lawmakers who will write the legislation.

With the plan heavily dependent on state and local dollars, Democrats warned it would raise tolls on commuters, sell off government-owned infrastructure to Wall Street and eliminate critical environmental protections.

“After a full year of empty boasts, the president has finally unveiled a puny infrastructure scam that fully fails to meet the need in America’s communities,” said House Democratic leader Nancy Pelosi of California.

Convening a roomful of state and local leaders, Trump listened as governors and mayors pitched individual projects in their states and described the challenges involved with gaining federal permits.

“It seems to me that the pyramids in Egypt were built faster than some of the projects that we’re contemplating,” said Esteban Bovo, chairman of the Miami-Dade County Commission in Florida.

Trump vowed repeatedly that the federal permitting process would be streamlined but said it would be up to state and local leaders to ensure that local permits don’t hold up worthy projects.

The proposal features two key components: an injection of funding for new investments and to speed up repairs of crumbling roads and airports, as well as a streamlined permitting process that would reduce the wait time to get projects under way. Officials said the $200 billion in federal support would come from cuts to existing programs.

Half the money would go to grants for transportation, water, flood control, cleanup at some of the country’s most polluted sites and other projects.

States, local governments and other project sponsors could use the grants — which administration officials cast as incentives — to cover no more than 20 percent of the costs. Transit agencies generally count on the federal government for half the cost of major construction projects, and federal dollars can make up as much as 80 percent of some highway projects.

About $50 billion would go toward rural projects — transportation, broadband, water, waste, power, flood management and ports. That is intended to address criticism from some Republican senators that the administration’s initial emphasis on public-private partnerships would do little to help rural, GOP-leaning states.

The remaining federal dollars include: $20 billion for expanded loan programs and private bonds, $20 billion for “transformative projects” that seen as visionary and $10 billion for a capital financing fund and office-building by the federal government.

“This plan recognizes what everyone in America knows firsthand: America’s infrastructure is in disrepair, and it’s long past time we start building again,” said House Majority Leader Kevin McCarthy, R-Calif.