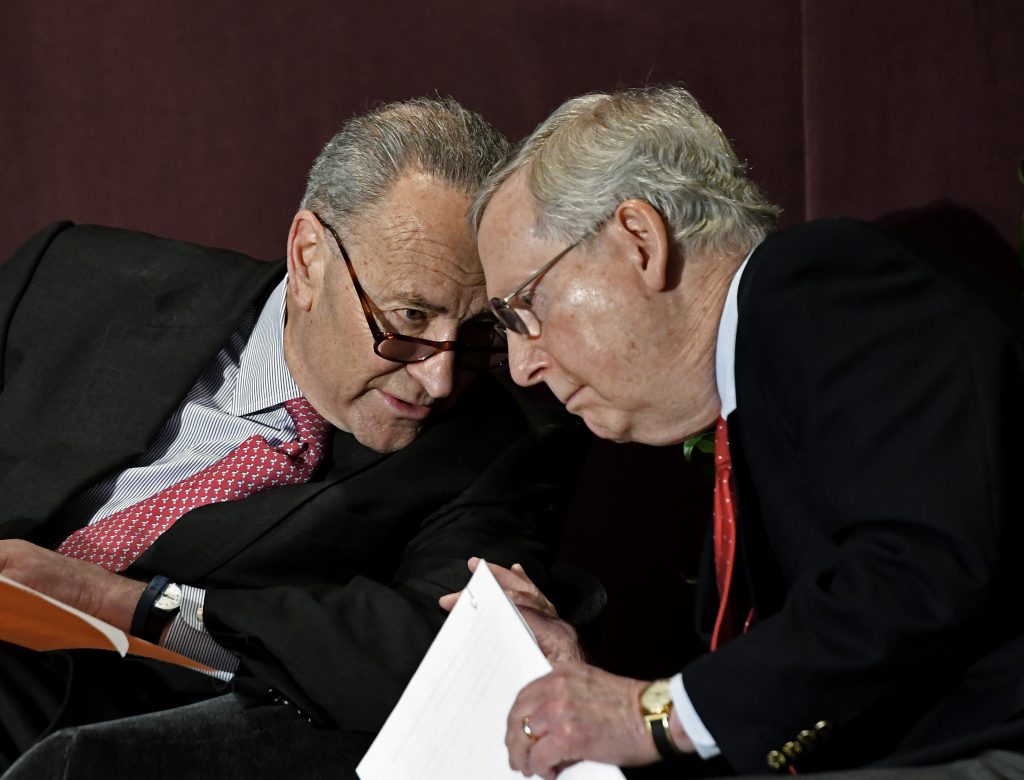 The Senate’s two top leaders put on a show of comradery Monday as their chamber launched its immigration debate, but also laid down markers underscoring how hard it will be to reach a deal that can move through Congress.

“We really do get along, despite what you read in the press,” said Senate Minority Leader Chuck Schumer, D-N.Y., at a previously scheduled appearance alongside his counterpart, Senate Majority Leader Mitch McConnell, R-Ky., at the University of Louisville.

There was even ribbing when Schumer presented McConnell with a bottle of bourbon made in his home New York City borough of Brooklyn. McConnell, whose state knows a thing or two about bourbon, proclaimed, “There’s no such thing as Brooklyn bourbon.”

But just days after the two leaders brokered a bipartisan $400 billion budget agreement and helped shepherd it into law, both men made clear that an immigration agreement will be tough.

“The time for political posturing is behind us,” McConnell said later Monday on the Senate floor. He said while Democrats have called for “swift action” on immigration, “Now’s the time to back up the talk with the hard work of finding a solution.”

That, he pointedly said, would mean passage by the Senate and the House of a measure “which the president will sign.”

McConnell expressed his support for a wide-ranging proposal by President Donald Trump that the Senate is expected to vote on this week. It would pave a path to citizenship for up to 1.8 million young “Dreamer” immigrants in the U.S. illegally, a lure for Democrats that many Republicans oppose.

Trump also wants $25 billion for Trump’s border wall with Mexico and other security measures, as well as curbs on legal immigration — a must for many Republicans. Many Democrats consider some of the proposals, including limiting the relatives that legal immigrants can bring to the U.S., to be non-starters.

In his own remarks on the Senate floor, Schumer expressed opposition to such a sweeping approach.

“The only enemy here is overreach,” Schumer said. “Now is not the time nor the place to reform the entire legal immigration system. Rather, this is the time for a narrow bill” — which Democrats have said would help the Dreamers and provide some money for border security.

The comments came as the Senate voted 97-1 — Ted Cruz, R-Texas, provided the sole “no” vote — to plunge into an open-ended immigration debate that’s been promised by McConnell. Both parties’ leaders hope debate can be concluded this week, but it’s unclear if that will happen or what the product, if any, will be.

“This is going to be done or not done this week,” No. 2 Senate GOP leader John Cornyn of Texas told reporters.

Lawmakers’ focus will be the Dreamers, hundreds of thousands of young immigrants who have lived in the U.S. illegally since being brought here as children.

They had been given temporary protection from deportation by President Barack Obama’s Deferred Action for Childhood Arrivals program, or DACA. Trump has said he’ll end that program March 5, though a federal court has temporarily blocked him from scuttling it.

Trump’s overall immigration plan, opposed by many Democrats, stands little chance of prevailing because any measure will need 60 votes. That means proposals will need substantial bipartisan support since the GOP majority is 51-49, and Sen. John McCain, R-Ariz., has been absent in recent weeks battling cancer.

Highlighting the partisan gap, there was plenty of finger-pointing Monday.

Trump put the onus on Democrats, saying, “I hope the Democrats are not going to use it just as a campaign” issue.

No. 2 Senate Democratic leader Richard Durbin of Illinois said the key impediment to a bipartisan deal was Trump’s history of switching positions on the issue.

“Nailing the president down has been next to impossible,” he said.