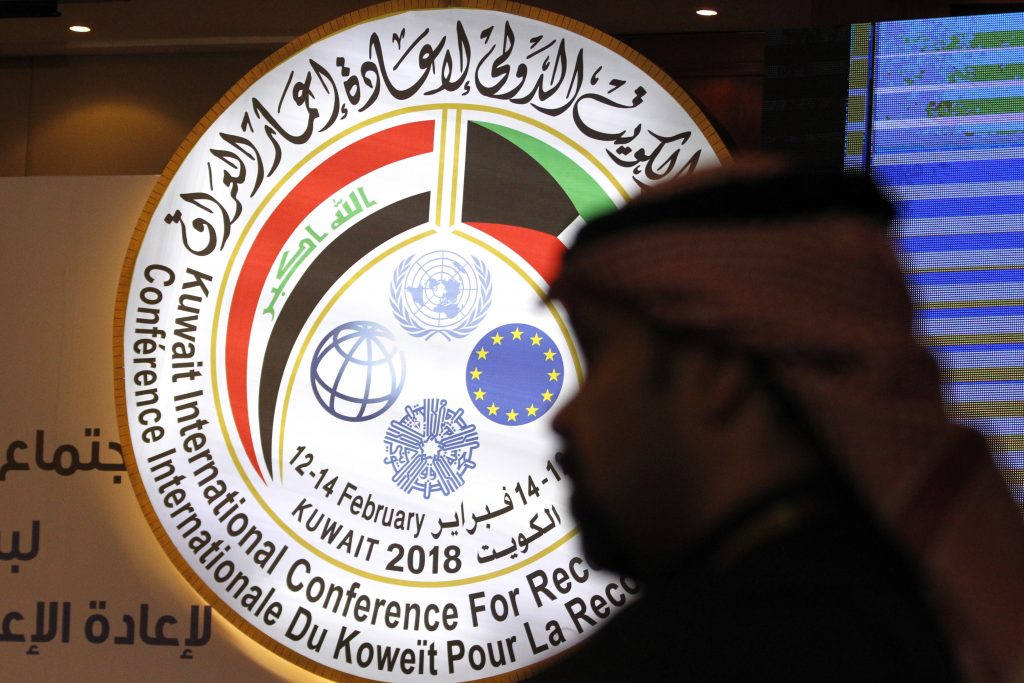 Kuwait on Monday opened a week of conferences seeking aid for rebuilding Iraq after the onslaught of the Islamic State terrorist group, seeking tens of billions of dollars for a nation that invaded it only a generation ago.

Authorities estimate Iraq needs $88.2 billion to restore a country smashed after the Sunni terrorists seized the country’s second-largest city of Mosul and a mass of territory in June 2014.

“We finished one battle but we are engaged now with a war for reconstruction,” said Mustafa al-Hiti, the head of Iraq’s reconstruction fund for areas affected by terrorist operations.

Among the hardest-hit areas is Mosul, which Iraqi forces, aided by Iranian-backed Shiite militias and a U.S.-led coalition, recaptured in July 2017. Their victory came at a steep cost for Mosul, as coalition airstrikes and terrorist suicide car bombs destroyed homes and government buildings.

Of the money needed, Iraqi officials estimate $17 billion alone needs to go toward rebuilding homes, the biggest single line item offered Monday on the first day of meetings. The United Nations estimates 40,000 homes need to be rebuilt in Mosul alone.

“The majority of the damage was to western Mosul, as it went through one of the worst and fiercest battles in history,” said Nofal al-Akoub, the governor of Iraq’s Nineveh province. It “led to the total destruction of its infrastructure.”

Al-Akoub said $42 billion was needed for his province alone, as it is home to Mosul. Iraq needs some $20 billion now to begin its reconstruction, al-Hiti said.

The war against the Islamic State terrorist group displaced more than 5 million people. Only half have returned to their hometowns in Iraq.

However, officials acknowledge a feeling of fatigue from international donors, especially after the wars in Iraq and Syria sparked the biggest mass migration since World War II.

President Donald Trump himself on Monday tweeted that America was “so stupidly spending $7 trillion in the Middle East, it is now time to start investing in OUR country.” The U.S. has no plans to make any new pledges at this week’s conferences. Even in Kuwait, some social media users questioned why more wasn’t being done in their own country.

Billions of dollars poured into Iraq after the 2003 U.S.-led invasion that toppled dictator Saddam Hussein, with what feels now like little visible effect.

The U.S. alone spent $60 billion over nine years — some $15 million a day — to rebuild Iraq. Around $25 billion went to Iraq’s military, which disintegrated during the lightning 2014 offensive of the Islamic State terrorist group, which grew out of al-Qaida in Iraq. U.S. government auditors also found massive waste and corruption, fueling suspicions of Western politicians like Pres. Trump who want to scale back foreign aid.

Meanwhile, the Middle East as a whole, especially countries like Kuwait whose deep pockets rely on oil production, have taken a hit in recent years as energy prices crashed and only recently began regaining ground.

Iraq, OPEC’s second-largest crude producer and home to the world’s fifth-largest known reserves, says it needs $7 billion to repair its oil and gas fields. It has struggled to pay international firms running them.

Kuwait, hosting the conferences this week, has a deep interest in seeing a stable Iraq, especially after Baghdad’s 1990 invasion of their small, oil-rich emirate. It announced $330 million alone had been pledged Monday for Iraq at a humanitarian conference in Kuwait City.

That money is desperately needed as more than four million children are in need of humanitarian assistance while three million are unable to regularly go to school in Iraq, said Geert Cappelaere, UNICEF’s regional director for the Middle East and North Africa. One out of four Iraqi children across the country live in poverty in the nation of 37 million people.

But Iraq needs more than just cash as thousands remain held after the rout of the Islamic State terrorist group, including women and children. It must renew its embrace of the rule of law, as well as provide answers to families whose loved ones went missing in the war, said Katharina Ritz, the head of the delegation in Iraq for the International Committee of the Red Cross.

“We know that many people think about, ‘OK, it’s the second time we have to rebuild Iraq,’ … (but) we have to get it right this time for the Iraqi people,” Ritz said.

“This will take time and probably it will also take generations to deal with the past, because if you look at the future, you also have to look back,” she added.